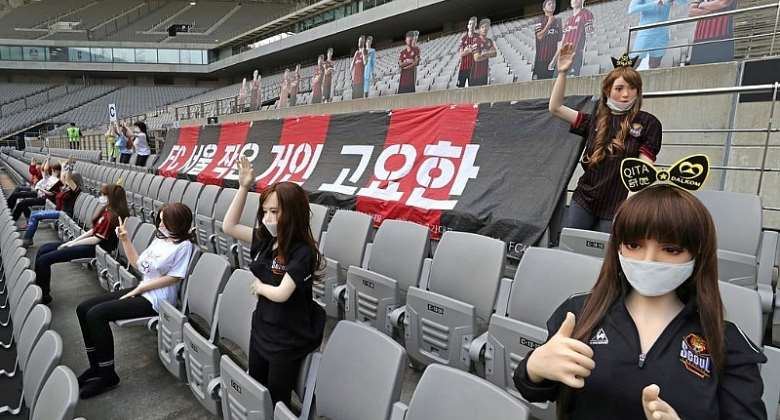 During the game there were complaints on social media about the dolls, some of which were wearing the club's shirt.

Others had been dressed in T-shirts or were holding placards advertising a sex toy seller and a popular online streamer who apparently inspired their design.

Matthew Binns, a writer for the South Korean football website kleagueunited.com, said authorities had to be seen to be acting swiftly.

FC Seoul apologised on Monday for causing deep concern to fans. The club claimed the dolls had been delivered due to a mix-up with the supplier. FC Seoul said that it had received assurances before the match that the dolls were not intended for sexual purposes.

But after reviewing the incident, the K-League's disciplinary committee accepted FC Seoul's claim that it did not know the mannequins were sex toys. But league bosses added: “The club could have easily recognised their use using common sense and experience.

Reputation
“The controversy over this 'real doll' incident has deeply humiliated and hurt women fans, and damaged the integrity of the league.”

FC Seoul accepted the decision, apologised and promised to prevent a repeat of the incident.

On 8 May, the K-League became the world's first major football championship to start playing after South Korea emerged from a lockdown to stem the spread of the coronavirus.

The season had been due to begin in late February, at the height of the country's outbreak.

Under new health protocols, spectators have been banned from the stadiums and clubs have attempted to add atmosphere by pumping crowd noises through the PA system and placing cardboard cutouts of fans and placards.

Championships in Europe are gearing up for a return. The German Bundesliga resumed last weekend after a two month lay-off as the country battled the pandemic.

While league authorities in France, the Netherlands, Belgium and Scotland have terminated their respective campaigns, Portugal's top flight is set to resume in early June.

England's Premier League also hopes to restart games later in June along with Italy's Serie A and Spain's La Liga.