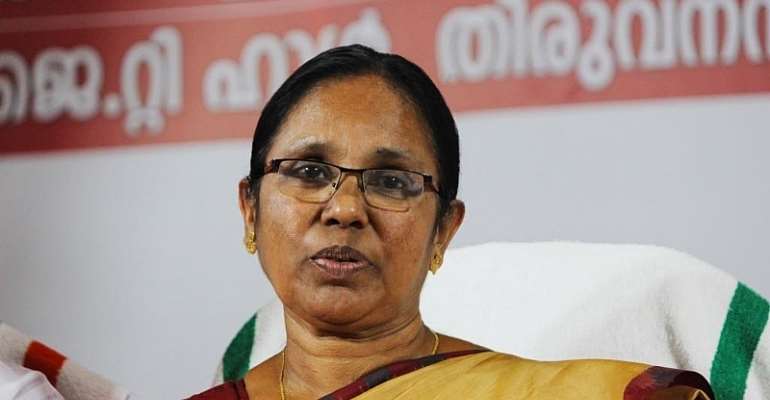 The southern state of Kerala could probably become the first state in India to flatten the COVID-19 curve. The state's first COVID-19 case was of a medical student who arrived from the Chinese city of Wuhan on January 24 and was diagnosed six days later.

It was the first coronavirus infection recorded in India and for several weeks, Kerala alarmingly topped the charts with more cases than elsewhere in the country.

Today, it has bucked the trend. Though it has a population of around 35 million - almost as big as Canada - it has reported just 642 cases and three deaths. The 'Kerala Model' is being talked around the country and the world as a success story.

Leading from the front is the health minister K K Shailaja, a former science teacher, who has earned a reputation for her prompt and efficient handling of the unfolding crisis. She is referred to by her nickname, the “Coronavirus Slayer”. RFI's correspondent Murali Krishnan talked to her:

MK: What were the measures you took to contain the infection?

In late January, the ministry set up 18 expert groups for different facets of the outbreak control, covering everything from contact tracing and screening, to logistics and mental health. We planned everything.

In the second phase, check-up facilities for diagnosis were arranged. Also there were arrangements for observing people who come from outside the state in airports, seaports and roads. The state continued to be vigilant.

MK: Was the health infrastructure in the state geared up for this outbreak?

The state's healthcare system works like a well-oiled system from bottom to top. We followed a strict quarantine rule of 28 days instead of 14 days for the high-risk cases.

We understood that for any contagious virus, the first thing to do is contact tracing and to break the chain. If we trace the contact properly, we can isolate the person from others and we can break the chain and flatten the curve of the epidemic. This is the same thing we applied here.

It is not the first time we are fighting a deadly epidemic. In 2018, the state had dealt with an outbreak of Nipah, a brain-damaging virus, where 17 people had died and we contained a potential disaster.

How about testing which is a problem in the rest of the country?

Moreover, the state has set-up walk-in sample walk-in sample kiosks (Wisks) in some areas, which is the first of its kind in India, inspired by similar models deployed in South Korea, for mass collection of samples from people with symptoms for COVID-19.  People can simply walk up to these booths and get throat swab test done.

We developed protocols including case isolation, contact-tracing and an alert community surveillance system. What's more our 'Break the Chain” campaign and the SMS (Sanitize, Mask and Social Distance) movement was important.

MK: Has it been a difficult journey?
We cannot let our guard down and have to be on our vigilant best. To our advantage we had community participation and a robust health system as well down to the primary health-care centers. Besides, sensing the situation the state promptly ordered a strict lockdown before India did it nationwide. Schools were closed, gatherings were banned and quarantines were extended.

How important was communication strategies in this fight?

The state government and local governments used WhatsApp, help lines and the network of health workers extensively to spread the message of safety and prevention. We also started publishing daily updates about quarantines, tests and hospitalizations.

The state leadership took a proactive part by holding press conferences at regular intervals to share information and answer all questions. They took an active part in even quashing any fake news circulating regarding the virus.

Moreover, 8000 mental health counselors have touched base with over 800,000 people. People in quarantine and those in reverse quarantine have benefitted immensely.