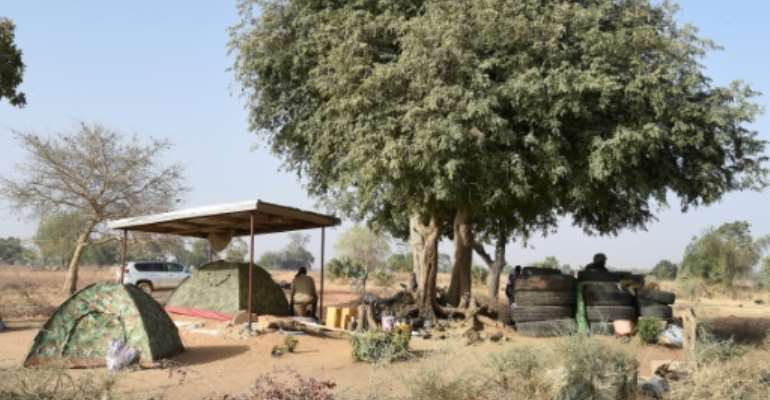 Togo is on the front line after its northern neighbour, Burkina Faso, fell prey to the jihadist chaos that had begun in neighbouring Mali. By PIUS UTOMI EKPEI (AFP)

In a makeshift bunker of sacks of rice beneath a tree, heavily-armed Togolese soldiers keep watch over villagers coming and going on foot or bike across the border with Burkina Faso.

In surrounding fields, peasant farmers are bent silhouettes, watering the sorghum and maize seeds sown before the arrival of the first rains.

Soon, clouds will chase away the fine dust of the harmattan, the desert wind that each year sweeps off the Sahara southwards to the coast and chokes the air.

Nothing dramatic, or so it would seem, ever happens at Yemboate, in Togo's far north.

Yet less than 30 kilometres (19 miles) away, over the border in eastern Burkina Faso, jihadists and militia groups have imposed their own brutal law.

Those policemen, doctors and teachers who have not fled are being hunted down and butchered.

"When I was small, we spent our time swimming in the river," says farmer Abdoulaye Mossi, leaning on his bike with a hoe, speaking to AFP before the coronavirus pandemic.

Nothing dramatic ever seems to happen in Yemboate, the northern Togo border post with Burkina Faso. Yet less than 30 kilometres (19 miles) away, over the border, jihadists and militia groups have imposed their own brutal law. By PIUS UTOMI EKPEI (AFP)

The arid channel separates his peaceful village of cob huts from a Burkinabe village on the other side.

But fear does not stop people crossing between the two countries, especially on Tuesday's market day, when they sell crops and cattle.

"They're never far away," he says, of the armed movements.

"They often come to have their motorbikes repaired. They will never tell you who the jihadists are, but we know," says Mossi, part of whose family lives in Burkina Faso.

The Togolese soldiers mount checkpoints and mobile patrols of the countless cross-border tracks through the bush that enable jihadists on motorbikes to blend into the civilian population.

After the fall of Burkinabe president Blaise Compaore in 2014, Togo's northern neighbour fell prey to the jihadist chaos that had begun in neighbouring Mali, fanned by the collapse of Libya.

Today, jihadists affiliated to Al-Qaeda and the Islamic State group threaten to pursue their expansion southwards in countries along the Gulf of Guinea coast -- Benin, Ghana and Ivory Coast, as well as Togo.

A year ago Benin witnessed the kidnapping of two French tourists and the murder of their guide in the Pendjari National Park.

In February, jihadists also attacked a police station near the border with Burkina Faso.

Another jihadist group has been holing up in the Comoe national park in northern Ivory Coast for the past eight months after being pursued by Burkinabe troops.

The coronavirus pandemic has inspired no ceasefires. In Mali, Niger and Burkina Faso, the number of clashes and attacks reached unprecedented levels last year.

According to local and foreign security sources, many parts of rural Ivory Coast, Togo and Benin have seen the awakening of "sleeper cells" -- people indoctrinated and trained to encourage ever more radical peaching in mosques and Koranic schools.

"The terrorist threat is real and the pressure is very strong… we feel it a little more with each day," Togolese President Faure Gnassingbe told AFP in February, while campaigning for re-election in Dapaong, the main northern town.

Flying by helicopter from the capital Lome, 650 km to the south, the head of state touched down in what has become a "red zone" for tourists, missionaries and foreign aid personnel, whose work was cut short by a Spanish priest's murder at a Burkinabe customs post.

Togo has been spared big attacks so far, but its territory has been infiltrated and the armed forces are racing to ready for the worst.

According to confidential military documents seen by AFP, almost 700 Togolese soldiers are deployed in the northernmost Savanes region on the border with Burkina Faso, engaged in Operation Koundjoare launched in 2018.

They keep guard at an invisible border of around 100 km, with Ghana to the west and Benin to the east.

The territory serves smugglers, highway robbers and all sorts of contraband -- ivory, weapons, drugs and, above all, gold, one of the main resources of the region.

In these remote areas far from coastal towns and economically developed zones, the trappings of state are mostly absent, so wildlife parks and dense forests have become a sanctuary for the jihadists.

Less than 30 km from the border, a much feared group has seized control in Burkina Faso's Pama forest reserve.

For two years, it has launched violent raids against travellers and security forces alike.

The fighters -- linked to the Ansaroul Islam movement accused of terrorising northern Burkina Faso and central Mali -- are behind the kidnapping of several Westerners in recent years, according to French security forces.

"The north of Togo can allow jihadists to rest up after long campaigns, or to fall back by merging into the population when pressure from the other side is too strong," one of the sources said, on condition of anonymity.

Where deep poverty prevails, winning villagers' goodwill is indispensable in the fight against jihadists.

"Our passage must be visible," Gnassingbe declared in Dapaong, warning the military against both "bullying" and "petty corruption".

Togo has been spared big attacks by jihadists so far, but its territory has been infiltrated and the armed forces are racing to ready for the worst. By PIUS UTOMI EKPEI (AFP)

Elected mayors and district administrators work hand in hand with religious leaders and traditional chiefs to obtain and pass on information.

Togolese authorities count on intelligence services equipped and trained by powers such as Israel, with whom Gnassingbe Eyadema, the president's father and political predecessor who ruled for 38 years, nurtured close ties.

An intelligence network intercepting communications and putting spies on buses has helped to "dismantle" several "terrorist cells", with dozens of arrests, according to the government.

Authorities claim that all those picked up are foreigners, mostly Burkinabes, who are extradited to their countries of origin.

The armed forces of Togo, Benin, Ivory Coast and Ghana have taken part in joint military operations with Burkina Faso since 2017.

"Cooperation is undermined by a culture of distrust between states," says Antonin Tisseron, an associate researcher with the Institut Thomas More, a conservative think tank.

Togo relies on an experienced army, which has taken part in several United Nations peacekeeping operations.

Most recruits are from the Kabye ethnic group in the north, which has served the ruling dynasty for more than half a century.

However, many people fear that the "struggle against terrorism" will also serve to silence critics of 53-year-old Faure Gnassingbe.

In power since 2005, the president has solid support from international partners led by France, despite criticism by human rights organisations of repeated abuse of political foes and activists.

Jihadists threaten to pursue their expansion southwards in countries along the Gulf of Guinea coast -- Benin, Ghana, Ivory Coast, as well as Togo. By PIUS UTOMI EKPEI (AFP)

Togo came through a serious political crisis in 2017 and 2018, with mass demonstrations calling on Gnassingbe to resign, particularly from the predominantly Muslim centre of the country.

"The countries of the Gulf of Guinea present many internal weaknesses," Tisseron told AFP.

"Poverty, the absence of jobs and prospects, the repression of all forms of social protest and the stigmatisation of Muslims create a breeding ground where jihadists can thrive."

The newcomers preach a more radical form of Islam than the reputedly moderate faith long practised by about a quarter of the Togolese population and strictly monitored by the state.

"It begins with 'raising awareness' among the masses, without open confrontation with the authorities," said a Western security source.

Fear does not stop people crossing between Togo and Burkina Faso, especially on market day. By PIUS UTOMI EKPEI (AFP)

"Once they feel strong enough, they kill the moderate preachers and then they attack police and gendarmerie posts."

Last year, a non-governmental organisation unknown to local Muslim authorities appeared in Dapaong, where Maman Amadou, the imam of the central mosque, is one of the rare religious leaders openly to challenge extremism.

"They started to preach radical Islam in about 15 villages and to build mosques," he told AFP.

"They even handed out money and motorbikes to young people. The people listened to them."

"We didn't know them and they answered none of our summons. We ended up alerting the authorities," Amadou said.

Under pressure, the organisation left town, added the imam, saying he had no more idea where they went than where they came from. "We never heard any more of them."

Ghana, Liberia set up joint committee to look into Buduburam...
7 minutes ago