By Chris Lefkow with AFP bureaus 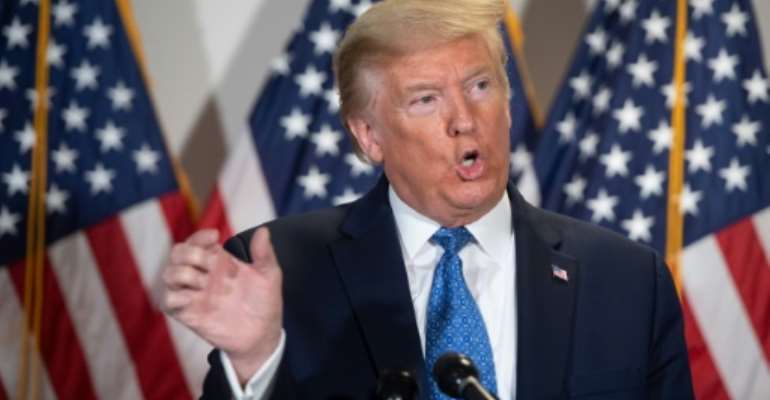 US President Donald Trump says he is considering holding the annual G7 summit at his Camp David retreat -- with participants attending in person. By SAUL LOEB (AFP/File)

US President Donald Trump said Wednesday he is considering hosting world leaders for the annual G7 summit at his Camp David retreat despite the ongoing coronavirus crisis, as the global death toll soared past 325,000.

Trump, who is seeking to revive the US economy and his political fortunes ahead of the November election, also lashed out again at China, saying its "incompetence" was responsible for "this mass Worldwide killing."

There was encouraging news, meanwhile, on the scientific front as two studies on monkeys published Wednesday offered hope that humans can develop protective immunity to the novel coronavirus.

Trump said in a tweet that the United States was "Transitioning back to Greatness" and he may hold the G7 in June in person, instead of remotely by videoconference as proposed previously.

"I am considering rescheduling the G-7, on the same or similar date, in Washington, D.C., at the legendary Camp David," he said. 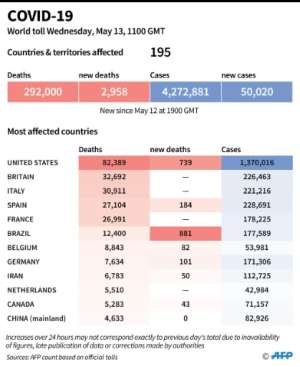 "The other members are also beginning their COMEBACK. It would be a great sign to all -- normalization!"

German Chancellor Angela Merkel said she would "wait and see what happens."

Trump, who has blamed China for failing to contain the outbreak after it originated in the city of Wuhan late last year, attacked Beijing in another tweet. 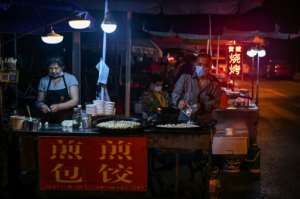 Food sellers wearing face masks wait for clients at their stalls in the Chinese city of Wuhan, where the coronavirus outbreak first erupted in late 2019. By Hector RETAMAL (AFP)

"It was the 'incompetence of China', and nothing else, that did this mass Worldwide killing," he tweeted.

Researchers reported progress from a study involving monkeys which looked at a prototype vaccine and another on whether infection with COVID-19 provides immunity against re-exposure.

Many governments see the development of an effective vaccine as the only surefire way to fully reopen their economies without risking increased death tolls. 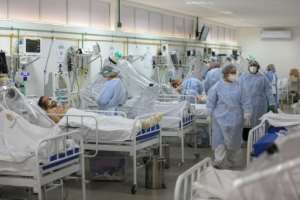 Brazil is now a global coronavirus hotspot -- here, health workers and patients are seen in a COVID-19 intensive care unit at Gilberto Novaes Hospital in Manaus. By MICHAEL DANTAS (AFP)

While Trump raised the possibility of holding the annual G7 summit as a sign of "normalization," Brazil reported a record number of deaths as the pandemic began hitting Latin America with full force.

With Europe continuing to ease lockdowns, Latin America has seen infections surge and now accounts for about 580,000 of the world's nearly five million confirmed cases.

Brazil has been hardest hit, rising to the third-highest number of cases in the world, and Peru, Mexico and Chile have also seen a steady increases in infections.

Health officials in Brazil reported 1,179 new coronavirus deaths on Tuesday, the first time the daily toll exceeded 1,000, but far-right President Jair Bolsonaro remains bitterly opposed to lockdowns, having described them as unnecessary over a "little flu."

With the outbreak in the world's sixth-largest country expected to accelerate until early June, many Brazilians are deeply worried about the next few weeks.

"Our country is going from bad to worse," said retiree Gilberto Ferreira in Rio de Janeiro.

And like Trump, he has promoted the use of anti-malaria drugs against the virus despite studies showing they have no benefit and could have dangerous side effects.

Chile is also suffering from a sharp rise in cases and deployed soldiers on the outskirts of its locked-down capital Santiago after clashes with protesters angry about food shortages and job losses. 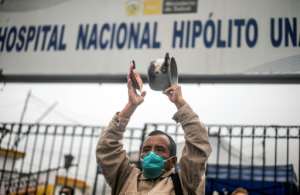 A health worker bangs a pot during a protest outside the Hipolito Unanue public hospital in Lima over the lack of protective equipment -- Peru now has more than 100,000 coronavirus cases. By ERNESTO BENAVIDES (AFP)

There were worrying signs in Argentina too, with authorities in Cordoba having to backtrack on easing lockdown measures following a sharp spike in infections.

Europe hopes to save tourism 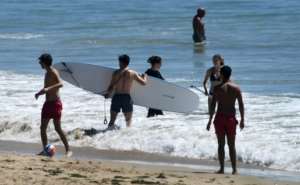 European officials are scrambling to try to save the summer tourism season, crucial for the continent's economies . By Fred TANNEAU (AFP)

Europe is meanwhile hoping the worst is behind it, with the number of new cases and deaths on a steady decline.

Lockdown measures are being eased in many parts of Europe, with residents enjoying some of their old freedoms.

"I haven't seen the sea for two months," said Helena Prades at a beach in Barcelona. "We just really wanted to hear the sound of the waves."

As Spain emerges from one of the world's toughest lockdowns, face masks are now mandatory for anyone aged six and over in public where social distancing is not possible.

European officials are scrambling to try to save the summer tourism season, which is crucial for the continent's economies. 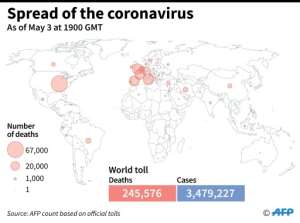 World map showing official number of coronavirus deaths per country, as of May 20 at 1900 GMT. By Simon MALFATTO (AFP)

With Greece suffering fewer than 170 COVID-19 deaths, Mitsotakis said its prompt response to the virus would be a "passport" to attract visitors.

In Italy, airports were given the green light to reopen from June 3, including for international flights. 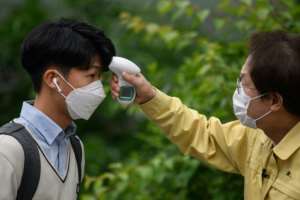 A South Korean student undergoes a temperature check at Kyungbock High School in Seoul as schools started reopening after a two-month break. By Ed JONES (AFP)

Countries in Asia have also been gradually reopening, with South Korean students lining up for temperature checks and given hand sanitizer as they returned to school after two months off.

And India said domestic air travel will resume on May 25 after a two-month shutdown, even as the world's second-most populous country reported its biggest daily jump in coronavirus infections, with 5,611 new cases in 24 hours.

Nearly 107,000 cases have been reported in India and more than 3,300 people have died, with experts predicting that infections will peak in June-July.