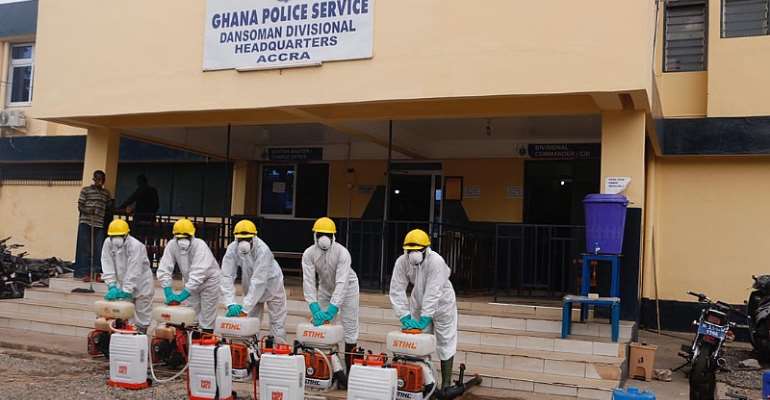 Instead, he explained that blood samples of both police personnel and inmates have been taken of which they were waiting for the results.

"I am the District Commander of Dansoman, and I am saying that blood samples have been taken from my station including mine and we are patiently awaiting the results. So I cannot make any confirmation on the matter,” Chief Superintendent Darko clarified.

The Dansoman district police commander was reacting to reports that his division had recorded two coronavirus cases during a disinfection exercise by Zoomlion Ghana Limited on Wednesday, May 21, 2020. Two other police facilities—Mamprobi Police Station and the Korle Bu District Police Headquarters, all in Accra--were also disinfected.

According to Chief Supt. Darko, though blood samples of officers and inmates had been taken to test for COVID-19 or otherwise, he emphasized that his personnel were not relenting in the performance of their duties.

...as officers, we are observing all the COVID-19 protocols in the performance of our duties. [This is because] a lot of people come here [referring to the Dansoman District Divisional Headquarters]. The citizenry always comes here to lodge complaints; we are still handling cases, and going to court as well,” the police commander said.

Continuing, he said that his division has put in place measures to prevent congestion in the various cells in his division.

These steps, he disclosed, included avoiding detaining suspects of all cases, taking witness statements, and where there is evidence they send such cases to the court.

“…and in cases where there is lack of evidence we grant bail for the suspects to go home because we have decided not to crowd our cells,” Chief Superintendent Darko revealed.

Asked the question of how his division was enforcing the preventive protocols at the Dasnsoman market which is only a stone throw away from them, the police commander indicated that his officers from time to time patrol the market to educate the traders.

“Even last two weeks, our community policing unit was there to enforce the social/physical distancing protocol in addition to the wearing of masks, and using alcohol-based hand sanitizers for their hands,” the chief superintendent recounted.

On this score, Chief Superintendent Darko expressed gratitude to Zoomlion Ghana Limited for partnering the Ghana Police Service to have its facilities disinfected against the global pandemic.

According to him, facilities disinfected in his division included both the male and female cells, barracks, various offices, and the whole compound of the Dansoman Divisional Headquarters.

To this end, he said all the preventive protocols regarding COVID-19 were strictly being adhered to by his officers.

For his part, the Mamprobi Police Commander, Chief Superintendent Cephas Arthur, who also had his station disinfected, intimated that the exercise will go a long way to sanitize both the police station and its environment.

“It will also protect us against the deadly coronavirus, adding that “it is a good exercise,” he said.

He went on to reveal that mass testing of his officers had been done recently but added that “we are waiting for the results.”

He, however, said some of the tests were voluntarily done as officers availed themselves for it.

“Additionally, we have Veronica buckets, detergents, hand sanitizers, which we make sure personnel as well as inmates and visitors to this place use in sanitizing their hands against the virus,” Chief Superintendent Arthur said.

At the Korle Bu District Headquarters, Police Commander Cephas Edezeami indicated that as part of measures to avoid crowding in the cells, his outfit has resolved not to detain suspects of lesser offenses.

“We ensure that suspects of cases which are not serious are not detained but granted bail to go home,” he said.

He, therefore, thanked Zoomlion for the exercise, stating that it will help contain the spread of the coronavirus at his station.