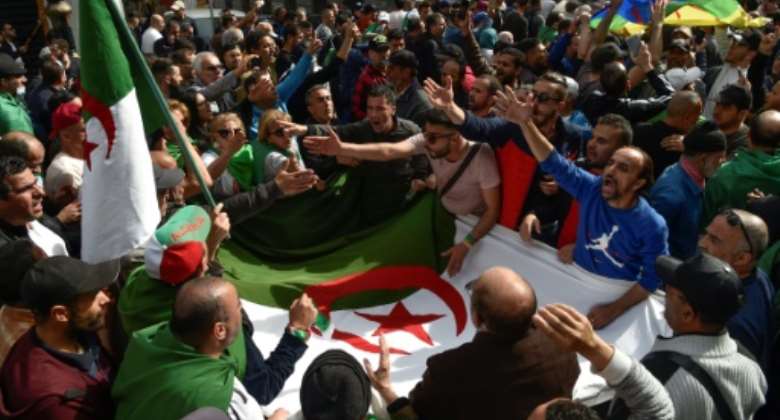 Algerian protesters gathered during a weekly anti-government demonstration in the capital Algiers on March 13 before the coronavirus outbreak halted such rallies. By RYAD KRAMDI (AFP/File)

Algeria has sentenced three opposition activists to jail over Facebook posts, in what rights groups said Wednesday was the latest sign of increased repression after the coronavirus lockdown stifled a popular protest movement.

Soheib Debaghi was sentenced in Algiers to one year in prison on charges of encouraging an illegal gathering, insulting an official body and publishing potentially damaging material, the National Committee for the Release of Detainees (CNLD) announced on its Facebook page.

The prosecution had called for three-year jail terms, at the hearing held by videoconference, the CNLD said.

Their lawyer, Abdelghani Badi, said on Facebook that Tahar was accused of having insulted President Abdelmadjid Tebboune by calling him "illegitimate", while Boudiaf had criticised the "injustice" of Algeria's judicial system.

Tebboune was elected on December 12 last year in an election marred by 40 percent turnout and boycotted by the country's "Hirak" protest movement.

Prosecutors in the western town of Ain Temouchent sought a nine-year sentence and heavy fine on Wednesday for detained Hirak activist Hicham Sahroui, who is also accused of insulting the president, according to the CNLD.

Weekly anti-government protests rocked Algeria for more than a year and only came to a halt due to the novel coronavirus outbreak, with the authorities banning marches -- although the opposition had already suspended its gatherings.

While some detained Hirak activists have been gradually set free, including Abdelouahab Fersauoui, who was released on Monday after eight months in prison, others continue to be arrested and prosecuted.

According to the CNLD, some 60 people are currently detained on charges linked to the protest movement.

Activists and analysts say Algerian authorities are using the pandemic as a pretext for crushing the Hirak movement.

"This is blind repression and an attack on the media, activists and social media," said historian Karima Direche, describing a "dying regime" swinging towards harsher authoritarianism.

A 25-year-old activist, Walid Kechida, has been held since April 27 for having posted memes on social media deemed mocking of Algerian authorities and religion. He risks facing a five-year jail sentence.

Late last month, Amnesty urged the authorities to end "arbitrary prosecutions aimed at silencing Hirak activists and journalists" during the pandemic, and called for the release of detainees.

The rights group said that authorities were endangering detainees' health, "given the risks of a COVID-19 outbreak in prisons and places of detention".

"The COVID-19 pandemic has been a boon for authorities," said Algerian academic Hacene Hireche, who believes the government is exploiting it to put a stop to protests.

"Their main concern since February 22 has been to end street protests. Everything has been done to that end: repression, manipulation, attempts to sow division, infiltrating the leadership ranks," he said.

"But nothing has worked -- the Algerian people have remained determined, united and aware of the issues. This is unprecedented," he concluded.

After causing the downfall of former president Abdelaziz Bouteflika after 20 years in power last April, the protest movement has continued demanding an overhaul of Algeria's governance system, which has been in place since independence from France in 1962.