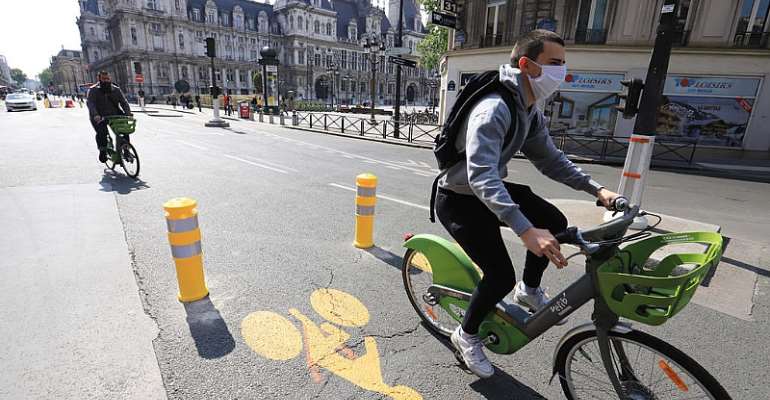 French commuters have adopted the bicycle en masse as they emerge from two months of Covid-19 lockdown, with a nationwide increase in cycling traffic of 44 percent over pre-confinement levels, according to data published Wednesday.

Whether in cities, suburban areas or rural communities, cycling routes around France have seen a 44 percent increase in traffic in the week following the end of nationwide coroavirus confinement on 11 May.

The increase is in comparison with the period before the nearly eight-week confinement that lasted from 17 March to 10 May, which itself saw a 62 percent decline in bike traffic.

The amount of traffic also marks an overall increase of 11 percent over the same period between 11 and 17 May 2019.

The figures were calculated from data gathered by 182 counters that register passing bicycles on cycling routes around the country and released Wednesday by cycling advocate group Vélo et territoire.

“What we've observed during the first week since the end of confinement is quite positive for the bike,” the group's Stéphanie Mangin told France Inter radio, adding the increase was all the more notable since many employees are still working from home.

However, the total number of cyclists was much larger in cities, where the countered logged an average of 1,188 passages per day, over a few hundred in the suburbs and the countryside.

Travelling by bicycle was becoming more common before coronavirus confinement.

Vélo et territoire also reported Wednesday that overall bike traffic in 2019 was up 5 percent over 2018 and 19 percent since 2013, when counters were installed.

But the coronavirus epidemic has provided even more incentives to get around by bicycle, whether to avoid the risk of infection on crowded public trains and buses or to avoid polluting the air in cars.

The government has also launched a 20-million-euro package to encouraging cycling, including 50-euro grants for bike maintenance and subsidies for parking areas, training and of bike lanes.

Since confinement ended, 20 cities have started or continued to expand their networks of bicycle lanes.

Paris Mayor Anne Hidalgo tweeted Wednesday that it was now possible to travel on bike lanes between the Bastille roundabout in eastern Paris to the La Défense business district west of the city.

Data showed Paris bike traffic has increased 50 percent in one year, with counters registered an average of 75 passages per hour between 11 and 17 May, up from 60 before confinement and 50 in the same period last year.

Even before the coronavirus epidemic, Paris and the surrounding Ile-de-France region began offering subsidies of up to 500 euros for the purchase of an electric bicycle.

Data for Paris also showed post-confinement bike traffic is more spread throughout the day and less concentrated in rush hour than before.