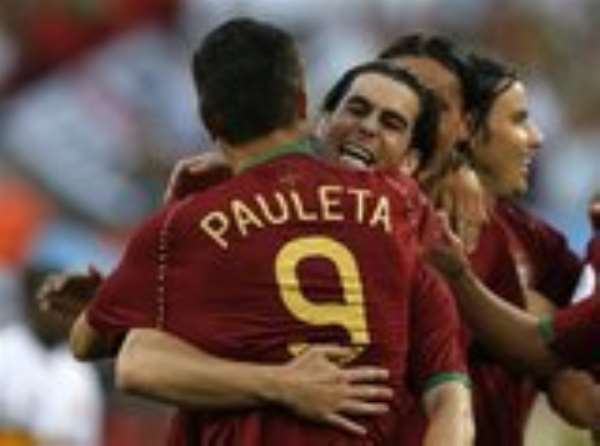 Pauleta's fourth-minute goal proved enough for Portugal to overcome the challenge of Angola in the Africans' first ever FIFA World Cup™ match in Cologne on Sunday, 11 June 2006.

Portugal's record goalscorer struck early to secure the three points for Luiz Felipe Scolari's side, who now sit second in Group D after the first round of matches, behind Mexico on goal difference.

The match:
1': Portugal clearly meant business as they took the game straight to Angola, with Pauleta bursting though after only 15 seconds and firing a warning shot across the face of Joao Ricardo's area.

4': Angola's defensive frailties were exposed again and this time Pauleta did manage to punish them with the game's opening goal. Portugal captain Luis Figo took on Angola's Jamba and squared the ball for the Paris Saint-Germain striker to easily convert the early opportunity (1-0).

11': Mendonca tried a speculative shot from distance for Angola, but Portugal goalkeeper Ricardo comfortably dealt with it.

15': Pauleta again proved a handful for Angola as he latched onto a high ball over the top and hooked it past the onrushing Joao Ricardo but the attempt crept past the stranded keeper's right-hand post.

23': Portugal's Simao Sabrosa had a neat interchange with Cristiano Ronaldo before blazing a drive over the bar, though the Manchester United winger looked unhappy his colleague from Benfica had not played him back in again instead.

24': Mateus, a late call-up to the Angola squad, sprinted at the Portuguese back line and was unlucky not find the target with a decent right-footed shot.

25': Loco supplied a cross for Angolan skipper Akwa and he brought roars of approval from the crowd in Cologne after an overhead kick which went over the crossbar.

35': Figo's corner was met by Ronaldo with a bullet of a header which smacked against the crossbar. A let-off for Angola.

42': Mendonca teed up Andre and he forced Richardo into a great save, diving to his right to concede a corner after the Al Kuwait midfielder blasted a stinging drive on target.

44': In a similar incident at the other end, Miguel laid the ball off to Ronaldo, who brought the best out of Angola's Joao Ricardo from inside the area.

Lucky escape
50': Ronaldo's hopeful shot looped high into the air and Joao Ricardo was deceived by the descending ball as he completely missed his punch, but he was spared embarrassment as the referee pulled play up for an infringement.

58': Pauleta, so threatening early in the match, again went close as he curled one in but Joao Ricardo, the goalkeeper without a club side, managed to get fully behind it.

61': This time Pauleta tried to turn provider, laying the ball off to Lyon midfielder Tiago, but his shot – Portugal's seventh on target - lacked true conviction and Joao Ricardo, was again able to deal with it.

68': After a positive spell for Angola, who seemed to be growing in confidence, Loco was presented with a half-chance to equalise from the edge of the Portuguese penalty area, but after waiting for the right moment to pull the trigger, he lashed his shot well wide.

84': With the Portuguese fans growing restless in their wait for a second goal, Figo whipped in a free-kick from the right and though Simao's header was firm, he could not keep it down.

89': As Angola finished strongly, Mateus had a clear sight of the target but could not beat the grateful arms of Ricardo in Portugal's goal.

92+': Maniche was unlucky not get more than a corner from a fierce shot from distance as Joao Ricardo tipped his attempt over the crossbar.

In conclusion:
Like England and the Netherlands before them, Portugal – one of the teams tipped to excel at Germany 2006 – had to settle for a narrow victory where the points mattered more than the performance. Angola can take heart from a battling display, however, on their debut appearance on the world stage.

On Voting Day: Media Tasked Not To Rush To Declare Their Own...
4 minutes ago