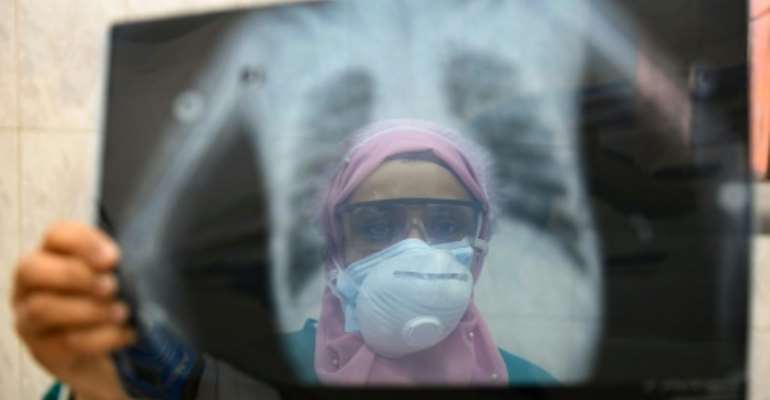 In this file photo from April 19, an Egyptian doctor checks a patient's lung X-ray at the infectious diseases unit of the Imbaba hospital in the capital Cairo. By Ahmed HASAN (AFP/File)

Hospitals have been hit by a flight of doctors abroad in recent years while the frontline staff left behind face shortages of medical supplies and protective gear that heightens the risk of infection.

The North African country of more than 100 million people has declared more than 13,000 cases and over 600 deaths from COVID-19 -- and daily new infections are still on the rise.

Since early May, the healthcare sector has indeed been approaching the "critical threshold of its capacity," said Ayman Sabae, a health expert at the non-government Egyptian Initiative for Personal Rights.

In recent years, as Egypt was shaken by political turmoil, many medical professionals have moved overseas in search of better opportunities, leaving it with just one physician per 1,000 people, according to the doctor's union.

As the virus caseload has mounted, the remaining healthcare workers have born the brunt of the crisis, often at very low pay.

"How can I build my life with a monthly salary of 1,800 Egyptian pounds (105 euros)? It's impossible," said Mohamed Ibrahim, a 26-year-old nurse at the Cairo Oncology Center.

To get by, Ibrahim works two jobs, also doing shifts in the private sector for a further 4,000 pounds (234 euros) per month.

A picture taken by a doctor at a Cairo hospital shows radiology technicians posing for a picture in a lab in the isolation ward for COVID-19 patients. By Yahya DIWER (AFP/File)

"We are terrified," said Ibrahim, adding that at least 17 of his colleagues had tested positive for the illness. "Who will help us if we all get infected?"

Another major concern, Mina said, has been a paucity of surgical masks which have been doled out only in driblets to healthcare providers -- a shortfall partially offset by donations from non-government groups.

At the same time Cairo has sent tons of masks and other personal protective equipment to several foreign countries in what analysts see as a bid to burnish Egypt's international image.

Many, including Mina, have criticised such aid initiatives as "incomprehensible".

Egypt this year allocated 1.2 percent of its gross domestic product, or around 4.3 billion euros, to the health system -- less than half of the three percent stipulated in the constitution, according to Sabae.

An Egyptian doctor adjusts the protective mask covering a young patient's face at the infectious diseases unit of a Cairo hospital. By Ahmed HASAN (AFP/File)

Nonetheless he believes the sector has shown a great "adaptive capacity" amid the crisis.

Authorities have opened dozens of test centres and are equipping some 35 hospitals to receive COVID-19 cases.

One million tests had been carried out by early May, of which 105,000 were PCR, according to Mohamed Awad Tageddine, health advisor to President Abdel Fattah al-Sissi.

Egypt, which was equipped with about 7,000 ventilators before the crisis, has also ordered new units, he said.

And Egypt's military, which has recently begun producing face masks, might even set up makeshift hospitals as a last resort, according to the EIPR group.

Curve yet to peak

Despite the desperate situation in the hospitals, Egypt has gradually eased confinement measures to revive the battered economy.

But it eased the restrictions in recent weeks, hearted by what is considered a relatively low infection rate in the youthful country where 60 percent of people are below 30.

Yet some experts fear the worst is still to come. While the number of daily deaths has remained relatively stable, daily new infections hit a record of 720 cases on Tuesday.

A picture taken by a doctor at a Cairo hospital on April 29 shows medical staff intubating a coronavirus patient. By YAHYA DIWER (AFP/File)

The doctors' union in early May urged the government to impose a total lockdown during the Islamic holy fasting month of Ramadan.

Prime Minister Mostafa Madbouli dismissed that option but on Sunday urged people to adhere to measures like wearing face masks as Egypt moves to relax restrictions.

Mina said in a Facebook post that "when the government shrinks curfew hours, it is basically telling people to do what they want ... It is a shame to then blame it on a lack of awareness".

Sabae warned that the "authorities really need to change their approach because Egypt has yet to reach the peak of the curve".