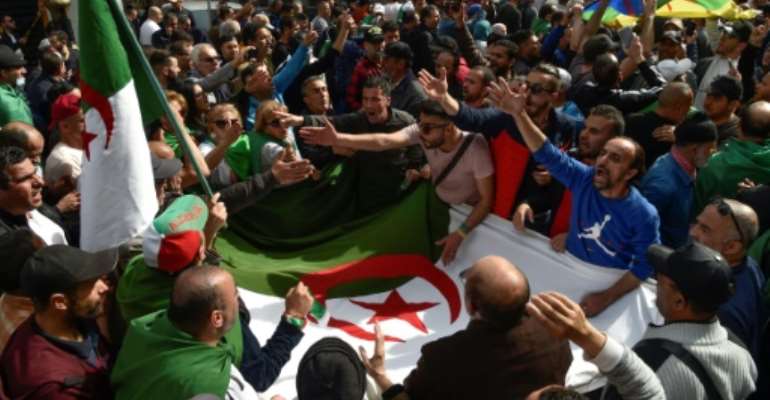 Algerian protesters gathered during a weekly anti-government demonstration in the capital Algiers on March 13 before the coronavirus outbreak halted such rallies. By RYAD KRAMDI (AFP/File)

Soheib Debaghi was sentenced to one year in prison on charges of encouraging an illegal gathering, insulting an official body and publishing potentially damaging material, the National Committee for the Release of Detainees (CNLD) announced on its Facebook page.

Weekly anti-government protests rocked Algeria for more than a year and only came to a halt due to the novel coronavirus outbreak, with the authorities banning marches -- although the opposition had already called a halt to its gatherings.

Activists and analysts fear Algerian authorities are using the pandemic as a pretext for crushing the Hirak protest movement.

According to the CNLD, around 50 people are currently detained over links to the movement.

Late last month, Amnesty urged the authorities to end "arbitrary prosecutions aimed at silencing Hirak activists and journalists" during the pandemic, and called for the release of detainees.

The rights group said that authorities were endangering detainees' health, "given the risks of a COVID-19 outbreak in prisons and places of detention".