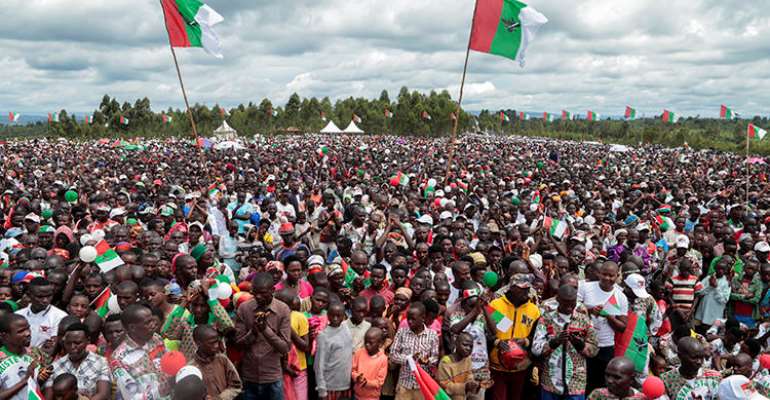 Supporters Of The Ruling Party Are Seen In Bugendana, Burundi, On April 27, 2020. CPJ Recently Joined A Letter Calling On Burundi To Maintain Internet Access During The Elections. (AP/Berthier Mugiraneza)

The Committee to Protect Journalists yesterday joined 30 other rights organizations in a joint letter urging the government of Burundi to ensure that the internet remains accessible before, during, and after the presidential elections scheduled for tomorrow.

In the letter, addressed to President Pierre Nkurunziza, the organizations, which are part of the #KeepItOn coalition against internet shutdowns, also call for the unblocking of all independent media websites and a guarantee that the public will be informed about any potential internet disruptions. Currently, at least three independent news websites are blocked in Burundi, according to the letter.

Burundi’s elections are taking place amid a hostile environment for the media, including the ongoing detention of four journalists from the Iwacu news website and government bans on the BBC and Voice of America broadcasters, as CPJ has documented.

Find here the full details of the letter:

#KeepItOn: Joint letter on keeping the internet open and secure during the presidential elections in Burundi

Re: Internet access will ensure increased participation and transparency in Burundi’s presidential elections

Your Excellency Pierre Nkurunziza, President of the Republic of Burundi

We, the undersigned organizations that make up the #KeepItOn coalition , a global network that unites over 210 organizations from 75 countries that seek to end internet shutdowns globally, write to urgently request that your office ensures the stability and openness of the internet and social media platforms before, during, and after the presidential elections in Burundi scheduled for May 20, 2020. We appeal to you, President Nkurunziza, to ensure that the internet and all other communication channels are open, secure, and accessible throughout the election period in the Republic of Burundi.

Access to the internet and social media platforms can significantly contribute to advancing citizens’ participation in important national events like elections, and citizens can use the internet to hold their elected leaders accountable. It is therefore important to guarantee an open, secure, and reliable internet.

We have received reports about the shrinking civic space in the country with increased reports of human rights violations , which has forced several journalists, activists, and opposition politicians to go into exile for fear of prosecution. We have also been informed that some independent media websites including Inzamba , Radio Publique Africaine (RPA) and Iwacu , remain inaccessible in Burundi, making it impossible for people to access information and content generated about the happenings in the country.

We are seriously concerned about the lack of an open and active civil society space in Burundi, which is essential for the success of any democracy. We use this medium to appeal to you to urgently adopt the necessary measures to ensure that freedom of expression and access to information rights are respected and guaranteed in Burundi.

Research shows that internet shutdowns and violence go hand in hand.[1], [2] Shutting down the internet during a deadly pandemic will add fuel to the fire. In addition, shutdowns will disrupt the free flow of information and shield human rights violations perpetrated within that period by both state and non-state actors from public scrutiny. Journalists and media workers will be unable to contact sources, gather information, or file stories about the electioneering process without access to digital communications tools.[3] Justified for various reasons, internet shutdowns cut off access to vital and life-saving information, and emergency services, plunging whole communities into fear.

Moreover, the technical means used to block access to information online often dangerously undermine the stability and resilience of the internet. Network disruptions also destabilize the internet’s power to support small business livelihoods and to drive economic development. Moreover, internet shutdowns will have a detrimental effect on people

Internet shutdowns violate fundamental human rights such as freedom of expression, access to information, and the right to peaceful assembly, among others guaranteed by national, regional, and international frameworks such as the Constitution of the Republic of Burundi, the Universal Declaration of Human Rights (UDHR), and the African Charter on Human and Peoples’ Rights (ACHPR).

The U.N. Human Rights Committee, the official interpreter of the International Covenant on Civil and Political Rights (ICCPR), emphasizes in its General Comment No. 34 that restrictions on speech online must be strictly necessary and proportionate to achieve a legitimate purpose.[4] Shutdowns, by contrast, disproportionately impact all users, and unnecessarily restrict access to information and emergency services communications during crucial moments. Shutdowns are neither necessary nor effective at achieving a legitimate aim, as they block the spread of information, contribute to confusion and disorder, and obstruct public safety.

As a coalition that believes in the internet as an enabler of all other human rights, we are confident that access to the internet and social media platforms can foster transparent and fair outcomes of the upcoming presidential elections through citizens’ active participation.

We, therefore, call on you to undertake the necessary measures to ensure that the internet service providers and relevant actors ensure an open, accessible, and secure internet across Burundi throughout this critical period.

We respectfully request that you use the important positions of your good offices to: