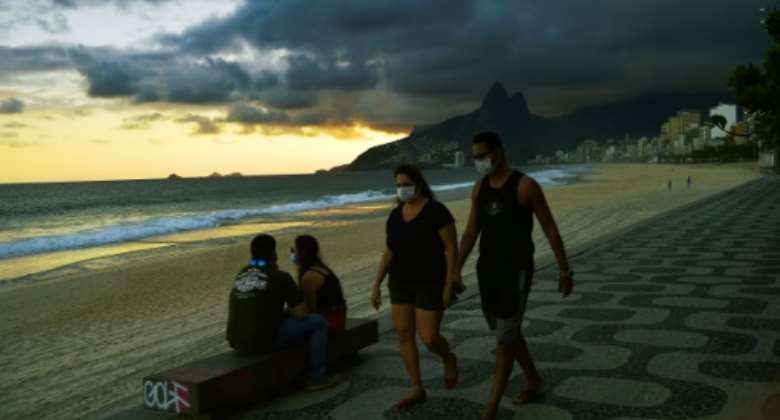 Brazil saw its highest number of coronavirus deaths yet Tuesday as, more than four months after COVID-19 first emerged in China, the force of the pandemic was beginning to hit hard in Latin America.

Brazil's surge came as the World Health Organization agreed to launch an investigation into its response to the disease, whose unyielding march across the globe since last year has left more than 320,000 dead and shattered economies.

The illness dismissed by Brazilian President Jair Bolsonaro as a "little flu" claimed 1,179 lives there in the past 24 hours, the first time Brazil's daily toll has exceeded 1,000.

World map showing official number of coronavirus deaths per country, as of May 19 at 1900 GMT. By Simon MALFATTO (AFP)

Infections -- already the third highest globally -- are also climbing by the thousands, with the outbreak in the world's sixth largest country set to accelerate, and the peak not expected until early June.

Chile also reported a spike in cases, and deployed soldiers in poor neighbourhoods in the capital Santiago following violent protests against food shortages and unemployment.

People wearing protective face masks in Shenzhen, China, on May 19, 2020. Chinese officials have accused US President Donald Trump of trying to damage the World Health Organization for political ends. By NOEL CELIS (AFP)

In the US the outlook remained bleak, with a new modeling average released Tuesday suggesting virus deaths could surpass 113,000 by mid-June, underscoring America's status as the nation worst affected by the pandemic and piling more pressure on President Donald Trump.

Benjamin Mburu, a Kenyan hockey player, practices stick work in his living room in Nairobi, Kenya, on May 19, 2020, with all training suspended by lockdowns. By Yasuyoshi CHIBA (AFP)

Trump has fiercely defended his administration's response to the crisis, repeatedly deflecting blame for the virus's spread on to Beijing and the World Health Organization.

On Monday he accused the WHO of being a "puppet" of China, and threatened to make permanent a temporary freeze on US funding to the body.

Beijing hit back Tuesday, with the foreign ministry accusing the US of trying to "use China as an issue to shirk responsibility and bargain over its international obligations to the WHO".

"We are against breaking everything there is for the sake of one state's political or geopolitical preferences," deputy foreign minister Sergei Ryabkov was quoted as saying by news agency Interfax.

A man wearing a face mask on a bus in Colombia on May 18, 2020. The force of the pandemic is beginning to be felt in Latin America. By JOAQUIN SARMIENTO (AFP)

The European Union backed the WHO too, saying it was "not the time for finger pointing" -- putting Brussels once again in opposition to Washington when it comes to Trump's treatment of international organisations.

With the row threatening the global response to the pandemic, WHO countries adopted a resolution calling for an "impartial, independent and comprehensive evaluation" of the international response, and the measures taken by the agency.

Both the United States and China voted for the resolution, brought by the European Union at the WHO's annual assembly, despite earlier fears that the tensions might make a full consensus impossible.

A man exercises in Paris, on May 19, 2020, as France eases lockdown measures. By FRANCK FIFE (AFP)

While the political row rages, countries around the world are trying to find a balance between bringing their economies back to life and risking a second wave of the disease.

The World Bank warned Tuesday that the crisis threatens to push some 60 million people into extreme poverty. The bank anticipates a five percent contraction in the world economy this year, with severe effects on the poorest countries.

In the US, Treasury Secretary Steven Mnuchin said the American economy risks suffering "permanent damage" the longer the lockdown continues. US home-building meanwhile plunged by 30 percent.

Fresh data also showed the number of unemployed in Britain soared nearly 70 percent to 1.3 million in three months to March.

The economic damage caused by the virus has led to unprecedented emergency stimulus measures by governments and central banks, and the latest came from Europe where France and Germany proposed a fund worth 500 billion euros.

The path back to normality is slow, however.

Football players in England's Premier League began returned to limited training on Tuesday, but the league suffered a blow when it emerged there had been six positive tests among players.

One effect of the lockdowns has been a drop in emissions from fossil fuels that cause global warming, with a 17 percent reduction globally in carbon pollution in April and a predicted drop of seven percent in 2020, research in Nature Climate Change said Tuesday.

However this would still "make barely a dent in the ongoing build-up of carbon dioxide in the atmosphere," said Richard Betts, head of climate impacts research at Britain's Met Office Hadley Centre.

'It doesn't harm you'

Experts have warned that the social distancing measures that have affected more than half of humanity will remain necessary until a vaccine or viable treatment is found.

The global race to find a vaccine got a boost Monday when results from a trial by US biotech firm Moderna sparked optimism.

In China, meanwhile, scientists at Peking University have said they are developing a drug that can help stop the pandemic by using antibodies that can neutralise the virus.

Trump, for his part, defended his bombshell announcement Monday that he was taking hydroxychloroquine, an anti-malaria drug that his own government's experts have said is not suitable for fighting the coronavirus.

"It doesn't harm you," he insisted during a Cabinet meeting at the White House Tuesday, adding that it "seems to be an extra line of defense."