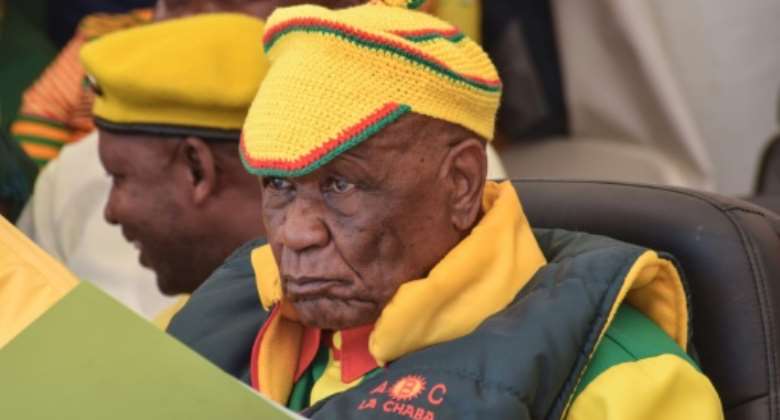 Tom Thabane, shown at a rally in March, married his current wife two months after his first wife died in 2017. By MOLISE MOLISE (AFP/File)

Thomas Thabane, who resigned Tuesday as prime minister of Lesotho, is a career politician whose second spell as premier was sensationally cut short after he was accused of conspiring in the murder of his wife.

Thabane stepped down just nine days before his 81st birthday.

He had already promised to exit the stage in July, two years ahead of schedule, citing his advanced age.

But in reality, he was forced out by dramatic allegations that he played a part in the death of his wife Lipolelo.

The 58-year-old was brutally gunned down in 2017 as they were in the process of divorce.

Two days after her death, Thabane was sworn in at a colourful ceremony at a stadium in Maseru, where in his inaugural speech he mourned the murder as a "senseless killing".

He and Maesaiah -- who at the time had the status of a "customary wife" -- both attended Lipolelo's funeral.

Maesaiah is considered a co-conspirator in the murder case and has already been charged with murder and is out on bail.

Thabane repeatedly denied any role in the murder but his refusal to step down quickly angered his party, prompting rivals to seek to force him out before his self-declared deadline.

In an apparent bid to frustrate his opponents, Thabane suspended parliament in March, deployed soldiers onto the streets to allegedly restore order, forcing neighbouring powerhouse South Africa into a rush of mediation shuttling.

His coalition government was eventually dissolved in parliament last week and his announcement on Tuesday put the lid on months of political uncertainty.

Thabane himself is no stranger to political turbulence.

He first came to power in 2012 as head of the country's first coalition government, formed after inconclusive polls.

But the alliance was marred by political bickering, which culminated in a coup attempt in August 2014 when soldiers attacked police posts and surrounded his official residence.

The failed putsch prompted him to flee to South Africa.

He returned home in February 2017, saying he still feared for his life, although he went on to win snap elections just four months later.

His victory stirred hopes of stability to the hilly country, which has a long history of political turmoil.

An old hand in Lesotho politics, Thabane founded the All Basotho Convention in 2006 after years of manoeuvering between political parties.

Before becoming prime minister, he served in various cabinet posts such as foreign affairs and home affairs.

In an exclusive interview with AFP last week, Thabane said he was looking forward to retirement and all he wanted was to be "left alone".

He has not yet been charged for the ex-wife's murder but when he briefly appeared in court in March, his lawyer sought to have him granted immunity. The case has not been heard yet.

Thabane said he would retire to his personal house in his constituency on the outskirts of Maseru.

He said he planned writing a book about his life, returning to the plays of Shakespeare, which he studied at university, and serving as a lay minister in his evangelical church.