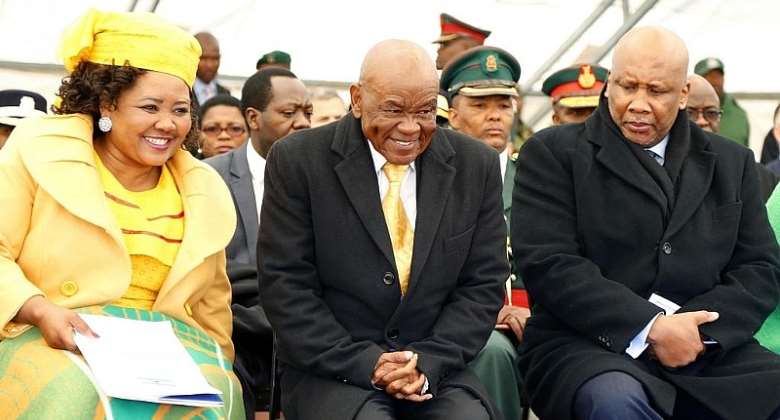 Lesotho Prime Minister Thomas Thabane resigned on Tuesday, after months of political crisis that included an investigation into the murder of his estranged wife, quashing parliament, and bringing out the army on the streets of Maseru in order to maintain order.

"I appear before you to announce that the work that you had assigned me may not be over but the time to retire from the great theatre of action, take leave from public life and office has finally arrived," he said in a national television address.

There had been calls for Thabane, 80, to step down after his estranged wife Lipolelo Thabane, 58, was shot dead outside her house just two days before his inauguration in 2017.

The two were embroiled in a messy divorce that kept the issue on the front pages of the local press before her murder.

Police said they found evidence that his mobile phone number was in the communications records from the day of the murder.

Those within his All Basotho Convention (ABC) party and opposition political rivals called for Thabane to resign.

After pressure from all sides, Thabane said earlier this year that he would leave office by 31 July due to his age.

"But because of the deeply entrenched political polarisation in our society, some decided to use my announcement for political gain while others resigned themselves into further entrenching divisions among Basotho," he said on Tuesday.

New prime minister on Wednesday
He could be referring to trying to block the legislature last March, suspending parliament after the National Assembly voted against him calling for new elections if he lost a no confidence vote.

In April the constitutional court overturned his suspension of parliament. He deployed the army on the streets of the capital to act against “rogue national elements” for the day.

Although Thabane is still at the head of the All Basotho Convention (ABC) party, the ABC and the opposition moved to nominate Finance Minister Moeketsi Majoro as his successor.

King Letsie III, Lesotho's supreme ruler, is expected to appoint Majoro at premier and will likely be sworn in on Wednesday.

The murder trial
Thabane's current wife Maesaiah Thabane, 43, whom he married just two months after his estranged wife's death, is out on bail after being charged with murder.

There is no indication that Thabane could be charged with murder as a co-conspirator, but others speculate he brokered a deal before stepping down in order to avoid being charged.

Thabane has repeatedly denied participating in any part of this then-wife's murder.

Two weeks ago, Reuters newswire ran a story citing that a mediator, businessman Teboho Mojapela, had met with Lipolelo to try and broker an agreement for divorce on the day she died.

Latest Photo Reports
Catch up with all the political quotes from our politicians.
Advertise here
More Europe
ModernGhana Links
WK: Sword carried by Napoleon in 1799 coup goes up for auction in US
Why France and the Middle East have such a deep and lingering past
Pope accepts Paris archbishop's resignation over 'ambiguous' relationship
Dozens of rights groups demand EU blacklist on Pegasus spyware
France clinches historic €17bn deal with UAE for warplanes, helicopters
France rejects British joint border patrols to fight Channel migrant crisis
Anger and doubt over Belgian handling of Paris terrorist mastermind
France's Macron travels to the Middle East in search of major contracts
After 16 years of rule, Angela Merkel says goodbye with Nina Hagen song
TOP STORIES