By Edward Webster - The Conversation 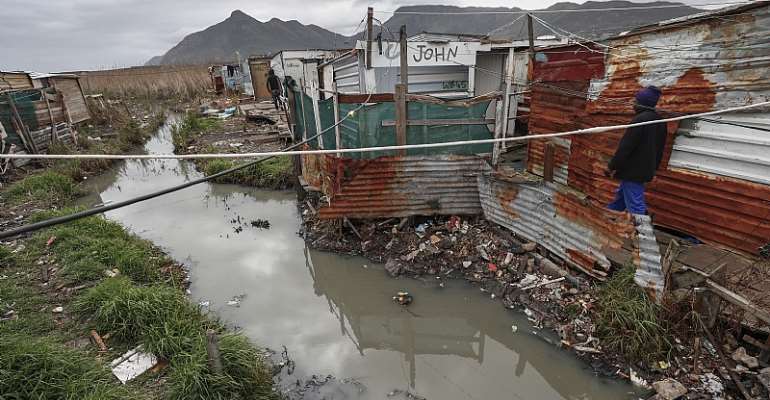 Persistent rampant povery has been blamed on the compromises made by the African National Congress during negotiations to end apartheid. - Source: EFE-EPA/Nic Bothma

Economic inequality in post-apartheid South Africa has deepened . This is not what was expected. Firstly, the African National Congress (ANC) won an overwhelming victory in the 1994 elections and promised to significantly reduce inequality in the world's most unequal country. Secondly, the country's constitution, adopted in May 1996 , foregrounds the promotion of social and economic rights.

This paradoxical outcome has led to a ferocious political-economic debate on the nature of South Africa's transition to democracy.

On the one hand, there are those who argue that in the 1994 settlement the leaders of the liberation movement sold out their socialist commitments to the white minority, in particular, international and local capital . This conserved the pillars of the apartheid economy, the minerals-energy complex .

On the other hand, there are those who argue that the ANC had no alternative to the Washington consensus approach to the economy in the 1990s. They say it was always a party of a mixed economy, the right to trade freely and the growth of a black business class.

Among the exponents of this view are Thabo Mbeki , the key figure in shaping ANC economic policy as deputy president from 1994 to 1999, and Trevor Manuel , finance minister at the time.

A new book, Shadow of Liberation , by Vishnu Padayachee and Robert Van Niekerk, respectively Distinguished Professor of Development Economics and Professor of Public Governance at the University of the Witwatersrand, challenges both approaches. It revisits how economic and social policies were made from the late 1980s to the mid-1990s. The authors draw on 35 in-depth interviews with participants in the policy process. This pool of original data is complemented by a rich archive of primary and secondary sources. Together, these data sets reveal a fascinating story about who shaped these policies and how.

The book is the first attempt to comprehensively document and interpret the origins and evolution of the ANC's economic and social polices.

The authors argue that the ANC lacked economic expertise – and spurned what little it had. In particular, it rejected the evidence-based analysis and recommendations of the MacroEconomic Research Group, which it had commissioned. They argue that it was less a case of the ANC “selling out” and more one of being outmanoeuvred. Policy makers were, Padayachee and Van Niekerk conclude (p. 135),

Intellectually seduced in comfortable surroundings and eventually outmanoeuvred by the well-resourced apartheid state and by international and local pro-market friendly actors.

The story of the evolution of the ANC's economic policy is a complex one. The authors take us on a long journey that begins in the 1940s. The rest of the journey is spread over nine chapters. Chapter 2 shows how the party's economic and social roots lie in social democratic policies. These ideals can be found in the bill of rights in African Claims , developed in 1943.

African Claims was a document with a recognisably social democratic impetus. It argued for state intervention to secure social rights to health, education and welfare for all. This was to be based on universal political and social citizenship. These aspirations can also be traced to what the authors call the “Keynesian, social democratic welfare state, based on the social rights of citizenship” in the Freedom Charter adopted in 1955 (p. 22).

The next chapter connects the past to the dawn of democracy and the formation of the ANC's economic planning department. The authors argue this consisted of a small group – Trevor Manuel, Alec Erwin, Maria Ramos, Neil Morrison, Moss Ngoasheng, Leslie Maasdorp – who came to believe that there

was no alternative to neo-liberal globalisation (p. 67).

The pace quickens in chapters 4, 5 and 6 – the empirical heart of the book. The authors show how the ANC distanced itself from the post-Keynesian MacroEconomic Research Group in December 1993, and then abruptly dropped the popular “growth through redistribution” Reconstruction and Development Programme in April 1996.

At the centre of the book is a powerful critique, not only of the policy outcomes, but also of the way in which the policies were made. Yet the critiques sometimes feel incomplete.

There is a substantial body of literature on the “politics of economic reform” that could have been drawn on to deepen Padayachee and Van Niekerk's argument that widespread consultation and negotiation is vital for successful economic reform. In fairness, the refusal to negotiate the Growth, Employment and Redistribution macroeconomic strategy for South Africa in the National Economic Development and Labour Council is rightly criticised and the authors show admirable awareness of the issue.

The late post-Keynesian American economist Hyman Minsky's famous observation, made over 30 years ago and rightly quoted by the authors, makes the point:

Economic issues must become a serious public matter and the subject of debate if new directions are to be undertaken. Meaningful reforms cannot be put over by an advisory and administrative elite that is itself the architect of the existing situation (quoted on p. xi of the book under review).

Tragically, it is precisely what unfolded in South Africa in the 1990s.

Speaking to the present

Although the book examines events nearly three decades ago, it speaks to the present where the demand for rapid economic reform has become widespread.

The lesson I draw from the book is that economic reform cannot be undertaken by a small group of people. Instead, policies must be formulated and implemented through negotiation and consultation of a social compact beyond the state and parliament to include unions, employers and other interest groups .

What I argued in 1998 remains true today:

Labour retains the power to block the imposition of economic reform – both at the national and workplace level. Any attempt to impose neo-liberal solutions unilaterally is likely to take the country down the path of ungovernability and civil war – it will ensure rather than avert chaos. If, at the same time, socialist solutions seem unfeasible, this conclusion points towards a class compromise between capital and the labouring poor: a Southern version of social democracy.

The insights in Shadow of Liberation complement this claim, while developing new interpretations based on evidence from face-to-face interviews with the key actors as well as new archival material. It is a necessary read for a new generation of policymakers as they confront the challenge of economic reform. Above all, this book is a major contribution to the growing body of literature on the appropriate policies required to reduce inequality in the global South.

This is an edited version of a longer article published in the June issue of the African Review of Economics and Finance .

The Southern Centre for Inequality Studies is funded by the Ford Foundation. I also receive funding from the Friedrich Ebert Stiftung.

Article
Powered By Modern Ghana
The Missing Gap In The #EndSARS Struggle: Police–Government Relationship Or Police Independence?
GIADEC Not Conforming To National And International Transparency And Environmental Standards
What South African women told us about being the main breadwinner
We must make moral choices about how we relate to social media apps
Seychelles is likely to maintain its record of free and fair elections in upcoming polls
#EndSARS: What it feels like to be in the shoes of a young Nigerian
Pasha 83: Talking #EndSARS and the new proposed unit
A Recipe For The War
FREE SHS: Akufo-Addo’s Populist Slant Versus Mahama’s Transformational Approach
COVID-19 Updates Live Dashboard
TOP STORIES