In Burundi, abuses persist in the shadows: rights groups 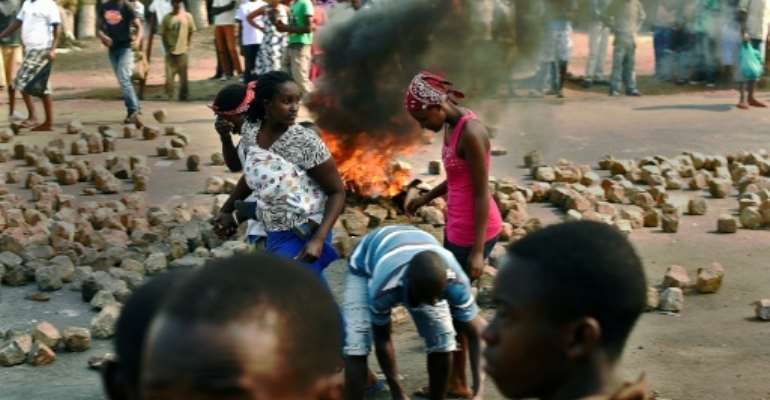 Protests erupted in Burundi in 2015 over President Pierre Nkurunziza's decision to bid for a third straight term. During the ensuring crackdown, more than 1,200 people were killed and 400,000 fled the country. By CARL DE SOUZA (AFP)

Three years after fleeing persecution in Burundi for refuge in Tanzania, Jean Magorwa returned home, lured by assurances of peace and reconciliation.

His family have not heard from him since, and are convinced he is dead.

Rights groups say Magorwa is a victim of the political violence that erupted in 2015 and persists today, covered up by a ruling party determined to retain power after Wednesday's presidential and general elections.

Many of those targeted in the brutal crackdown after Burundi's last election were opposition supporters like Magorwa.

He backed Agathon Rwasa at the time, who is running for president in this election against a general chosen by Burundi's ruling class.

Fleeing over the border, Magorwa lived in a refugee camp until coaxed back to Burundi by assurances from the governing CNDD-FDD party that it was safe to do so.

In September 2018 he arrived with a friend in Rugusu, in Burundi's east.

He left his wife and two children behind, with plans to bring them over later, said Pacifique Nininahazwe, who heads Ndondeza, an organization that investigates enforced disappearances.

But the pair were almost immediately detained by the Imbonerakure, the ruling party's youth league, and handed over to the National Intelligence Service (SNR).

"His family lost track of him from then on... today they have lost all hope of finding him alive," he said.

President Pierre Nkurunziza's decision to run for a third term in 2015 plunged Burundi into a violent political crisis, with street protests, a failed coup and a bloody retaliatory purge.

At least 1,200 people died and 400,0000 fled Burundi between April 2015 and May 2017, estimates the International Criminal Court (ICC), which opened an inquiry into the post-election chaos.

But the bloodshed did not stop there, despite promises to the contrary by the government.

Instead of playing out on the streets, the crackdown simply retreated to the shadows, says the Burundi Human Rights Initiative, a watchdog group.

"Serious human rights violations continued in 2019, but were often hidden and quickly covered up, making it difficult to establish the circumstances in which they took place," it said in January in a report entitled "A Facade of Peace in a Land of Fear".

Iteka, Burundi's oldest rights organization, says a far greater number died in the repression that followed the 2015 election than the ICC established.

It has documented 2,245 people killed and 555 missing since 2015, according to the president of the banned group, Anschaire Nikoyagize.

"The state violence has continued in a systematic way, even if we see that from 2018 they have begun a change in their criminal strategy and methodology to protect the perpetrators of these crimes," Nikoyagize told AFP.

The Imbonerakure, which the United Nations has described as a militia, and the feared SNR, were the main instigators of the post 2015 clampdown, with the police and the army playing smaller roles, observers say.

The Imbonerakure, working closely with the SNR, has only expanded its campaign of terror in the years since, said Nikoyagize.

They "mainly resort to enforced disappearances to hide their crimes," he said.

Carina Tertsakian, a researcher for the Burundian Human Rights Initiative, told AFP it had become "more difficult and riskier" to record abuses in Burundi.

"There is no one left in terms of international observers" since the closure of the UN's human rights office in Burundi in 2019, she said. The office was shut at the insistence of the government.

The UN Commission of Inquiry on Burundi, established in 2016 by the Human Rights Council, said some of these abuses could constitute "crimes against humanity".

President Nkurunziza, who is not standing for re-election this time, had contributed to this by his "recurrent calls for hatred", the commission said.

The ruling party has named Evariste Ndayishimiye as its candidate for the 2020 election.

The party secretary general since 2016, he is reputed to be more open than Nkurunziza, but has been criticised for failing to prevent the rising abuses of the Imbonerakure.