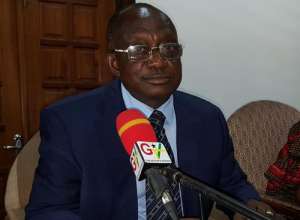 From now onwards, person that will be arrested without a face mask in Kumasi, the Ashanti Regional capital, will be punished with mandatory communal labour in public.

The Ashanti Regional Coordinating Council (REGSEC) directive is intended to force people to wear face masks as a means of preventing the spread of Covid-19 in the region.

Reports making rounds indicated that several offenders were nabbed in the city centre last Saturday, and they were made to either sweep or weed in public.

The Ashanti Regional Minister, Simon Osei-Mensah, commenting on the latest directive, disclosed that people, for strange reasons, were refusing to wear face masks in public, thereby putting others in danger.

The unfortunate development, he explained, has the potential of increasing the number of people infected with the virus, for which reason REGSEC has to intervene.

He said REGSEC had decided to introduce communal labour rules as a means of ensuring that residents in the region, notably Kumasi, would wear face masks to check the spread of Covid-19.

Mr. Osei-Mensah said REGSEC had realized that the prisons in the region are congested and cannot, therefore, detain people unnecessarily, adding “we also don't want to infect the prisoners with the virus by sending people there.”

“Again, we have realized that most of the people don't have the financial muscle to pay spot fines, so REGSEC believes that the communal labour is the best option,” he stressed.

He said the Ashanti Regional Coordinating Council (RCC), of which he is the head, has frequently embarked on public education for people to wear face masks to help stop the spread of the virus.

He said the communal labour would help to keep the city clean, adding “it will also compel the people to wear face masks and stay safe.”