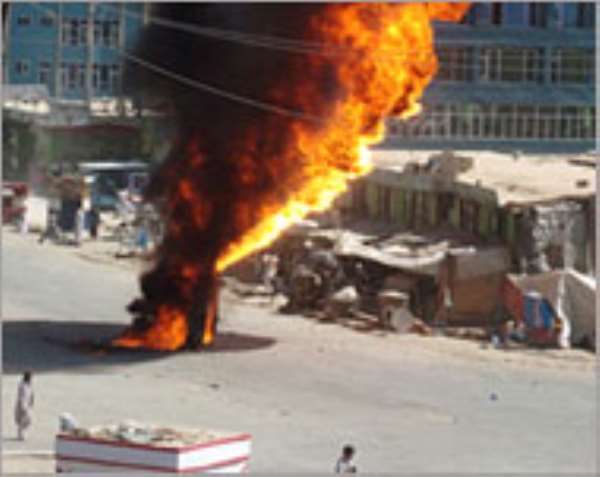 The suspected insurgents were killed on Friday in an army sweep of an area around Tirin Kot city, the capital of Uruzgan province.

"Among the 13 bodies at the site, two are Pakistani nationals. They have Pakistani ID cards," General Rahmatullah Raufi, the Afghan army commander for southern Afghanistan, told AFP.

Uruzgan, where 1,400 Dutch troops are deploying to be part of a Nato-led force that is moving into southern Afghanistan, has seen some intense battles in recent weeks.

Nearly 50 civilian aid workers, Afghan and expatriate, have been killed in Afghanistan since 2002, the year after the Taliban were removed from power and launched an insurgency that is growing more deadly every year.

Shir Jan Durani, the provincial police spokesman, said the victims were believed to be from the Co-ordination of Humanitarian Assistance organisation that works in the health, agriculture and education sectors.

He said: "We can't say who did this but it is the people who are against peace in Afghanistan."

In another attack, three Afghan policemen were shot dead near the border with Iran.

Mohammad Ayob Salangi, the provincial police chief, said that in the western Herat province bordering Iran, three border policemen were shot dead while on patrol in their vehicle late on Thursday.

On Friday, police said they arrested the Taliban commander of several districts of southwestern Nimroz province who was responsible for "terrorist activities" including the killing of four policemen.

The commander, Mulla Manaan, was arrested with arms and a vehicle. He a district governor during the 1996-2001 Taliban rule.

Yousuf Stanizai, the ministry of interior spokesman, said: "Some days ago when there was an attack on police in which four police were killed and a police vehicle was set ablaze, he [Mulla Manaan] was involved and was leading it."

In Ghazni, southwest of the capital, a roadside bomb killed three Afghan soldiers, while Taliban fighters killed two policemen in an ambush in Kandahar in the south, Aljazeera said.

Nato is expanding its force from 9,700 to 16,000 by late July, doubling international troop numbers in the southern region, which was the Taliban's heartland.