Young Tunisians eat in secret despite Ramadan and lockdown 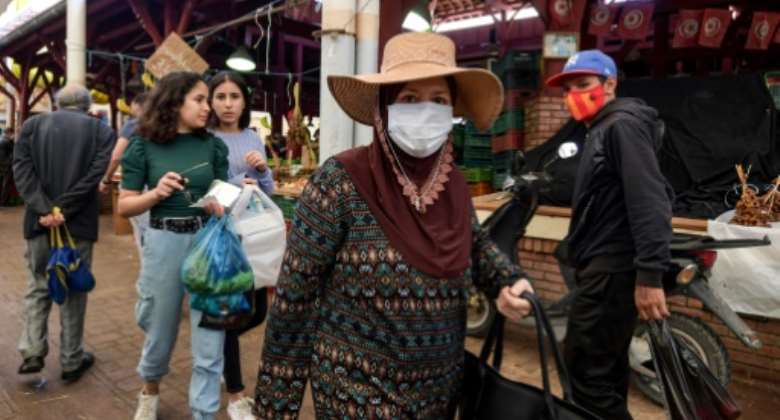 Shoppers browse through the central market in Tunis during the fasting month of Ramadan. By FETHI BELAID (AFP/File)

Hiding snacks under their beds or behind piles of clothes, young Tunisians are finding ways to subvert the Ramadan fast -- despite being locked down with their Muslim conservative parents.

The generation gap in religious observance is not new but it took on a new dimension this year as the fasting month coincides with strict movement restrictions to halt the spread of the novel coronavirus.

A Facebook group for Tunisians seeking to circumvent social pressures and eat during the day has attracted some 12,000 members.

"How can you hide your food during the day and eat without being spotted by your parents?" one asked.

Among the more imaginative suggestions: eat whilst showering, or if you are a young woman, pretend to be on your period: Islam allows menstruating women to forego the dawn-to-dusk fast.

Tunis resident Zahra, a 23-year-old student and member of the "Fater" ("fast-breaker") group, said she had used that excuse or hid in order to eat but her mother was not fooled.

"I told my mother I'm not a Muslim anymore, but she still acts like she doesn't know," said Zahra, adding that she had given up fasting two years ago.

"A lot of people are afraid of being kicked out of home. I'm not, but if I tell my parents I'm not fasting, they'll imagine (I'm doing) worse things."

The North African country's post-revolution constitution guarantees freedom of conscience, but there are no clear laws against eating in public during the holy month.

But every Ramadan, the police arrest people caught eating or smoking during the daylight hours, citing vague "public decency" legislation or a decades-old directive.

Many young Tunisians face family pressure to fast -- something harder to avoid this year as the lockdown to battle the spread of coronavirus means they have to stay home.

Yasmine, a 19-year-old student who gave up fasting four years ago, said she drank water secretly during the day.

"I'm afraid I'll be despised if I tell my family," she said.

Many young Tunisians face family pressure to fast during Ramadan, something harder to avoid this years as the lockdown to battle coronavirus means they have to stay home. By FETHI BELAID (AFP/File)

Imen, 26, said there is a "generation gap" when it comes to fasting.

She normally lives alone in Tunis, but is spending Ramadan with her parents in the coastal town of Nabeul.

She said she wanted to "admit" that she had given up fasting "but everyone's super stressed with the lockdown".

"It would hurt my mother... My father knows, but we don't talk about it," she said.

She added that while Tunisians are largely tolerant, "Ramadan is a special time when people feel they have a right to judge you."

"Young people think differently and the media doesn't reflect that," she added.

In normal years, some cafes in Tunis often stay open during Ramadan, with newspaper obscuring the windows to give customers privacy.

For some people, the pressure has eased in recent years.

"My father realised I was eating, but he's open-minded and laughed," said Azer, 36.

He added that he regularly eats in front of his colleagues and that in recent years he has felt "less judged".

Eating during the daytime in Ramadan is "less of a social taboo than before" but many non-fasters "can't eat at home out of respect for their families".

Tunisia has had vigorous public debates on individual freedoms since its 2011 revolution along with demonstrations for the right to eat in public. By FETHI BELAID (AFP/File)

"I find it a bit hard being a hypocrite," said Walid, a 40-year-old living in confinement with his parents.

"I hate hypocrisy in society; people who have sex (outside marriage), steal and drink alcohol then suddenly become really religious for 30 days."

While it is impossible to measure how many people break the fasting norms, all those contacted by AFP said they knew many people who weren't fasting.

Tunisia has had vigorous public debates on individual freedoms since its 2011 revolution, along with demonstrations for the right to eat in public.

Yet nine years on, police are still able to "arrest non-fasters for attacking public morals", said Anoir Zayani of the Association for the Defence of Individual Freedoms (ADLI).

ADLI and the Tunisian League for Human Rights (LTDH) have warned of a rise in populist conservative rhetoric "demonising" campaigns for such freedoms -- particularly during Ramadan.

"We are accused of wanting to disrupt the Tunisian way of life," Zayani said.

For him, "exercising freedom would not affect the Tunisian way of life, but will create enriching diversity".