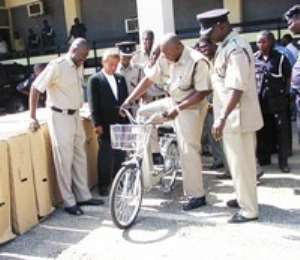 An official of the Police Service, trying one of the electronic bicycles donated to the Ghana Police Service by a Japanese investor, Mr. Yoshimasa Foejima as he looks on.

Also in the picture are DCOP Yaw Adu Gyamfi (right), Director-General, Technical and General Services, and other police officers.

Mr. Foejima, President of the Hojun-G Company presented 15 of the bicycles to the Ghana Police Service at a ceremony at the Police Headquarters in Accra on Wednesday.