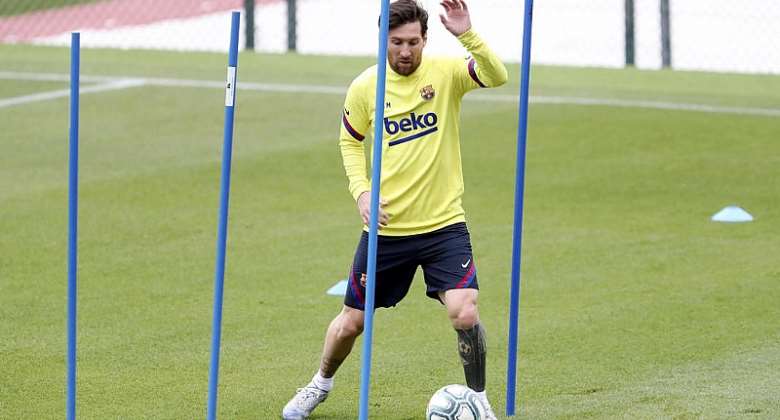 Spanish football clubs began training in groups of 10 players on Monday as part of their potential return to competitive action next month.

La Liga was suspended in March as the Spanish government tried to contain the spread of the coronavirus pandemic.

Spain has been one of the worst affected countries with more than 231,000 confirmed cases and nearly 28,000 deaths.

Even though teams like Real Madrid, Barcelona and Atletico Madrid are based in badly hit regions, their players have been able to resume.

"It is a ministerial decision,” said Javier Tebas, the president of La Liga. “It was very important that all teams could train in the same way,"

As Spanish players reacquainted themselves with their training grounds, their counterparts in England were given the all-clear to begin sessions in groups of up to five from 19 May.

Premier League clubs unanimously voted on Monday to allow players to start socially-distanced training in an effort to relaunch the campaign in the middle of June.

Contact training is not permitted and corner flags, balls, cones, goalposts, playing surfaces and other equipment will be disinfected after each session, said the Premier League.

“Strict medical protocols of the highest standard will ensure everyone returns to training in the safest environment possible," a Premier League statement said.

"The health and well-being of all participants is the Premier League's priority, and the safe return to training is a step-by-step process.

"Full consultation will now continue with players, managers, clubs, the Professional Footballers' Association and the League Managers Association as protocols for full-contact training are developed.”

Liverpool poised
When the action in England was suspended, Liverpool were 25 points clear of second-placed Manchester City and poised to hoist their first top flight title in 30 years.

The real intrigue lay around which teams would claim slots for next season's Uefa Champions League as well as the battle to avoid the drop into the second tier.

“I'm sure everyone will be delighted that we're trying to make that effort,” said Newcastle United manager Steve Bruce.

"Everything is in place in the safety aspect. I've got no issues. The players and the staff are as safe as we possibly can be.”

Organisers of Portugal's Primeira Liga gave the all-clear for a restart on 4 June and there are hopes in Italy for a resumption in the middle of the month.

Campaigns in the Netherlands, Belgium and France were all ended due to the coronavirus pandemic.

In France, the Ligue de Football Professionel (LFP) awarded Paris Saint-Germain the Ligue 1 title and promoted Lens and Lorient from Ligue 2 while relegating Amiens and Toulouse from Ligue 1. Amiens have started legal action against the LFP's move.

In Spain, 12 June has been anointed as the day to start playing the 11 remaining games of the season.

"We are working to be ready regardless of the date," Tebas told Movistar TV. "It is the health authorities who will say when we start."

The German Bundesliga resumed on Saturday. Pacesetters Bayern Munich restored their four point lead over Borussia Dortmund after a 2-0 win at FC Union Berlin on Sunday

Dortmund have eight games remaining to stop Bayern from winning their seventh consecutive Bundesliga crown and a record-extending 29th overall.