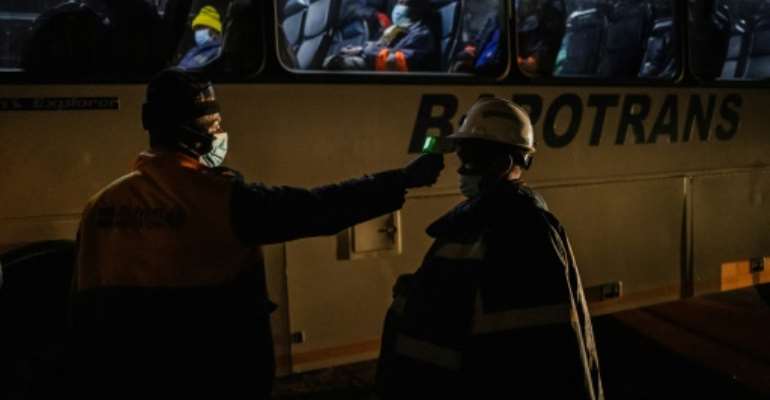 Each shift at the Sibanye-Stillwater platinum mine in South Africa now begins with a temperature check, part of screening measures to stem the spread of the novel coronavirus. By Michele Spatari (AFP)

On a chilly South African evening at the mining town of Marikana, men filed into a bus and sat one per row, ready to start their night shift at a nearby platinum mine.

Before boarding, a security guard scanned their foreheads and necks with a thermometer and showed each worker his temperature reading.

Hands were then duly sanitised and another round of checks occur at the mine shaft.

The rigorous ritual is repeated before every shift -- a new normal for South Africa's mines as the key industry slowly resumes operations under loosened anti-coronavirus restrictions.

South Africa boasts some of the world's richest deposits of precious minerals and base metals.

Mines are also one of the largest employers, with nearly half million workers.

Mining is a key industry in South Africa as it is the major foreign exchange earner and a top employer. By Michele Spatari (AFP)

But operations were suspended when Africa's most industrialised economy went into lockdown on March 27, as crowded underground tunnels risked becoming breeding grounds for the novel coronavirus.

Mines were allowed to partially resume operations under "strict health conditions" on May 1.

Many already had protocols to limit disease due to a history of infections such as tuberculosis.

But coronavirus has forced mines to add extra protective measures, including surgical masks rather than ordinary dust masks, chemical sanitisation and social distancing.

"We see the mines as high risk in terms of transmission of this virus," said Limpopo provincial health minister Phophi Ramathuba.

Miners usually work in close quarters, so work practices are having to adapt. By Michele Spatari (AFP)

"It's not easy to practice (social distancing) underground," Ramathuba said after Marula platinum mine reported 19 coronavirus cases over the weekend.

By Monday, 1,450 miners nationally had been tested and 41 were positive for COVID-19, although none were contaminated in the mines, according to the Minerals Council association.

At least 168,500 miners have already been screened for symptoms at work.

The South African government has drafted comprehensive anti-coronavirus regulations for the sector to allow them to resume operations at 50 percent capacity, including screening and testing.

"The industry's focus is to prevent (outbreaks) as far as possible," the Minerals Council's health chief Thuthula Balfour told AFP.

Miners with underlying chronic illnesses such as diabetes, cancer and AIDS are not allowed back to work until the virus has abated.

Migrant workers returning from virus hotspots around the country will also have to be quarantined.

But government wants operators to do more.

Miners also live in close quarters in many settlements, such as the Wonderkop settlement in Marikana. By Michele Spatari (AFP)

The industry has been "very efficient up to screening", said Mineral Resources Minister Gwede Mantashe, but they have to "intensify testing," Mantashe said on Sunday, warning that he would shutter any mine that let infected workers underground.

Meanwhile, mines have been struggling to recover the losses incurred from more than a month of stalled operations.

"We are not making money at 50 percent," said James Wellsted, spokesman for Sibanye-Stillwater, the world's largest platinum producer.

Unions are worried about job losses.

Joseph Mathunjwa, leader of the Association of Mineworkers and Construction Union (AMCU), the largest mining union, warned that this is "an opportunity to restructure and use COVID-19 as an excuse to retrench workers."

Workers in Marikana are also worried about the possibility of losing their job.

The town grabbed headlines in 2012 when police gunned down 34 miners during a wildcat strike in scenes reminiscent of apartheid brutality.

"People are scared and angry, it's not easy to lose a job," said a Samaco chrome miner, who asked not be named for fear of retribution from employers.

People walk in the Wonderkop settlement in Marikana, near Rustenburg, on May 15, 2020, with the Sibanye-Stillwater platinum mine in the background.The mines are a critical cog in South Africa's already struggling economy, contributing eight percent to the GDP of Africa's most industrialised economy. They are also one of South Africa's largest employers, with nearly half million workers. But confined underground working conditions risk becoming breeding grounds for the COVID-19 coronavirus. The South African government has drafted comprehensive anti-coronavirus regulations for the sector and these include mandatory extensive screening and testing.. By Michele Spatari (AFP)

The 26-year-old was more concerned about loosing his job than catching coronavirus.

"Things are bad, its worse than before," said Primrose Sonti, a Marikana community leader and a lawmaker for the radical leftist opposition Economic Freedom Fighters.

"Here in Marikana people are hungry, people are angry," she said, adding some are so poor they can't even afford face masks or food.

Water is also a problem in some areas, making it difficult to respect hygene measures to prevent the spread of the coronavirus.

"How are we going to wash hands without water," she said.