Stigmatisation Against Patients With COVID-19 Dangerous 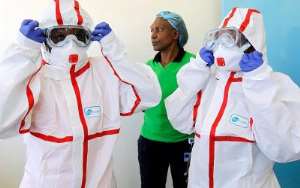 COVID-19, the talk of the world, first reared its ugly head in the latter part of 2019 in Wuhan, China as an outbreak and began to spread to many parts of the world with a speed of light compelling the World Health Organisation to declare it as a pandemic.

This virus has brought in its wake several thousands of deaths and has infested several millions. In fact, the virus has spread to almost all the countries around the globe not sparing those with well-equipped health facilities.

Since the beginning of this year, 2020, nations across the world have put in place stringent measures to curb the rapid spread of the virus among their citizens.

Some of these unavoidable measures include the closure of borders, the passage of laws to enforce the wearing of nose mask and the strict compliance with physical distancing.

To further control the spread of the virus, countries have imposed restrictions on movement leading to lockdown and self-quarantine.

In Ghana, health workers and others including security personnel who have been identified as frontline workers in the fight against the deadly virus, put their dear lives on the line to ensure the treatment and control of the spread of the virus.

The great sacrifices by these patriotic citizens deserve absolute and unqualified commendations from all and all we can say is a big Ayekoo to them for their immeasurable contributions and selfless service to the nation.

In spite of the efforts by government and the health workers in dealing with this pandemic, there is an emerging concern which has to do with the issue of social stigmatisation.

Notwithstanding the ravaging nature of the virus, the sad reality is that social stigma has become a major bane facing us as a people and posting great danger to our efforts at combating the virus.

It is instructive to mention that in their quest to treat persons with the virus and safe lives, some health workers in Ghana have been infested with the virus whereas some seasoned doctors have lost their lives in the process.

It is therefore disheartening when society shamefully and callously stigmatise against individuals who are perceived to have the virus as well as those who have been confirmed to have it.

As if it is not enough, the stigma is often extended to those who have fully recovered, their families and worst of it all, the frontline health workers who put their lives on the line to safe these patients.

Currently, the situation in Ghana is becoming a challenge and a conscious effort would have to be made to deal with this emerging social challenge of Stigmatisation. This stigmatisation is due to lack of knowledge, fear and uncertainties of this new virus.

Just recently, a health worker who had recovered from Covid 19 had to remain anonymous when being interviewed by the media and this became necessarily simple because of the social stigmatisation that this health worker would have faced in the community or even the place of work.

This negative attitude of the Ghanaian society, if not nipped in the bud, would further aggravate the already threatening situation that keeps moving from bad to worse.

One would ordinarily expect that such a person in that status would be celebrated to come out to educate the public and alay any fears or misconceptions about the virus. However, the quest to do so is likely to be met with social stigmatisation.

It is important to note that social stigmatisation could be more dangerous than the virus if not tackled promptly and effectively.

For instance, persons who may show symptoms of covid 19 may be reluctant to test to know their status for the fear of stigmatisation when tested positive.

This person will likely continue with their normal interruption with the general community, which might lead to the continue more spread of the virus unknowingly.

However, if this individual had tested on time without any fear of stigmatisation, the rate at which the virus would have spread would be minimised.

Also, when a suspected person awaiting test result is asked to self-quarantine, that person is likely to ignore such a directive and in some cases, may mingle with society because he or she would not want the neighbours to discover for fear of stigmatisation.

It is very important to stress that our quest to fight the deadly virus would be in absolute vain when people begin to hide their status as this would lead to rapid communal spread.

This is because social stigmatisation could cause feelings of shame, hopelessness, isolation and discourage infected patients from seeking immediate treatment leading to severe complications in vulnerable people or possible death.

What good would we have done as a people should an innocent person who has recovered from covid 19 dies because of stigmatisation or is not able to go back to her or his normal life?

In other parts of the world like the United Kingdom, persons who have recovered from the virus are applauded when they are returning home from the hospital.

This is to express oneness, support and love to the person for the fact that he/she did not die but has recovered from the disease and has joined the society.

Covid 19 currently does not have a vaccine; however, as reiterated by experts, it is a virus which can be managed and treated. There are a lot of people who have been treated and have recovered from the disease.

When we are able to deal with the issue of stigmatisation, we will be a step ahead in tackling the virus.

As an advocate and a person with visual impairment, I have been a victim of social stigmatisation and discrimination and I would like to use this medium to urge all people to put an end to stigmatisation of persons who have been infected with the virus and those who have recovered from the disease. Indeed, Social Stigmatisation has psychological and emotional effect on the victim and can cause depression which may lead to the slow death of a person.

Patients with Covid 19 at this moment need our total support and love.

The media has done tremendously well so far by playing it effective role of educating the masses as far as the fight against covid 19 is concerned and is encouraged to do more.

Stigmatisation against persons living with the virus or those who have recovered from it, has its own repercussions and negative tendencies that militate against our quest to subdue the existential threat post by the deadly virus.

Let us all be mindful of the emotional and psychological consequences associated with stigmatisation in this era of the pandemic especially where persons living with the virus as well as those who have recovered are already traumatised.

The least we can do is to offer them our total support and love by embracing them back into the society and recognising their dignity as human beings.

In doing so, people can willingly and freely come out for proper isolation and treatment. This will obviously augment our efforts at fighting the virus.

Going forward, when the level of stigmatisation becomes unbearable, it is suggested that government should introduce policies or pass laws through parliament to criminalise social stigmatisation against patients with covid 19.

We all have a role to play. We shall overcome and it will be history. Long live Ghana, long live Africa, long live the world.

30,000 Disqualified From Voting On December 7
43 minutes ago