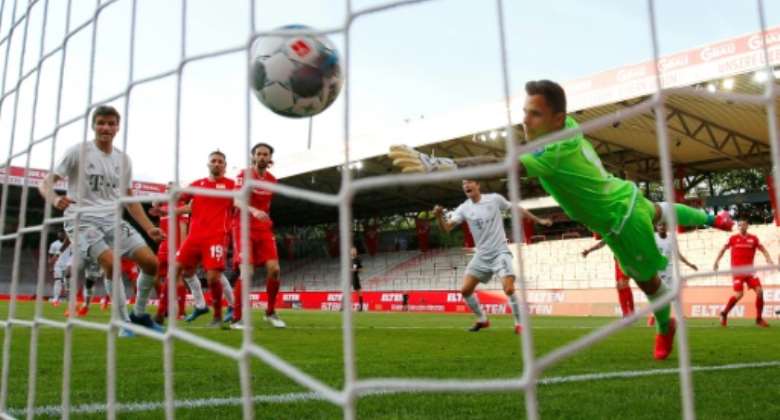 Bayern Munich's French defender Benjamin Pavard (hidden) scores their second goal against FC Union Berlin during the first weekend of Bundesliga play after a two-month absence due to the novel coronavirus pandemic. By HANNIBAL HANSCHKE (POOL/AFP)

The world's biggest economy faces a severe downtown but will not suffer another Great Depression, US Fed chief Jerome Powell said on Sunday, as three hardest-hit countries in Europe reported low death tolls and lockdowns eased.

Italy recorded the fewest deaths from coronavirus, 145, in one day since its two-month lockdown began, while Spain had 87 new virus-related deaths -- the first time the number has fallen below 100 in two months.

Restaurants, bars and cafes will be among the businesses allowed to reopen from Monday in Italy, and Spain will also further relax its lockdown measures, except in Madrid and Barcelona.

Britain also registered its lowest daily increase since late March, with 170 fatalities. However, that number did not include Northern Ireland due to a technical issue -- and these figures are often lower on weekends due to lags in reporting.

With a worldwide virus death toll above 315,000 and the global economy reeling from the vast damage caused by stay-at-home orders, numerous European countries are lifting restrictions to provide much-needed respite for their beleaguered and impatient populations

In the United States, too, with more than 30 million jobs destroyed, states have begun reopening even though federal guidelines for a two-week decline in cases have not always been met.

The US economy could "easily" collapse by 20 to 30 percent this quarter, and unemployment could peak at 20 to 25 percent, but, "it should be a much shorter downturn than you would associate with the 1930s," Powell, the Federal Reserve Chairman, said on CBS's "60 Minutes."

On Sunday, the United States also recorded its lowest daily death toll in a week, at 820, but the country with the world's highest number of coronavirus fatalities neared 90,000 dead.

A Bayern Munich substitute player wearing a protective face mask maintains social distance in the stands during a match against FC Union Berlin played without fans. By HANNIBAL HANSCHKE (POOL/AFP)

Elsewhere, the virus -- which has infected 4.7 million people globally -- is still surging.

Brazil's number of deaths soared past 16,000 with more than 240,000 infections, making it the country with the fourth-highest number of cases.

On the other side of the Atlantic, South Africa reported 1,160 new infections, the highest daily number since March when the country recorded its first case.

A semblance of normality returned to the sports world on the weekend, in the United States, Europe and Asia.

A NASCAR motor race before empty stands at the Darlington Raceway in South Carolina was the sport's first live competition since March 8.

Germany's Bundesliga at the weekend became the first top football league to return after lockdown, bringing relief not only to European football fans but to a sports-starved world. Defending champions Bayern Munich defeated Union Berlin 2-0 inside an empty stadium in the capital on Sunday evening.

An empty road in Chile's capital Santiago, which has entered lockdown after a surge in new cases. By MARTIN BERNETTI (AFP)

Despite the optimism in some European countries, rising infection and fatality numbers in other parts of the world offered grim reminders of the threat COVID-19 poses.

The number of cases in Latin America passed half a million as Chile locked down its capital Santiago following a sharp rise in infections.

Despite Brazil's surging numbers, President Jair Bolsonaro is keen to end lockdowns, which he claims have unnecessarily damaged the economy.

He told a protest in Brasilia on Sunday that social distancing and other health restrictions were too much.

Alongside several of his ministers, he greeted hundreds of supporters who crowded outside the Presidential Palace with Brazilian flags, bugles and loudspeakers.

They also held signs calling for the use of hydroxychloroquine to treat the new coronavirus, even though several studies appear to have doused hope the drug can help.

The government of tiny El Salvador, in Central America, extended for another month its own lockdown aimed at countering COVID-19.

India reported its biggest single-day jump in infections, prompting an extension of a nationwide lockdown for its 1.3 billion people until the end of May.

Children make their way to school in Wellington, New Zealand, after the government allowed schools to re-open under its guidelines. By Marty MELVILLE (AFP)

Russia, which has the world's second-highest number of infections, claimed Sunday that steadying case rates showed the growth of the virus had been halted, after reporting its deadliest day yet on Saturday.

In Algeria, the COVID-19 death of an eight-month pregnant doctor sparked an uproar after her request for early maternity leave was rejected.

A world map showing official number of coronavirus deaths per country, as of May 17, 2020 at 1100 GMT. By Simon MALFATTO (AFP)

Madagascar and Nepal reported their first coronavirus-linked deaths, while Qatar began enforcing the world's toughest penalties of up to three years' prison for failing to wear a mask in public. The Gulf emirate has one of the world's highest infection rates.

With the threat of a second wave of infections, authorities in many countries have asked people not to throng public spaces as they are made accessible again.

In China, where the virus emerged late last year but has largely been brought under control, the government's senior medical advisor warned of just such a second wave due to a lack of widespread immunity.

But with people growing weary of confinement and suffering immense economic pain, governments face growing pressure to ease lockdowns. US President Donald Trump has been keen to get his country's economy going again.

A top Trump economic advisor, Peter Navarro, took a swipe Sunday at the long-respected Centers for Disease Control and Prevention, saying that by initially providing a flawed test for COVID-19, the federal agency "let the country down."

New York, long a virus hotspot, has seen steady improvement, and Governor Andrew Cuomo on Sunday took a virus test on live television in a bid to encourage more widespread testing and pave the way for a safer reopening of the populous state.