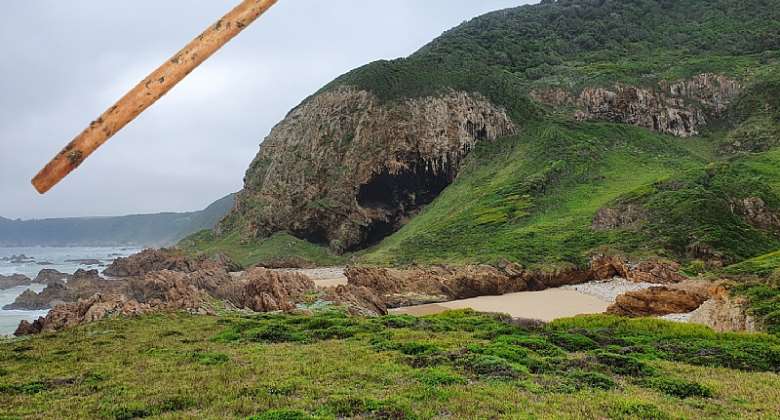 The bone arrowhead (insert) found at Klasies River main site has much to teach us. - Source: Justin Bradfield and Sarah Wurz

The origin of bow hunting has been a hotly debated topic in archaeology for the past two decades. This is because knowing when it emerged has the potential to offer insights into the development of human cognition and the early development of complex technology.

Bone arrowheads were used throughout most of the world for the last few thousand years. But the examples found in South Africa predate anything from other regions by at least 20 000 years. Currently, the earliest evidence of bow hunting technology outside Africa comes from southern Europe , and dates to around 45 000 years ago. The earliest non-African evidence of bone points used as arrow tips is at 35 000 years ago from Timor Island .

Because bows and arrows were made predominantly from organic materials, very little evidence of these weapons survives archaeologically. Nevertheless, at several sites in South Africa small stone segments have been found from 60 000-year-old horizons that are thought to have once formed part of arrowheads, either as tips or barbs.

Bow and arrow technology gives hunters a unique advantage over their prey. It allows them to hunt from a distance, and from a concealed position. This, in turn, increases individual hunters' success, as well as providing an aspect of safety when stalking dangerous prey such as buffalo, bushpig, or carnivores.

The bow and arrow consists of multiple parts, each with a particular function and operating together to make hunting possible. This kind of “symbiotic” technology requires a high degree of cognitive flexibility : the mental ability to switch between thinking about different concepts, and to think about multiple concepts simultaneously.

Until now, evidence for bow hunting technology using bone and dating back more than 60 000 years has only been reported from South Africa's KwaZulu-Natal region. Now an in-depth examination of a bone arrowhead found in South Africa's Eastern Cape province extends the known distribution of this technology farther south – and slightly earlier than previously thought.

Our study, published in Quaternary Science Reviews , focused on a long, thin, delicately made, pointed bone artefact. It was found at the Klasies River Main site, along the Eastern Cape coast of South Africa.

This is an extremely important archaeological site. It has the most prolific assemblage of H. sapiens remains in sub-Saharan Africa, spanning the last 120 000 years. Its archaeology sparked the first discussions raising the probability that complex human behaviour and cognition were represented in sub-Saharan Africa long before appearing in Eurasia.

The artefact we studied, which comes from deposits dated to more than 60 000 years ago, closely resembles thousands of bone arrowheads used by the indigenous San hunter-gatherers from the 18th to the 20th centuries. It was excavated in the 1960s, but its importance was not recognised until recently, owing to confusion surrounding its age.

Our study followed a combined approach, incorporating microscopic analysis of the bone surface, high-resolution computed tomography (CT), and non-destructive chemical analysis. The study found trace amounts of a black, organic residue distributed over the surface of the bone point in a manner suggestive of 20th century poisoned arrows. The chemistry of the black substance indicates it consists of many ingredients. Again, this is suggestive of known San poison and glue recipes.

We still do not know exactly what organic compounds went into the recipe for the black substance, but future chemistry work will address this question.

Microscopic analysis of the bone artefact indicates that it was hafted (or attached) to another arrow section – probably into a reed shaft. This was done after the black residue was applied. The micro-CT scan allowed us to look inside the bone, to see structural damage at a microscopic scale. These results showed that the bone artefact had experienced the same mechanical stresses as high-velocity projectiles, like arrows.

The study demonstrates that the pointed bone artefact from Klasies River was certainly hafted, maybe dipped in poison, and used in a manner similar to identical bone points from more recent contexts.

The artefact also fits in with what we know of ancient people's cognition and abilities in southern Africa.

From at least 100 000 years ago people in southern Africa were combining multiple ingredients to form coloured pastes, possibly for decoration or skin protection . By 70 000 years ago they were making glues and other compound adhesives using a range of ingredients, combined in a series of complex steps. These glues may have then been used, among other things, to haft small stone pieces in varying arrangements, probably as insets for arrows or other weapons.

The presence of these technical elements in the southern African Middle Stone Age (roughly equivalent to the Eurasian Middle Palaeolithic) signals an advanced cognitive ability. That includes notions of abstract thought, analogical reasoning, multitasking and cognitive fluidity or the ability to 'think outside the box'.

Sarah Wurz receives funding from the Centre of Excellence in Palaeoscience, University of the Witwatersrand

By Justin Bradfield, Senior lecturer, University of Johannesburg And

Jerome Reynard, Lecturer in Osteoarchaeology, University of the Witwatersrand And