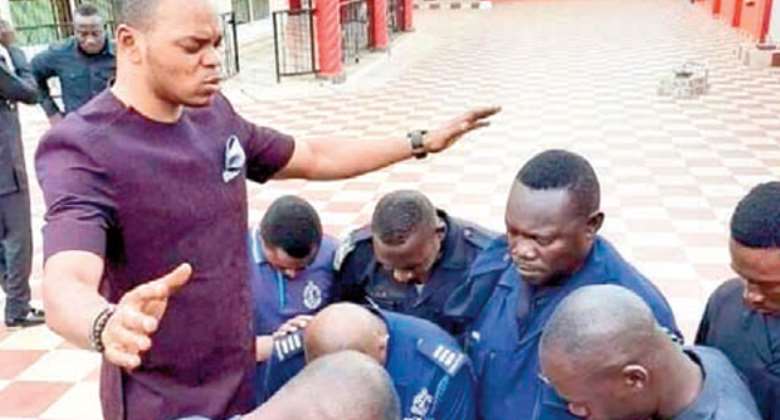 There is confusion over whether or not controversial pastor Bishop Daniel Obinim of the International God’s Way Church has been picked up by the Ghana Police Service.

The Police Administration has vehemently denied that the pastor, who claims to be an angel and has been frequenting heaven, is in their custody.

Criminal Investigations Department (CID) sources told DAILY GUIDE that Obinim had not been arrested and another checks at the Greater Accra Regional Command also said the pastor was not in its custody.

Checks at the Police Hospital where Obinim is said to have been taken after 'falling' sick had also proved to be false.

The rumours about Obinim's arrest started on Thursday night when social media was replete with news about the incident.

The MP for Assin Central, Kennedy Agyapong, who has vowed to bring down all 'Men of God' he deems fake, and Obinim who he says is one of them, has been on the radar of the MP.

The MP confirmed on his NET2 TV that he has reported Obinim to the Inspector General of Police for fraud, money laundering and using police logo to threaten some of his (Obinim) followers who had bad deals with the pastor.

He said a warrant had been issued to get Obinim arrested but when the police tracked him down, the pastor feigned sickness and had since been hiding at a private health facility in Accra.

He said Obinim claimed to have blood pressure and was hiding at the second floor of the hospital located at East Legon, Accra.