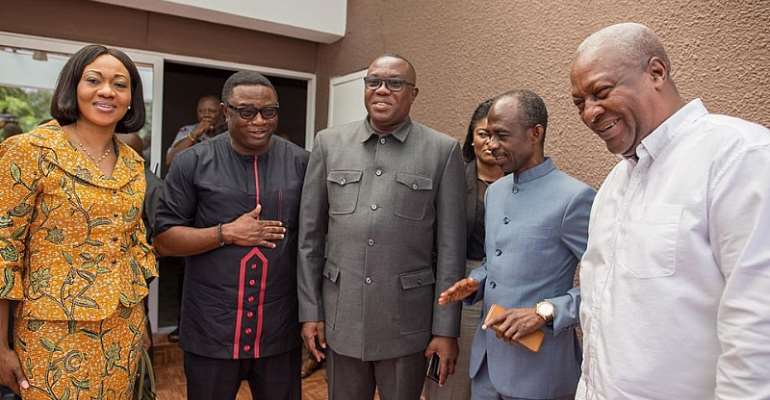 The Electoral Commission says rigging elections in Ghana is impossible.

At a press conference on Thursday, the biggest opposition party raised fears that the decision of the Electoral Commission to compile a new register of voters using passports and the National Identification Authority’s Ghana card as proof of eligibility may give undue advantage to the governing New Patriotic Party and President Nana Akufo-Addo and also help the incumbent to rig the upcoming presidential and parliamentary elections in December 2020.

The NDC said more than 10 million Ghanaians are unable to retrieve their Ghana cards from the NIA several months after they were registered, a situation which the Chairman of the party, Mr Samuel Ofosu-Ampofo, said will make it impossible for them to be captured on the new electoral roll.

“The President, seeing defeat staring glaringly at him, is, in conjunction with the Jean Mensa-led EC, and the Ken Attafuah-led NIA, desperately scheming to rig the 2020 elections and hold on to power at all cost”.

“Not even the unusual circumstances we find ourselves in which require that we pull together for our collective survival as a nation, are enough to deter the actors of this plot from their ungodly act”, Mr Ampofo alleged at a press conference on Thursday, 14 May 2020.

“In essence”, he noted, “you’d realise that at the end of the day, several people will be frustrated, they’ll not get the opportunity. And if you look at the figures, you’d realise that the percentages increase in the NDC strongholds and it is a very worrying sign that it is a deliberate attempt to suppress votes and ensure that as many people as possible are unable to make themselves available”.

In Mr Ampofo’s view, allowing the EC to compile a new register within the time constraints brought by the COVID-19 pandemic, could mean disaster.

“Again, considering the time limitation imposed on the nation by COVID-19, this is not only practicable but simply defies commonsense and will surely disenfranchise a lot of eligible voters if the EC is allowed to proceed on this rather dangerous and perilous path”.

The EC, in its response, said: “It is impossible for the Commission to conspire with any political party or institution as being speculated by Mr Ofosu-Ampofo and the NDC since the electoral processes remain transparent at all levels”.

“As an independent body, the Electoral Commission is mandated to conduct free, fair and transparent elections within the confines of the law and will continue to perform its functions as such without fear or favour,” the Commission said.

Meanwhile, the NIA has also denied the allegation, saying: “There is no truth to this allegation. NIA does not operate on the basis of political strongholds. Our operations planning is based on population statistics obtained from Ghana Statistical Service. There has been no deliberate effort to prevent applicants in any region to register”.

It added: “While it is true the exclusion of the voter ID card as a primary registration requirement has increased the number of applicants needing to be vouched for, this process has been a part of our electoral practice under the Fourth Republic. The only difference now is that requirement that the oath be sworn before a Commissioner for Oaths or Magistrate. This ensures greater document integrity as guarantors appreciate the consequences of perjury in swearing the oath of identity. NIA ensures that a Commissioner of Oaths is available at every registration centre, at no cost to the applicants. Indeed, over 70% of applicants for the Ghana Card used this method to validate their citizenship nationwide”.