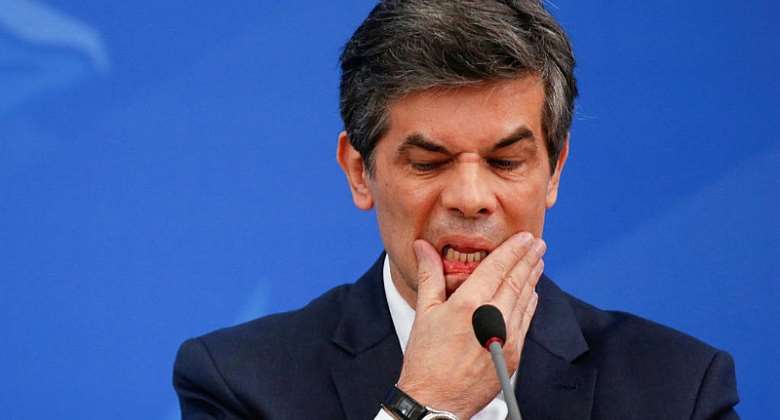 Brazil's health minister, Nelson Teich, has quit Jair Bolsonaro's government less than a month after his predecessor was fired for rowing with the president over the country's response to the coronavirus pandemic.

Teich, 62, resigned on Friday over what a health ministry official said was incompatibility with Bolsonaro's approach to stemming the death toll in the country which has reached nearly 14,000.

It is understood there were also clashes over Bolsonaro championing the use of chloroquine to treat the coronavirus despite studies casting doubt on its effectiveness and safety.

An oncologist by training, Teich was drafted in as health minister after Luiz Henrique Mandetta left on 16 April.

He had argued with Bolsonaro's insistence on playing down the dangers of the virus and criticism of provincial governor's attempts to keep residents at home.

Lula raises concerns
Teich's departure came hours after the former president, Luiz Inacio Lula da Silva, said he feared a genocide in the country because of Bolsonaro's attitude towards the coronavirus and his desire to keep Brazilians in the workplace.

"The administration is turning anyone who's worried about coronavirus into an enemy, and that's not the right path,” Lula said in an interview on Friday with the news agency AFP.

“I'm Catholic, so I've been praying for the Brazilian people to escape this genocide Bolsonaro is causing."

Lula, a former union leader who fought Brazil's 21-year military dictatorship, served as president between 2003 to 2010.

After his term, he was was jailed on corruption charges. He says they were trumped up to keep him from the presidential race which Bolsonaro won in October 2018.

Presidential actions
The 74-year-old emerged from prison last November and has maintained his political profile. He said he had changed his mind as to whether Bolsonaro should be impeached.

"I said before that we shouldn't try to impeach a president who had just been elected. The person has to have committed high crimes.

“Now, in my opinion, Bolsonaro has done that. He has attacked democracy, democratic institutions and the Brazilian people. He doesn't even respect those who are dying of Covid-19.

“But I think the movement for impeachment should come from somewhere other than a political party, to avoid any ideological connotation."

The news of Teich's resignation drew anti-Bolsonaro protests. In Rio de Janeiro, residents banged pots and pans out their windows, shouting "Get out, Bolsonaro!"

And it will increase the pressure on the leader. On 24 April, the justice minister Sergio Moro left after Bolsonaro fired Maurício Valeixo, the head of the federal police. In his final press conference, Moro accused Bolsonaro of political interference.