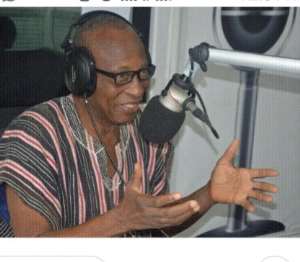 The Bono Regional Criminal Investigation Department of the Ghana Police Service today visited the residence of the ringleader in the June 4th uprising, Major Rtd Osahene Kojo Boakye Gyan at Babianiha in the Jaman South Municipality.

The visit was to arrest or pick him for comments made on a radio station that if the EC wants a civil war they'll get it.

In an interview with Jaman Radio morning show host Alhassan Bin Jibril Spelele, the former soldier said he told the security men that he's not fit to go to Accra and for that matter if they can provide an ambulance he'll go with them.

Osahene declined to give details of whatever went discussed but said he's not fit to go to Accra and that the officers had since left.

Osahene Boakye Gyan claimed the EC, having a desire to rig the 2020 elections with the tacit assistance of the ruling NPP, is hell-bent on having a new register.

He said "the NPP won power with the biggest electoral margin; so what has gone wrong? He questioned.

He, however, indicated that his civil war comment was made because he overheard an NPP activist on Jaman Monday morning claiming if elections are held today, Nana Addo will be re-elected with some one million, three hundred thousand votes difference and that generated the issues. In his understanding he thinks the NPP has cooked up the figures already and are simply looking for the means to legitimize their rigging by undertaking a registration exercise (through the EC)....," he alleged.