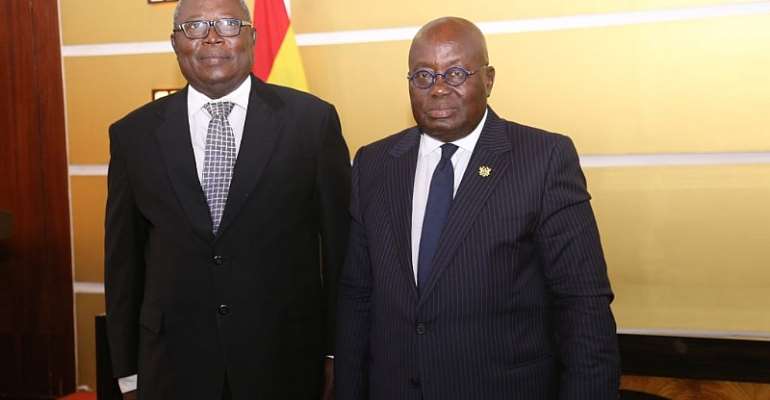 The Supreme Court recently decided by a 5-2 majority that the 66 years old Martin Amidu was qualified to be nominated and appointed to the office of the Special Prosecutor even though the mandatory retiring age from the public service is 60. It is good that this matter, albeit delayed, has ended. In a constitutional democracy, the Court has the last word and it has spoken.

While other views are just that, they must nevertheless be aired for accountability purposes. All good judges crave for and accept honest, constructive feedback on a regular basis because they are acutely aware that their skills will atrophy, absent such feedback.

I would have voted with the minority on grounds that Parliament has no authority to create a public service position that subverts the retirement age scheme stipulated by the Constitution.

The Constitution creates two kinds of public officers, one who can be dismissed only for cause and the other at will. See chart below.

“At will” public officers are normally elected or serve at the pleasure of elected officials. They can be dismissed at will either by electors or their appointors. Because their tenure is hazardous at best, the Constitution specifies no mandatory age. “For cause” public officers are normally career officers and can only be dismissed for a good cause. Because their tenure is guaranteed while they act properly, the Constitution sets a mandatory retirement age. Here, the Constitution itself provides that a few in this category must retire at 70, others at 65, and all others at 60.

This means unless otherwise included in the 70 or 65 bucket, a for cause public officer must retire at 60. This is what Article 199(1) means when it provides that “A public officer shall, except as otherwise provided in this Constitution, retire from the public service on attaining the age of sixty years.” It is such a clear command that it is not capable of any other interpretation. This is why the SC, in the Appiah-Ofori, case rejected the argument that the Auditor General being appointed under Article 70 should retire at 70.

The Special Prosecutor is a for cause public service position. It is neither elected nor does the occupier serve at the pleasure of the appointors. Plainly, it is just a specialized prosecution position. In my opinion, just because the Constitution itself allows some for cause public officers to retire at 65 and 70, does not mean Parliament too can create positions that set the retirement age beyond 60 or otherwise effectively upset the constitutional retirement scheme.

Otherwise, we are in a regime where all parliament needs to do is to create a Special Professor or Special Auditor-General position and stipulate that they serve for a 10-year term, which then allows them to be appointed after mandatory retirement for 10 more years.

The Constitution was Amended in 1996 to add Article 199(4), which provides that “Notwithstanding clause (1) of this article, a public officer who has retired from the public service after, attaining the age of sixty years may, where the exigencies of the service require be engaged for a limited period of not more than two years at a time but not exceeding five years in all upon such other terms and conditions as the appointing authority shall determine. However, it has not been suggested that the Special Prosecutor has been appointed under this Limited Period contract. Nor has anyone identified the exigencies that will warrant the triggering of this clause.

It is logically unpleasant for a Director of Public Prosecutions (DPP) to be retired mandatorily at 60 only to be appointed to another public service prosecutorial position for a fixed term. Whether one is in charge of prosecuting corruption or prosecuting armed robbers should not determine one’s retirement age. At least, that facially absurd regime is not in the Constitution.

Where the Constitution has provided an explicit scheme to govern the retirement of public service officials, Parliament cannot create public service positions that in effect have no retirement age. Nor should, in my opinion, the Supreme Court under the guise of a “purposive” approach sanction such a parliamentary adventure.

Likewise, while the Constitution sets a minimum age of 40 for the President and 21 for an MP, that does not mean Parliament too can start setting its own minimum age limits on other public service positions. In our polity, it is the Constitution, not Parliament, that is supreme. We must therefore be careful not to apply doctrines that we inherited during our colonial history.

The Court’s reasoning that the SP office is critical, which therefore empowers Parliament to traverse Article 199(1) is flawed and at variance with the Court’s holding in the Appiah-Ofori case. In Appiah-Ofori, the Plaintiff canvassed similar arguments about the Auditor-General being an Article 70 appointee, whose functions are critical, and should therefore retire at 70 in pari materia with Court of Appeal judges. Referring to the clear wording of Article 199(1), the Court rejected the argument. As the Constitution did not stipulate a specific mandatory retirement age for the Auditor-General, it followed that he or she must retire at 60.

The Court’s COVID example, wherein an emergency can provide a constitutional basis for changes in the retirement age, undermines constitutional theory. A constitutional amendment, not a misguided application of purposive interpretation, is required if it becomes obvious that health workers, for instance, should be allowed to work beyond the mandatory retirement age.

It is both wrong and a distortion of the record for the Court to have relied on Parliament’s residual power under Article 298 or any other Article. Wrong, because Article 199 exhausts the retirement age issue. The residual power cannot be triggered where there is an express constitutional voice on a matter. A distortion, because Parliament itself declared that it was relying on its powers under Article 190(1)(d), which also resolves the issue of whether the office is part the Public Service. It is!

The Court’s holding that there was no clear prohibition, inference or language in the constitution that barred Parliament from crossing the 60 years retirement age when fixing the tenure of office for certain critical office holders is fanciful. Article 199(1) is a very clear prohibition. Other than the exceptions provided by the Constitution itself, no law and no Court is permitted to set a retirement age for public officers in the public service. Article 199(1) does not distinguish among professional, technical, bureaucratic, or administrative personnel in the public service as the Court declares.

The Court’s extensive treatise on purposive interpretation and resort to Tuffuor added no value and the Court woefully failed to apply the principles therein. It is becoming a worrying trend that whenever the Court decides to ignore the Constitution, it does so by offering an inconsequential treatise on these interpretive aids. Neither a purposive approach nor Tuffuor stand for the proposition that the clear words of the Constitution must be ignored. Nor do they stand for distorting the record on what Parliament itself has relied on. In this case, both the 1979 and 1992 “Committees of Experts” were ad idem on constitutionalizing the retirement age for public officers to take it from the realm of politics. They were firm that the mandatory retirement age is 60 and in rare cases can be extended for a period not to exceed five years, leading to a ceiling of 65.

The Court’s extended discussion of why there is not a single retirement age for all public officers was entirely gratuitous because it was never an issue. Moreover, the Court failed to offer a framework, similar to the one here, that ties together these disparate ages. The Plaintiff acknowledged that and the figure above explains why.

The framers have painstakingly and meticulously provided a retirement age architecture that the Court has undone in a rather cavalier way by ignoring its own precedents and distorting the parliamentary record on the OSP legislation.

Article 199(1) is entirely meaningless if any transient parliament can create public service positions for which it does not apply. Except as provided in this Constitution means just that!!

Thus, it was entirely per incuriam for the Court to hold that Parliament has the flexibility and authority in appropriate cases to prescribe a retirement age different from the article 199 age as the exigencies of the job will require. I do, of course, have concerns with the mandatory age of 60 and have indicated the need to amend the Constitution to increase it to 70 while allowing people to voluntarily retire at 60.

A final noteworthy point is that the Supreme Court took more than 2 years to determine this case. This is not good enough. A question about the qualifications of a person to hold a certain office must be resolved immediately. Ideally, it must be resolved before the person ascends to that office. A delay in answering such a question is not just unjust, it also puts the Court in a precarious position where saying the appointee is disqualified raises questions about the Court’s wisdom in allowing an unqualified person to hold the position for 2+ years in violation of the Constitution. Unconsciously, such delays may then bias the Court toward a finding of constitutionality to avoid the dissonance of declaring unconstitutionality after allowing the unconstitutionality to persist for 2+ years.

Alas, this is not the first time that such an unacceptable delay has occurred. In fact, such delays, in time-sensitive constitutional cases, have become the norm. The Court should figure out a way to address this problem as it is causing the public to lose confidence in and respect for these delayed opinions. Many of these constitutional cases are about legal arguments and do not involve testimony from witnesses. They can be resolved much quicker than the current practices allow. The Court must do more to enhance judicial efficiency.