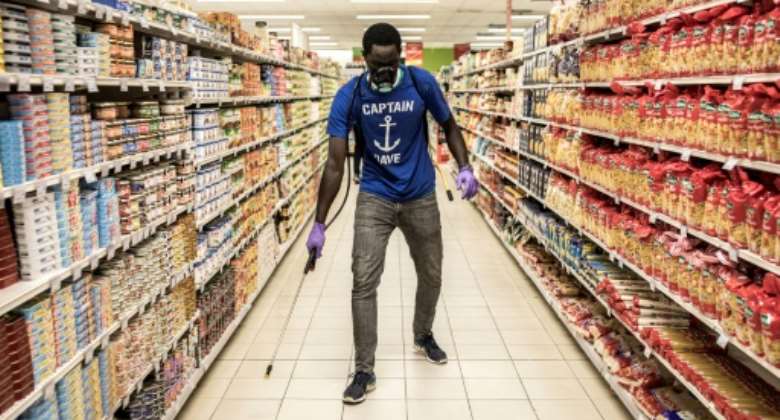 A man disinfects an empty supermarket in Dakar. By JOHN WESSELS (AFP)

Seydou Sall sprays antiseptic on bags of food freshly deposited by an e-commerce firm at his home in an upmarket quarter of Senegal's capital Dakar.

In a pattern repeated across the continent, the researcher has turned to online deliveries to get basics such as sugar, milk and coffee during the coronavirus pandemic.

"Home delivery allows me to avoid contact and queues," he said, explaining that his order is completed in three clicks and that delivery costs just 2,000 CFA francs ($3.3, 3 euros).

Senegal's government, in common with others around the world, has restricted travel between cities in a bid to curb coronavirus infections, and reduced opening hours for markets and shops.

Despite initial fears the virus would devastate poor African countries, the continent has so far recorded low infection rates compared to virus-stricken Europe and the United States.

African anti-virus efforts have nonetheless dealt a heavy economic blow, with retailers especially hard hit as governments have shut markets and restricted the flow of goods and people.

The sudden change has driven some contagion-wary consumers to use e-commerce platforms.

Sall, for example, uses a new Senegalese platform named Rapidos, which has partnerships with supermarkets, bakeries and pharmacies.

Set up two years ago, the firm is now doing a roaring trade.

"Home deliveries have gone up 90 percent," said company official Mohamed Badiane, adding that orders for Ramadan essentials such as dates are strong.

Precise data on African e-commerce trade is hard to come by. But officials who spoke to AFP suggested that the coronavirus crisis has been a boon for some online delivery platforms.

Africa's e-commerce giant, Jumia, appears to be one of the companies benefiting from a virus-driven bump in online sales.

The company has struggled with high operating costs, raising questions over its long term viability.

But in an earnings report on Wednesday Jumia said it had seen a "surge in demand" in early March due to coronavirus restrictions, while noting that supply had also been hit in some countries.

Francis Dufay, the firm's managing director in Ivory Coast, said that there had been an "explosion of orders," with demand currently three times higher than normal.

A similar dynamic is playing out in the continent's most developed economy, South Africa.

"There has been a huge surge in demand," Lynton Peters, a co-founder of the e-commerce firm OneCart, told AFP.

African retailers have been hard hit by coronavirus lockdowns. By JOHN WESSELS (AFP)

"Over the last couple of months we have seen a 500-percent increase in our business, and we have expanded quite rapidly in order to deal with demand," he added.

The uptick in online sales follows years of growth in the sector, which has appealed to a young and urban internet-savvy population, and a growing African middle class.

But e-commerce in Africa still lags behind other parts of the world.

Some 21 million people shopped online in 2017 in Africa, according to a United Nations report, accounting for only 2 percent of the world's total.

Half of those shoppers are also concentrated in just three countries: Nigeria, South Africa and Kenya.

E-commerce has nonetheless grown by 18 percent annually since 2014, the report said, and it is increasingly luring investors.

Many were previously put off by the myriad problems facing would-be e-retailers in Africa, ranging from a lack of street names, to limited internet access and suspicion of online payments.

Amazon, the world's largest e-retailer, is barely present on the continent.

Local players such as Jumia, however, are adapting business practices to overcome hurdles, such as developing their own fleet of delivery drivers, for example.

Some e-commerce business owners hope that locking in previously-wary customers might be a silver lining to the coronavirus crisis.

"The fact that people could not go out has increased awareness and curiosity around online shopping and delivery services," said Jerobeam Pengevally Mwedihanga, who owns an e-grocer in Namibia.

"People have become excited about using delivery services and those who did not know about it now know," he added.

Successes have not been even, however, and many delivery businesses have struggled to cope with strict anti-virus policies.

Dufay, the Jumia official, said that evening food deliveries had collapsed in Ivory Coast because of a night-time curfew in the country.

And in another adverse effect, an increase in online deliveries may spell bad news for restaurants.

"Everyone has become a chef," said Salmi Shigwedha, who owns a local eatery in the capital Windhoek called The Garden Inn.

"Instead of getting home from work too tired to cook, people now actually have time to prepare their own meals,' she added.