We Shall Employ All Legal Means To Stop EC, NIA Evil Conspiracy To Rig The 2020 Elections For NPP ―NDC 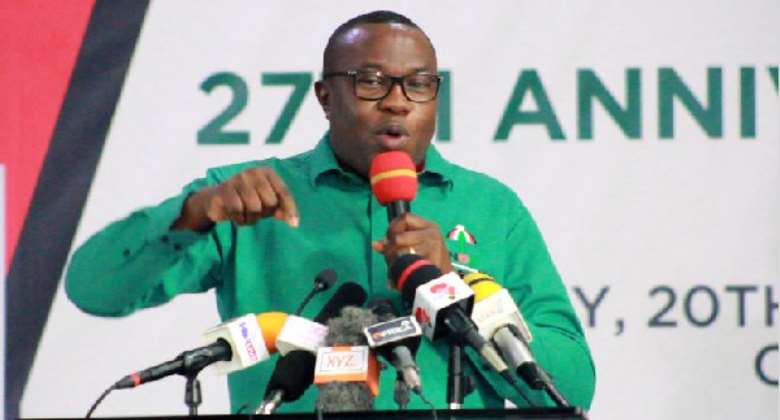 The National Chairman of the National Democratic Congress (NDC), Samuel Ofosu Ampofo says the party will go all out to stop the 'evil conspiracy' of the ruling NPP whom they have accused of scheming with the National Identification Authority (NIA) and the Electoral Commission (EC) to rig the 2020 General Elections.

At a press conference in Accra on Thursday, May 14, 2020, the NDC Chairman alleged that the President of the Republic immediately after being sworn into office in 2017 imitated plans that will allow him to rig the next election to ensure he holds on to power at the end of his term in office.

He explains that the conspiracy started with the exclusion of the Voters’ ID card from the requirements of registration for the national ID card by the Akufo-Addo government.

According to him, it was part of a well-calculated scheme to disenfranchise a good number of Ghanaians from acquiring the national ID card (Ghana card), which was to be used subsequently, as one of the registration requirements in the new voters’ register plan they had long hatched.

“It does appear that the President is not concerned about the future of Ghana, its peace, stability, and the survival of democracy. Prior to becoming President, Akufo-Addo had presented himself as the paragon of excellence where democracy and rule of law are concerned. However, since becoming President, all his actions have unfortunately proven that was all talk, not substance”, Samuel Ofosu Ampofo said at the press conference.

He continued, “Having failed to deliver on his promises to the people of this country and seeing defeat staring glaringly at him, he in conjunction with the Jean Mensah-led EC and the Ken Attafuah-led NIA are desperately scheming to rig the 2020 general elections and hold on to power at all cost. Not even the unusual circumstances we find ourselves in, which require that we pull together for our collective survival as a nation, are enough to deter the actors of this plot from their ungodly act. While our country craves for vital investments and resources to overcome the COVID-19 scourge, President Akufo-Addo, aided by his ever pliable collaborators is bent on wasting huge sums of the taxpayers money to invite trouble for this country.”