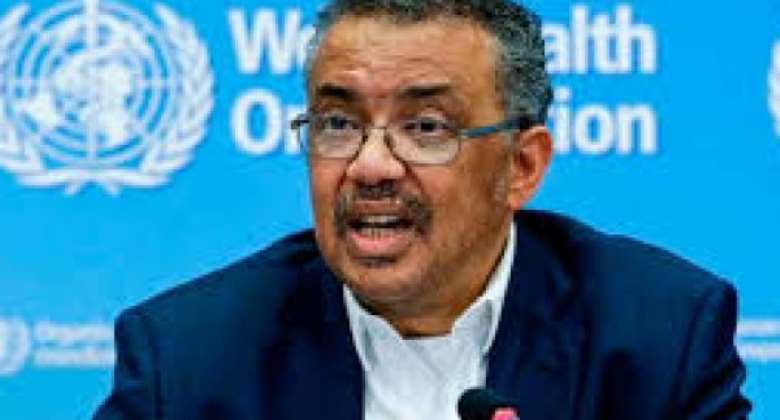 Dr Tedros Adhanom Ghebreyesus, Director-General of the World Health Organisation (WHO) has said, “the impact of the pandemic on people's mental health is already extremely concerning.”

“Social isolation, fear of contagion, and loss of family members is compounded by the distress caused by loss of income and often employment,” he said in response to a policy brief on COVID-19 and mental health released on Thursday.

Reports already indicate an increase in symptoms of depression and anxiety in a number of countries, the policy brief said.

It noted that a study in Ethiopia in April 2020 reported a three-fold increase in the prevalence of symptoms of depression compared to estimates before COVID-19.

The policy brief said mental teams, such as those in Egypt, Kenya, Nepal, Malaysia and New Zealand, had reported increased emergency telephone calls by people with mental health problems amid the pandemic.

In addition, the WHO said: “Care systems have been affected by mental health staff being infected with the virus and the closing of face-to-face services.

“Community services, such as self-help groups for alcohol and drug dependence, have, in many countries, been unable to meet for several months.”

Apart from frontline health workers, other groups that are particularly at risk of COVID-19-related “psychological distress” are children and adolescents; women juggling home-schooling, working from home and household tasks; older persons; and people already with mental health conditions.

It said: “Stay-at-home measures have come with a heightened risk of children witnessing or suffering violence and abuse.

“Children with disabilities, children in crowded settings and those who live and work on the streets are particularly vulnerable.

“A study carried out with young people with a history of mental health needs living in the UK reports that 32 per cent of them agreed that the pandemic had made their mental health much worse,” the policy brief said.

It warned that there was an increase in alcohol consumption, which “is another area of concern for mental health experts”, adding: “Statistics from Canada report that 20 per cent of 15-49-year-olds have increased their alcohol consumption during the pandemic.”

Dr Tedros said: “It is now crystal clear that mental health needs must be treated as a core element of our response to and recovery from the COVID-19 pandemic.

“This is a collective responsibility of governments and civil society, with the support of the whole United Nations system.

“A failure to take people's emotional well-being seriously will lead to long-term social and economic costs to society.”

Dévora Kestel, Director of the Department of Mental Health and Substance Use at the WHO, said there was now an urgent global need “to build a mental health system that is fit for the future”.

She added: “This means developing and funding national plans that shift care away from institutions to community services, ensuring coverage for mental health conditions in health insurance packages and building the human resource capacity to deliver quality mental health and social care in the community.”

Meanwhile, another WHO report said that although people were living longer and healthier lives today, COVID-19 was “causing significant loss of life, disrupting livelihoods, and threatening the recent advances in health and progress towards global development goals”.

This was highlighted in the 2020 World Health Statistics published on Wednesday.

The Statistics showed that the biggest gains were reported in low-income countries, which saw life expectancy rise 21 per cent or 11 years between 2000 and 2016, compared with an increase of four per cent or three years in higher income countries.

“One driver of progress in lower-income countries was improved access to services to prevent and treat HIV, malaria and tuberculosis, as well as a number of neglected tropical diseases such as guinea worm,” the Statistics highlighted.

“Another was better maternal and child healthcare, which led to a halving of child mortality between 2000 and 2018.”

But immunisation was under threat, as well as services for noncommunicable diseases (NCDs) such as cancer, diabetes, heart and lung disease, and stroke, which, in 2016, accounted for 70 per cent of all deaths worldwide, 85 per cent of which were in low and middle-income countries.

“Only between one-third and one-half the world's population was able to obtain essential health services in 2017, the WHO noted.