By Rebecca Tapscott - The Conversation
Article 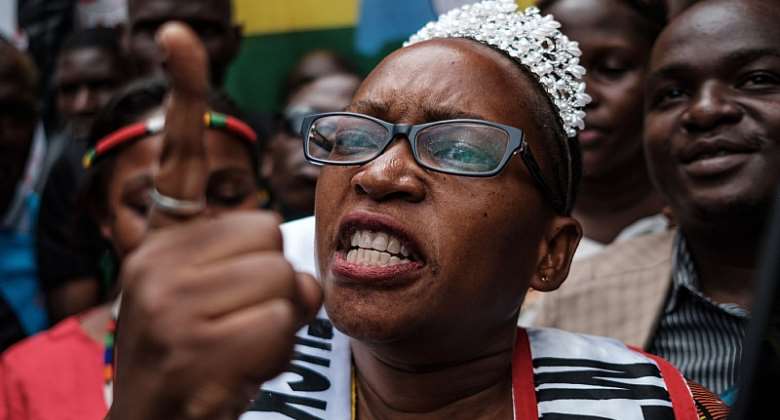 Ugandan activist and writer Stella Nyanzi outside a Kampala court after a ruling in her favour against President Yoweri Museveni - Source: Sumy Sadurni/AFP via GettyImages

The past two decades have seen the rise of new forms of authoritarianism. These modern authoritarian regimes use diverse tactics to keep democratic institutions weak.

For example, governments in Ethiopia, Malawi, Nigeria, Senegal, South Africa, and Uganda have formally decentralised power under the guise of democracy, development, and diversity, while in practice weakening and fragmenting local government .

Such regimes do not eliminate democratic spaces completely, rather they make them fragile and uncertain. Citizens can criticise the regime, they can vote for the opposition, and they can bring cases to court. But there is the ever-present possibility that the regimes will intervene to restrict collective action and stifle democratic voice.

Take Uganda, where President Yoweri Museveni has held power since 1986. Museveni adopted seemingly democratic policies of decentralisation , multi-partyism , and even participation in the International Criminal Court . These measures have only served to centralise the regime's control.

Uganda's democratic space has been described as “ shrinking ”. Increasing political intimidation and patronage have steadily undermined the quality of Uganda's elections. Most protests these days are met with heavily armed police, who deploy teargas and rubber bullets to disperse crowds.

Such regimes raise important questions around the ability of citizens to claim rights and resources from the state. Citizens who attempt to make collective claims, whether at the ballot box or in the streets, face high risks. These include arrest, detention, physical or economic harm, and even death. So how can these citizens adapt to make their voices heard?

Scholarship has already identified numerous non-violent approaches that citizens employ in politically-repressive contexts. These approaches – both novel and timeworn – include humour , art , and rudeness .

Our research examines another form of ancient, non-violent protest: the baring of naked bodies. During our study in Uganda, my co-authors and I found that although public nakedness can have political effect it is not without its risks.

Ugandans employ naked protest in situations they view as desperate, where authorities are violating fundamental rights. Our analysis suggests that naked protest in Uganda is a “last resort” for the weak and vulnerable in a public space that is heavily militarised and policed.

Naked protest therefore offers a window into the strategies that ordinary citizens can use to exercise political voice in contexts marked by overt and covert forms of repression. It illustrates that though authoritarian states seek to dominate and control public space, citizens can still use creative means to disrupt the infrastructure upon which this dominance is built.

Public nakedness has been documented as a means of political protest worldwide, in vastly different cultural contexts from India to Russia . In Kenya, it has been used from pre-colonial times to the modern day .

In a context such as Uganda's, it is perhaps surprising that citizens would willingly take off their clothing in protest. This makes them even more vulnerable than they already are. But sometimes they do. A closer examination reveals both the opportunities and limitations of collective protest in such regimes.

Nakedness as a form of collective public protest has been used across Uganda by ordinary citizens when they feel that there is no alternative. In a highly publicised case, Professor Stella Nyanzi stripped to her underwear to protest work conditions at Makerere University in 2016. Women in Kampala had also used it to protest police brutality in 2012.

One of the best-known contemporary cases of naked protest in Uganda occurred in a town called Apaa, northern Uganda, where the government has been attempting to appropriate land for decades. To oppose an anticipated forcible displacement in 2016, the community gathered to protest. At the protest, elderly women stripped naked, cursed the authorities, and rolled on the ground .

By baring their naked bodies and juxtaposing them against the heavily armed bodies of the state's security personnel, citizens employed three types of overlapping and entwined power .

First, they showed that the state cannot control them in a basic and bodily sense, thereby challenging the very foundation of the state's authority. This is biopower.

Second, naked bodies expose strong social and cultural norms. For example, in northern Uganda female bodies are associated with the “wife” or “mother” of the community. People think that they should be protected, and therefore their juxtaposition to the violent bodies of soldiers has strong symbolism.

As a result, it can shift the terms of protest from a political framing to a moral one. In a context where might makes right, a moral framing is much better for ordinary citizens than a political one. This is symbolic power.

Finally, in northern Uganda, nakedness also has certain cultural associations. It can be used interpersonally to curse those who have challenged the moral order. The curse is believed to cause illness and even death. This is particularly relevant for citizens who seek to challenge repressive regimes because, unlike unarmed citizens, the curse cannot be stopped by armoured cars, uniformed officers, or guns – and it can strike at any time after the protest has occurred. This is cosmological power.

These three types of power help us understand why citizens employ naked protest, and how it affects its target – in this case the militarised Ugandan state.

The naked protest in Apaa achieved its short-term goal – the military and government officials who had come to demarcate the contested land left without displacing residents. However, subsequently there have been repeated instances of state violence in Apaa to remove people from the land and hand it over to private investors. Residents have since employed various other tactics to resist. For instance, in 2018, Apaa residents occupied a United Nations compound to defend their land.

Baring naked bodies may be one way for citizens to protest militarised regimes. But in this case, its use demonstrates that the space for public dissent is extremely limited. To strip naked is a last resort. This reflects the constraints placed on exercising political voice, and resultant obstacles to instigating collective political action.

Rebecca Tapscott has received funding from the Centre for Public Authority and International Development (ES/P008038/1) and the Gerda Henkel Foundation's Special Programme on State, Society, and Security

Latest Photo Reports
Catch up with all the political quotes from our politicians.
Advertise here
More Article
ModernGhana Links
Meet the black family that once asked U.S. President Joe Biden to support Immigrants
C-KADD Global’s Reflections On 2022 Budget
Transitioning into cybersecurity with Zero IT background
Good Governance and the Fightback Against Africa’s Economic Slowdown
Ghana Can Become A Regional Maritime Hub Through Digitalization
Mr. White Man: A Knock on the Door of an American Ambassador
Can Naturopathic and Conventional Medical Practitioners Coexist in Ghana?
1.6 Million “Left Behind”: Errors in Ghana 2021 PHC report “exonerate” U.S. Census Bureau
Care for the Elderly in Ghana’s Changing Age Demographic
TOP STORIES