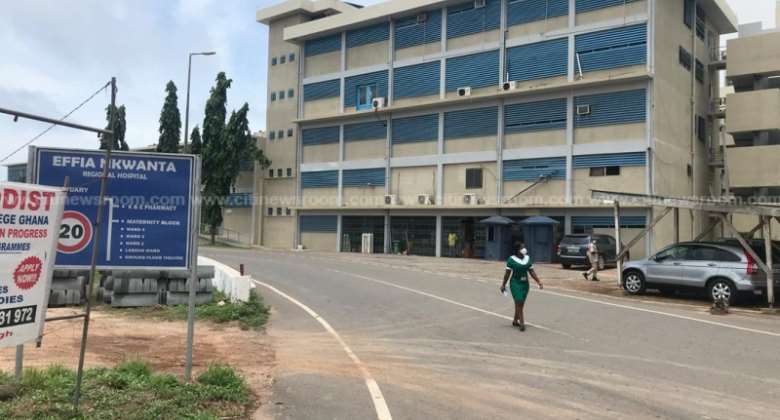 The Effia-Nkwanta Regional Hospital in Sekondi has closed down its Antenatal Care Unit and other two units after a staff tested positive for the novel coronavirus.

The three units in the hospital, are undergoing disinfection among other measures to contain the infection.

The Medical Director of the Hospital, Dr. Joseph Kojo Tambil, who confirmed this to Citi News said the infected staff has been isolated and all other contacts asked to self-quarantine as their samples have been taken for testing.

“One of our staff who had mild symptoms got tested and her results came out positive. So we quickly started taking samples of people that she works with and since she was working at the Antenatal Clinic, we had to take samples of all the staff. She also spent some time at the ENT Department so we also closed down that department and took samples of the staff.”

“Hopefully we would get the results later today and we would determine the way forward. Currently, we are disinfecting those two units and every surface, floor, ceiling to make sure that we minimise the risk of anybody coming into contact of any droplets. Once we get the results then we can determine which staff can work and who cannot.“

Meanwhile, the Industrial Relations Officer for the Western Regional Health Services Workers Union, Jerry Mensah Detse, has told Citi News that the Region has recorded three infections among health personnel but blamed the infections on inadequate PPE for staff.

“We in the Health Services Workers Union in the Western Region have concerns with the things going on in the various hospitals in the region. As I speak to you, three of our members in the region have tested positive for the COVID-19. Two in Effia-Nkwanta and the Takoradi hospital and it is quite scary in the sense that most of our members do not have PPEs to work with.”

“The dangerous part of it is that people from the house can contract the virus from the hospital just like staff. So we are asking the government to try to prioritize the supply of the PPEs. We appreciate that some have been given but they are not adequate for our members. When you go to Apinto Hospital in Tarkwa, Effia-Nkwanta and Kwesimintim Hospitals, we have written several letters for support and so we are appealing to both government and the public to come to our aid.“

Dr. Tambil expressed uncertainty with how soon they could address the situation.

He, however, prayed they get things done within a week and then assess the impact to determine the appropriateness with the reopening of these units.

The Effia Nkwanta Hospital in the Western Region is the main referral hospital.

So far, the region has recorded a total of 61 positive cases of COVID-19 out of over a thousand suspected cases.