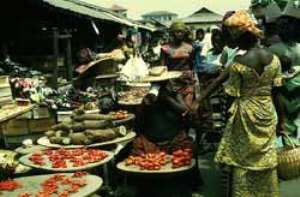 Most people agree that the Municipal Assembly must put in place adequate measures to ensure safety protocols are enforced relative to the fight against the novel coronavirus pandemic in Agona West even if it means temporarily closing down markets, operating the markets on daily basis or running a shift system for the traders as has been done elsewhere inter alia.

Traders and market women are, however, livid and alarmed at the lackadaisical, nonchalant and perfunctory attitude of the MP, Hon Cynthia Mamle Morrison who doubles as Minister of Gender and Social Protection and the MCE, Hon Justina Marigold Assan are both women, yet don’t seem to be bothered by the plight of the suffering people who are predominantly women and children but are constantly at each other’s throats.

Other women who spoke to the media touched on the discrimination in enforcing the guidelines, collection of daily ticket fees despite market closure, inadequate public education and publicity prior to closure of the markets as some of the reasons why the well-intended policy has woefully failed.

It is the considered view of the traders and market women that, the assembly must do whatever it can to lift the temporary closure of the markets by engaging in broader consultations with key stakeholders, improved public education and publicity, distribution of free nose mask etc since majority of the women who are breadwinners are suffering seriously and might be killed by poverty and hunger even before COVID19 does it worse in the municipality.

Above all other considerations and suggestions, the MP and MCE must as a matter of urgency put aside their differences and deal with the issues affecting the traders and market women because poverty and hunger is as real as COVID19 in the municipality and one cannot be dealt with at the expense of the other.