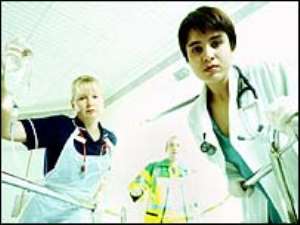 A former professor of medical ethics has called for all forms of euthanasia to be legalised.

He said the law should be changed to enable doctors to withdraw treatment even if patients cannot consent.

But other experts said patients should make a living will if they do not want to be resuscitated.

Professor Doyal said that when doctors withdraw life-sustaining treatment from severely incompetent patients, such as those in a permanent vegetative state, it was effectively euthanasia, the Clinical Ethics journal reported.

"Doctors may not want to admit this and couch their decision in terms such as 'alleviating suffering' but withdrawal of life sustaining treatment from severely incompetent patients is morally equivalent to active euthanasia," he stated.

"If doctors can already choose not to keep uncomprehending patients alive because they believe that life is of no further benefit to them, why should their death be needlessly prolonged?"

Lord Joffe has put together a bill for the House of Lords which would give doctors the right to prescribe drugs that a terminally ill patient in severe pain could use to end their own life, a procedure called assisted dying.

The bill was recently delayed by six months after a vote by peers.

Referring specifically to the Joffe Bill, Professor Doyal who is emeritus professor of medical ethics at Barts and the London School of Medicine claimed, "Some supporters of euthanasia remain silent about non-voluntary euthanasia, presumably because they believe that focusing on voluntary euthanasia offers a better chance of legalisation.

Deborah Annetts, Chief Executive of Dignity in Dying, said: "Dignity in Dying advocates that end of life medical treatment decisions should be based around the competent wishes of terminally ill people.

"The current law is morally and clinically indefensible and as Professor Doyal shows, gives patients too little protection and control.

"Doctors make end of life medical treatment decisions resulting in seven out of every ten deaths in Britain."

But she added: "People who may later lack capacity to make decisions for themselves can choose to enforce their wishes by making a living will (or advance directive) and we do not agree with Professor Doyal that the law needs to be changed for non-competent patients."

Dr Nigel Sykes, consultant in palliative medicine at St Christopher's Hospice, London, said: "Doctors have always seen it as part of their duty to assist their patients to die comfortably. "This does not mean that doctors are causing those patients' deaths.

"I would argue that it is the illness that brings about death, and not the withdrawal of treatment.

"Where I would agree with Professor Doyal is in the suggestion that euthanasia, once legalised, would lead to non-voluntary euthanasia at some point, and this would affect an increasing number of people who are among the most vulnerable in our society."

The British Medical Association dropped its long-held opposition to assisted dying in July last year, voting at its annual conference to adopt a neutral stance on the issue.