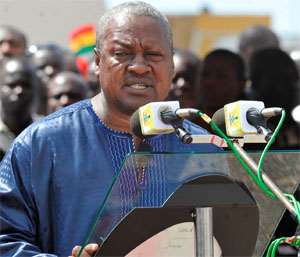 Of course, this is not the first time this writer is highlighting on ex-President John Dramani Mahama’s manipulative politicking. When it comes to manipulations, or deliberately ignoring obvious facts in the public arena that often stand at odds with the general interests of Ghanaians, Mr. John Mahama has an unmatched track record as the then-president and now as an opposition leader.

Just pay close attention to the “calm and relax” manner with which he often speaks about some pressing national issues. Former President Mahama has almost “perfected” a habit that guides him to focus on economic and sociopolitical developments in the country, playing down events unfavorable to him and his NDC party while stressing positively on things that go in favor of his electoral ambitions.

“Serial” manipulators, such as ex-President Mahama, seem to have the remarkable capability of replacing cognitive models that go against their preferences with beneficial ones. It is why almost everyday Ghanaians hear the NDC flag-bearer and his yes-people peddling information in which many of them turn out be untrue. One recent example is when Mr. J.D. Mahama is reported to have boldly claimed that free press was more guaranteed during his incompetent term of office as then-president than is happening under Nana Akufo-Addo’s tenure today.

Concerning media freedom claim, former President Mahama knows down deep in his soul that the state of the media under his government wasn’t anything enviable to write home about. Please, let the skeptics check out the news archives. In fact, the JDM-led NDC regime witnessed many cases of mistreatment of media personnel across the nation. Yet the party’s acclaimed “communicator-in-chief” doesn’t really care peddling those make-believe stories to try to control the minds of the vulnerable electorates that he is the country’s free press icon.

Keep in mind one of the unstated assumptions in the manipulators’ playbook is that the concept of truth is relative in the science of persuasive communication. The foregoing assumes that once a particular narrative is let out, even if it is not true, stone-cold manipulators insist, never retract but keep hammering on the lies until the receivers or the people swallow it fully as the whole truth. In Mr. Mahama’s case—among others—his vantage position as ex-president of this country has immensely helped him figure out the socio-cultural psyches of majority of Ghanaians.

For one thing, he is aware, even on subconscious level, that during his presidency Ghana underwent mismanagement of the highest order, yet many Ghanaians strangely seem to have forgotten the administration’s iniquities, for reasons that appear to baffle Mr. Mahama and his campaign crew, too. For another thing, as unapologetic manipulator, the NDC presidential aspirant takes solace in the fact that 24/7 news media have more than ever made majority of Ghanaians prefer making fast guesses and embrace mental short-cuts to learning how to be media literates by objectively assessing media news contents or communication before taking the baits.

Thus, when he is widely quoted as saying Ghanaians are “forgetful people,” the former president’s reason(s) for drawing that cynical conclusion most likely comes from the above latter point. Generally, people who don’t take the time to analyze messages or communications content fully, tend to miss the salient points; and those people also are most likely to be forgetful. Because of this unfortunate Ghanaian reality of “forgetfulness” Mr. Mahama has found some renew sense of self-confidence in public after years of running Ghana’s economic ship aground.

As of now, Mahama-NDC’s manipulations of the media, for instance, is in full gear regarding the party’s so-called boycott of the Adom FM and the suspension of Mr. Bernard Allotey Jacob the former regional chairperson of NDC in the Central Region. The two moves—boycott and suspension—by Mahama-controlled NDC are purely manipulative techniques not only to suppress dissent coming from pesky but free-minded ex-regional party chairman from the coast but also they’re decisions to put the “fear of God” into the brains of Adom FM media outlet.

Now, unlike drawing awareness to the manipulative tactics through my previous write-ups, this marks the first time this columnist has been compelled to bring to fore the seemingly regressive behavior of the current National Democratic Congress (NDC) presidential candidate. Honestly, Mr. Mahama’s public pronouncements do not square well with the status of an ex-president. The facts are all over the place so one does not need to belabor this point.

Clearly, ex-President Mahama is so “possessed” by political power that his manipulative behavior has now degenerated into regression. Do not take this writer’s word for it; rather, sit back and take a good look at Mr. Mahama’s desperations and visible frustrations expressed via his utterances over the past couple of years. Often when he tries to convey or shares some perspectives on issues of public interest, it is as if is not coming from a former president. Most of them are misleading, incoherent, and unstatesmanlike.

In psychology, regression is when a person (say a child) behaves in a way that isn’t appropriate to his/her age level, status, or personality. For the purpose of this discussion let’s apply regression in the context as to when a former president behaves or talks as if he/she is a former district chief executive or “yentie obiara” crowd. Psychologists identify several triggers of regressive behavior and notable among the causes include but not limited to fear, stress, frustration, shocking life events, and so on.

There is no doubt the 2016 general elections put not only stress, frustrations but also, it was one of the earth-shattering life events in ex-President Mahama’s entire existence. To that end, it has certainly left him frustrated, stressed out, angry as hell, and possibly cause him to harbour some internal insecurities/fears borne out of needless premonitions that Nana Akufo-Addo is somehow “conspiring” with the Electoral Commissioner to rig the upcoming presidential election. In short, former President John Dramani Mahama is displaying behaviors in the public arena that he should have grown or matured out of it as a statesman!