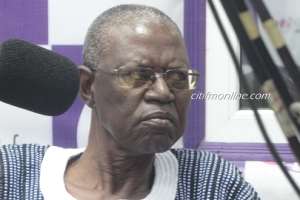 Private legal practitioner and former legislator, John Ndebugri, says he is not convinced about the reasons given by the judge for jailing some former officials of the National Communication Authority (NCA) in the $4 million eavesdropping device scandal.

Three former members of the NCA Board were given prison sentences of a total of 16 years for their roles in the “clandestine” purchase of cybersecurity equipment worth over $4 million.

A businessman, Derrick Oppong who was implicated in the case was however acquitted and discharged on all charges against him.

Also another accused person, Nana Owusu Ensaw was acquitted and discharged by the court of appeal before the judgment on Tuesday.

The case was presided over by Justice Kyei Baffour.

Sharing his opinion on the issue on Eyewitness News, the former legislator for the Zebilla constituency said he may not be in agreement with the reasons provided by the judge.

“As to the three persons who were sentenced to a total of 16 years, I have read the judgement, and I am not as convinced of the position of that judge. The basis upon which the chief accused person was acquitted and discharged on the fact that he is a businessman and he was doing his business, therefore, he couldn't be bothered too much, I don't agree with that totally. And then it [the judgement] then goes into the analysis of the first and the second accused persons who are now convicted.”

Meanwhile, Mr Ndebugri said he was satisfied with the case where Auditor-General (AG), Daniel Domelevo was found guilty of contempt of court.

Mr. Domelevo was found guilty of contempt for failing to respond to a suit in which the Senior Minister was challenging a $1m surcharge on him.

The judge, Justice Botwe, had said the evidence before the court showed that Mr. Domelevo was properly served and should have done the right thing.

In her ruling, however, she noted that due to the important role the Auditor-General plays, she will opt to caution and discharge him instead of sentencing him.

Mr Ndebugri described as ‘benevolent’ the decision of the judge to not hand the Attorney-General a jail term or fine him.

Some Ghanaians have also indicated that the judgement is likely to demoralise the Auditor-General and may be seen as delving the fight against corruption a blow in the face, but Mr Ndebugri thinks otherwise.

According to him, the argument that the case may cause the AG to take a step backwards in his fight against corruption does not hold because “If you think that the auditor general has been doing so great or his office is so important and so he cannot be questioned, how about police officers who are fighting crime on a daily basis and yet when they err we come heavily upon them.”