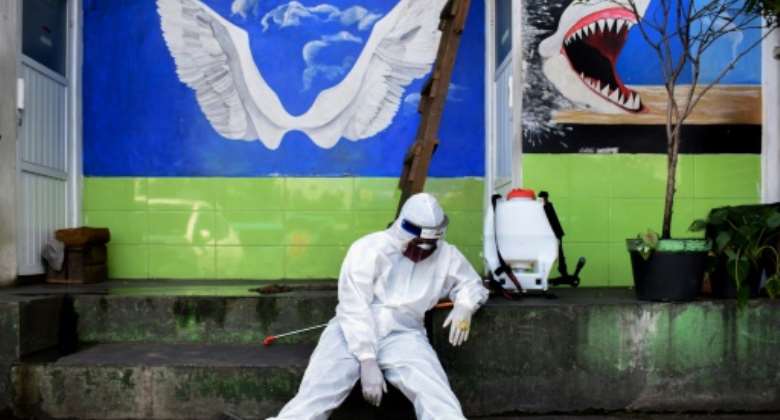 An Indonesian health agency official rests at the entrance to a public toilet as other colleagues conduct COVID-19 testing in Bandung, West Java. By TIMUR MATAHARI (AFP)

The coronavirus may never go away and populations will have to learn to live with it just as they have HIV, the World Health Organization has warned, as the global death toll from the disease nears 300,000.

There were also gloomy forecasts from the US Federal Reserve, which said prolonged shutdowns to stem the spread of the virus could cause lasting economic damage in America.

MoveOn.org stages a protest against the handling of the COVID-19 coronavirus pandemic by US President Donald Trump near the US Capitol in Washington, DC. By SAUL LOEB (AFP)

Washington ratcheted up tensions over the pandemic by accusing China of trying to steal research into a vaccine, while US President Donald Trump upped the rhetoric, with a colourful phrase that could anger Beijing.

"We just made a great Trade Deal, the ink was barely dry, and the World was hit by the Plague from China. 100 Trade Deals wouldn't make up the difference -- and all those innocent lives lost!" Trump tweeted.

An employee wearing protective gear disinfects a shopping mall as a preventive measure against COVID-19 in Caxias do Sul, Brazil. By SILVIO AVILA (AFP)

The United States logged more than 1,800 deaths on Wednesday, bringing the nation's total to 84,059.

The president has increasingly looked to pin the blame on China, where the virus first emerged late last year.

Russian National Guard (Rosgvardia) officers detain a man in front of a supermarket in Moscow after city authorities made it mandatory to wear gloves and a mask in pubic places. By Alexander NEMENOV (AFP)

"China's efforts to target these sectors pose a significant threat to our nation's response to COVID-19," the FBI and the Cybersecurity and Infrastructure Security Agency (CISA) said.

Neither agency offered evidence to support the allegation.

'May never go away'

A vaccine could allow countries and economies to fully re-open from lockdowns and potentially earn millions of dollars for its creators.

A medical worker prepares to test a man for the COVID-19 novel coronavirus in Wuhan, China. By Hector RETAMAL (AFP)

But the WHO said the virus may never be wiped out entirely.

"This virus may become just another endemic virus in our communities and this virus may never go away," said Michael Ryan, the global health body's emergencies director in Geneva.

"HIV has not gone away -- but we have come to terms with the virus."

A health worker wearing protective gear sits on an ambulance next to the body of a COVID-19 victim before burial at a graveyard in New Delhi. By SAJJAD HUSSAIN (AFP)

The prospect of the disease hanging around leaves governments across the world facing a delicate balancing act between suppressing the pathogen and getting economies up and running.

Trump has been pushing for a swift resumption of economic activity in the US, often against the advice of health officials, as he tries to jumpstart the world's largest economy before a November election.

People queue while waiting their turn to be tested for COVID-19 in the Kawangware slums of Nairobi, Kenya. By LUIS TATO (AFP)

In an excerpt of an interview with Fox Business to air in full on Thursday, Trump said: "I totally disagree with him on schools".

The tensions between health and the economy were thrown into sharp relief Wednesday when Federal Reserve Chief Jay Powell warned of a potential "wave of bankruptcies" that could cause lasting harm to the world's largest economy.

Powell, who has launched a host of key programs to support credit markets and provide funds directly to companies, said there are limits to how far the Fed can go.

Re-opening continues in earnest across Europe, with officials pushing ahead with plans to restore summer tourism even as fears persist of a second wave of infections. By Vincenzo PINTO (AFP)

"We can make loans to solvent businesses," Powell said, but cautioned that "The passage of time is all that is needed for a liquidity problem to turn into a solvency problem."

Re-opening continued in earnest across Europe, with officials pushing ahead with plans to restore summer tourism even as fears persist of a second wave of infections.

A drone made for medical supply deliveries is put on display at Berlin's Charite university hospital as part of the German government's drone action plan. By Odd ANDERSEN (AFP)

Desperate to save millions of jobs, the European Union set out proposals for a phased restart of travel, with border controls to be eventually lifted, along with measures to minimise transmission.

Some beaches re-opened in France on Wednesday -- but only for swimming and fishing -- and people in England were allowed to leave their homes more freely.

A truck disinfects the streets, as a preventive measure against the spread of the novel coronavirus, COVID-19, in Bogota, Colombia. By Raul ARBOLEDA (AFP)

But in Latin America the virus continued to surge, with a 60 percent leap in infections in the Chilean capital of Santiago, prompting authorities to impose a total lockdown on the city.

In Argentina, officials were watching Buenos Aires warily after one of its poorest and most densely populated neighbourhoods showed a spike in cases.

Health experts have warned of potentially devastating consequences as the virus spreads through the developing world, where medical systems are underfunded and effective quarantine is often not possible.

MoveOn.org stages a protest against the handling of the COVID-19 coronavirus pandemic by US President Donald Trump near the US Capitol in Washington, DC. By SAUL LOEB (AFP)
0

In northern Nigeria, concerns that the virus is spreading have even seen hospitals shut their doors to the sick.

Civil servant Binta Mohammed said she had to watch her husband die from "diabetic complications".

But there were also bright spots in the battle. Mauritius declared temporary victory against the virus, saying it had "zero" patients and had not documented a single new case in 17 days.

The Indian Ocean island nation had initially surged ahead of other eastern African countries in terms of caseload, hitting a peak of 332 six weeks into its outbreak. Ten people died.

But following one of the strictest lockdowns in Africa, the country has turned the tide.

"We have won the battle thanks to the cooperation of the public," said health minister Kailesh Jagutpal.

"But we have not yet won the war."