Tale of the shrinking dinosaurs 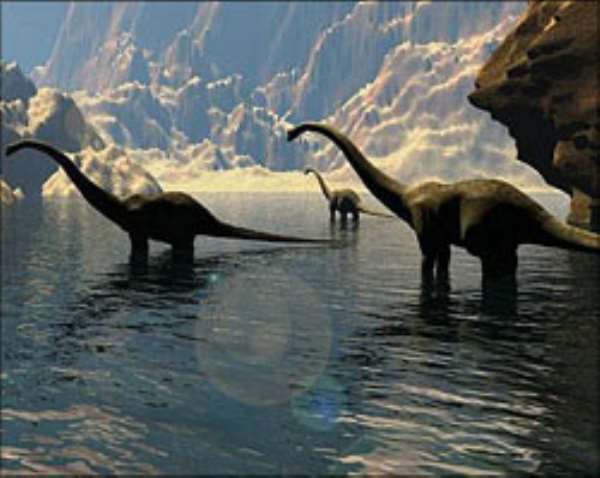 Fossils from a new species of a 150 million-year-old dwarf dinosaur have been found in northern Germany.

Scientists initially said they suspected that the remains from more than 11 sauropods (meaning lizard-footed) were from young dinosaurs.

But an analysis of their bones showed that they were small adults that probably lived on an island during the late Jurassic period.

Professor Martin Sander, of the University of Bonn in Germany, said: "It is the first case of island dwarfing proven for sauropod dinosaurs."

Sauropods were the largest animals to have lived. With their long necks, massive tails, small heads and stout legs they weighed on average about 20 tonnes and measured 20 metres in length.

The biggest grew to 80 tonnes and were as long as 40 metres.

By contrast, the new dwarf species, called Europasaurus, was about the size of a small rhinoceros or a big buffalo.

"This one is minute but it is still a big animal," said Sander, who reported the finding in the journal Nature.

The bones were discovered in marine beds in northern Germany. During the Jurassic period, sea levels were much higher than today so much of central Europe was under water.

Dwarfism is a common phenomenon on islands.

The scientists believe the animals' size decreased because they lived in an area where sea levels rose and land masses shrunk.

Another possibility is that they moved as large animals to islands and shrank within a few generations because of limited resources.

Their small leg bones had led scientists to believe that they were young dinosaurs.

But Sander and his team took cores from the leg bones to determine the age of the dinosaurs and studied them further.

"The microstructure of the bone is really well preserved. You can see where the cells were and the blood vessels," he said.

By comparing the size of the bones of the dwarf dinosaurs with their closest ancestors and descendants, the scientists determined how old they were.

The smallest upper leg bone they analysed was 16cm long and the biggest 50cm.

Dwarf dinosaurs with 50cm leg bones were fully grown, but in other species that would have represented a young animal.

Their closest relatives had femurs three or four times that length, the scientists said.