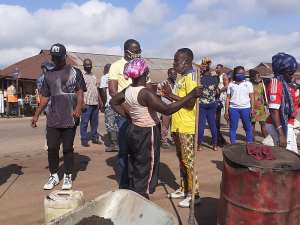 The Atiwa East District Assembly, under the leadership of Hon. Lawyer Kwabena Panin Nkansah and in collaboration with the member of parliament Hon Abena Osei Asare have initiated a lot of preventive measures against COVID-19.

The district by far has recorded no case of the coronavirus. It has been eight weeks already since the country recorded its first two cases of the corona Virus.

On the 13th of May 2020, the district assembly called on the traditional authorities, departments and agencies, assembly members, security and ambulance service, political parties, traders, transport unions and the general public to embark on a cleanup exercise in Anyinam.

He added that the death toll in other countries have revealed that people with other medical conditions are at a higher risk of dying when they get infected with the virus. He noted the need for a collective effort to fight against the spread of the virus.

Hon Lawyer Kwabena Panin Nkansah commended the efforts of the government and the collaboration of his people for standing strong during these trying times.

Market days have been suspended and a satellite market has been created in a school park. These measures have by far has ensured that the social distancing policy is adhered to locally.

The assembly consistently disseminates information on preventive measures through the information centers and by the assembly announcement van. The District Chief Executive, Hon. Lawyer Kwabena Panin Nkansah mentioned that the clean-up exercise was going to continue on the 14th of May 2020.