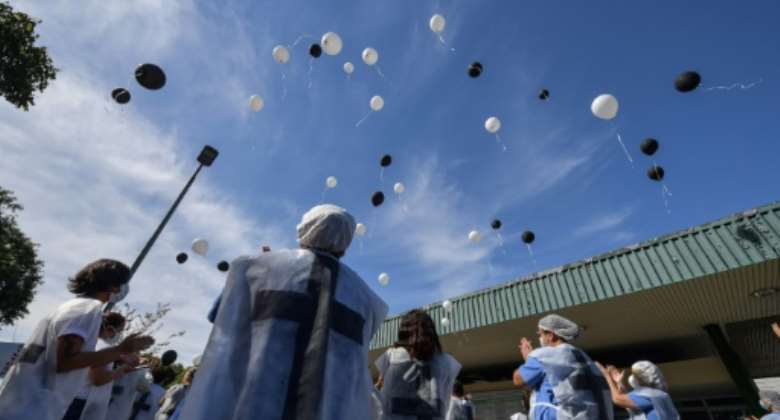 Health workers in Brazil honour colleagues who have died of the novel coronavirus. By Nelson ALMEIDA (AFP)

Europe moved ahead with its emergence from coronavirus lockdown on Wednesday and laid out plans for summer tourism, but the pandemic gathered pace elsewhere and America's virus pointman warned against reopening the United States too quickly.

Britain followed France, Italy and Spain in allowing people more freedom to leave their homes, with residents of England able to exercise outdoors or go to work if necessary.

Austria said its borders with Germany would reopen from mid-June and Berlin said it aimed to end virus checks at its land borders in about a month.

Desperate to save millions of tourism jobs, the European Union set out plans for a phased restart of travel this summer, with EU border controls eventually lifted and measures to minimise the risks of infection, like wearing facemasks on shared transport.

World toll of coronavirus infections and deaths. By (AFP)

"Today's guidance can be the chance of a better season for the many Europeans whose livelihood depends on tourism and, of course, for those who would like to travel this summer," EU Commission executive vice president Margrethe Vestager told reporters.

But with the global death toll from the coronavirus exceeding 292,000, the picture was grim in other parts of the world.

Russia, now the country with the second-highest number of virus cases, recorded more than 10,000 new infections after authorities this week eased restrictions to allow some people back to work.

Desperate to save millions of tourism jobs, the European Union set out plans for a phased restart of travel this summer. By Vincenzo PINTO (AFP)

Brazil registered its highest virus death toll in a single day, with 881 new fatalities bringing the total to 12,400, and the country was emerging as a new global hotspot despite President Jair Bolsonaro dismissing the pandemic as a "little flu".

Fears were growing of a second wave of infections in China, with the northeastern city of Jilin put in partial lockdown and Wuhan, where the virus first appeared last year, planning to test its entire population after clusters of new cases.

And the United States, which has confirmed more than 1.36 million cases, saw a sharp rise in fatalities, with 1,894 new deaths reported on Tuesday after daily tolls fell below 1,000.

The country's top infectious diseases expert Anthony Fauci issued a stark warning about the dangers of resuming normal life too soon, saying a run of 14 days with falling cases was a vital first step.

"If a community or a state or region doesn't go by those guidelines and reopens... the consequences could be really serious," he said Tuesday.

"There is a real risk that you will trigger an outbreak that you may not be able to control."

Fauci said the true number killed by the epidemic in the US is likely greater than the official toll of over 82,000 -- the world's highest.

Facing a re-election campaign later this year, President Donald Trump is pressing for rapid steps to get the US economy moving again, despite warnings from health officials.

Countries around the world are grappling with how to reopen businesses after the pandemic forced half of the planet into some form of lockdown and ground the global economy to a near-halt.

Medical staff take a blood sample from a vendor at a market in Makassar, Indonesia. By Opu Sendang (AFP)

US Democrats on Tuesday unveiled a $3 trillion virus response package, the largest yet, to fund efforts to fight the pandemic and provide emergency payments to millions of American households.

Indian Prime Minister Narendra Modi announced a $270 billion economic stimulus as the Asian giant's economy lumbers back to life after a prolonged shutdown.

Its giant railway network also restarted, despite a recent surge in infections.

The country of 1.3 billion imposed a strict lockdown in late March, which Modi's government has credited with keeping cases to a modest 70,000, with around 2,300 deaths.

Health experts have warned of the potentially devastating consequences as the virus spreads through the developing world, where health care systems are under-funded and isolation regimes are often not possible.

In northern Nigeria, surging death tolls have sparked fears that the virus is spreading, with a team of government investigators saying hundreds of deaths were suspected to be linked to the pandemic.

Making the problem worse, hospitals have shut their doors to the sick out of fears over the virus -- meaning treatment for a raft of ailments has stopped.

A monk walks in front of a giant Buddha statue wearing a face mask at Wat Nithet Rat Pradit temple in Pathum Thani outside Bangkok. By Mladen ANTONOV (AFP)

Civil servant Binta Mohammed said that she had to watch her husband die from "diabetic complications" after he was turned away for treatment.

But there were stories of hope amid the gloom.

A 113-year-old woman, believed to be the oldest person living in Spain, was reported to have beaten the coronavirus at a retirement home where several other residents died from the disease.

Maria Branyas became infected in April but fought off the illness during weeks of isolation in her room.

Her daughter said her mother was "in shape, wanting to talk, to explain, to reflect -- she has become herself again."