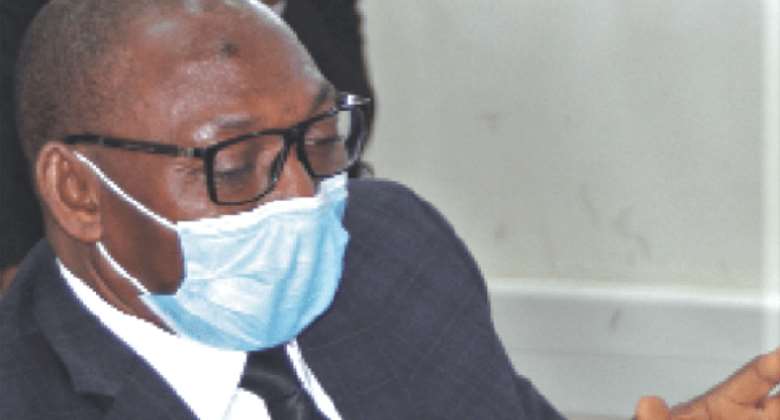 A nominee for the Supreme Court, Mr Justice Clemence Honyenuga, failed to secure unanimous approval from the Appointments Committee of Parliament (ACP) when he appeared before it for vetting yesterday.

The committee voted on a 10-7 approval.
However, the other nominee, Mr Justice Issifu Omoro Tanko Amadu, who was also vetted on the day, had unanimous approval.

Full debate
A member of the committee, Mr Samuel Okudzeto Ablakwa, told the Daily Graphic last night that since Justice Honyenuga had approval based on majority decision, the report on his nomination would be sent to the plenary of Parliament for a full debate and for a vote to be taken.

“If Justice Honyenuga had won by consensus like his colleague Amadu, it means the report to the plenary will just follow the motion and it will be a simple voice vote and not a rancorous debate for a ‘yes’ and ‘no’ vote,” the National Democratic Congress (NDC) MP for North Tongu said.

“The Minority was not convinced he was forthright and sincere. He breached several provisions in rules 1, 2, 5 and particularly 6 (s) of the Code of Conduct for judges and magistrates which frowns on judges endorsing a political office holder,” he added.

The New Patriotic Party (NPP) MP for Krachi East and member of the ACP, Mr Michael Gyato, confirmed that the committee voted on Justice Honyenuga when it went into conclave, but did not give details.

He, however, told the Daily Graphic that the matter on the appointment of Justice Honyenuga would go to the plenary for conclusion.

How it started
When Justice Honyenuga went before the committee, the MP for Tema East, Mr Daniel Nii Kwartei Titus-Glover, drew his attention to how he was recriminated for making a statement at a durbar of the chiefs and the people of the Afadzato South District in the Volta Region praising the President, which made many Ghanaians uncomfortable.

The MP, therefore, urged the nominee to use his vetting as an opportunity to, as a judge and traditional ruler, share with the committee what he really said at the festival.

Responding, Justice Honyenuga said at the durbar, as culture demanded, the mantle to welcome the President “fell on me as the longest -serving paramount chief in the district”.

He said he was mandated to read the welcome address on behalf of the chiefs and the people of the district.

He said after the event, he noticed that the Daily Graphic, which covered the event, had misrepresented the true fact of what took place.

He said per the Daily Graphic report on the durbar, he had invited the President to visit his area.

“The Daily Graphic did not report that the event took place at the district capital but instead reported that the President came to my area. Again, the newspaper did not report that I spoke for and on behalf of all the chiefs and the people of the Afadzato South District,” he said.

He said while reading the speech, he had not intended to endorse the President, saying: “Our understanding was that we were wishing him well, as had been happening in this country for a long time.”

The Court of Appeal judge said what he said was a collective observation of the chiefs of the district and not his personal view.

Apology
He apologised to anyone who might have been offended by the statement he had read praising the President.

Hiccup
There was a little hiccup in the vetting of the nominee when the Chairman of the committee, Mr Joseph Osei-Owusu, refused to admit a question posed by Mr Ablakwa, leading to the Minority leaving the chamber.

The North Tongu MP had sought to ask Justice Honyenuga whether his statement did not amount to contravening the ethics of his profession as a judge, since he was being political with his endorsement of the President.

Before Justice Honyenuga could answer, Mr Osei-Owusu intervened, explaining that the nominee had already clarified his position on the statement he had read.

But the Minority Leader, Mr Haruna Iddrisu, objected to the intervention by the chairman, saying: “We are dissatisfied with your ruling in refusing to admit this particular question by Honourable Okudzeto Ablakwa, since he was only following up with a question by Mr Titus-Glover.”

He, therefore, urged the chairman to allow the nominee to answer the question, since he was capable of doing so to vindicate himself.

After a fruitless attempt by Mr Iddrisu to get the chairman to back down on his position and allow Mr Ablakwa to sail through with his question, the Minority members on the committee left the Chamber.

After about 10 minutes, the Minority group returned to the Chamber, with members crafting various questions on the matter of the “presidential endorsement” by Justice Honyenuga.

Question after question, the nominee responded that he had not indulged in politics with the statement.

“We (chiefs) did not endorse the President: we only wished him well,” he told the committee.

According to Justice Honyenuga, the issue of praising Presidents at durbars of such nature had become a convention in the country and was, therefore, not anything new.

He said it was the way chiefs use to attract development to their areas.

“This thing has been happening since colonial times,” he said.

No political case
Answering a question on whether there was any case considered ‘political’, the nominee said judges did not consider any case “a political case”.

According to him, judges only considered cases on their merit and the evidence presented by parties in a case.

Capping of justices
He suggested the caping of justices at the Supreme Court, saying that putting the number at 17 would ensure the expeditious adjudication of cases at the highest court of the land.

“I am, therefore, proposing that we can give an upper limit of the Supreme Court justices at 17, and that should be done with an amendment of Article 128 (1) of the Constitution,” he said.

Balance in appointment
Touching on regional appointment of justices to the apex court, he stressed the need to ensure balance in the selection of justices based on merit.

“If I am approved, I will be the fourth from the Volta Region. So regional balance in appointments must be considered on merit, so that one region will not feel it is not being taken care of from the Supreme Court,” he said.

Decongest prisons
Responding to a question on the need for Ghana’s prisons to be decongested to curb the spread of the COVID-19 among inmates, Justice Honyenuga, who had been the head of the Justice For All Programme for the past 16 years, said most prisons in Ghana were congested due to lack of infrastructure.

He said currently prison cells meant for between 25 and 30 inmates had about 120 inmates, describing the situation as terrible.

“If this pandemic gets to the cells, it could wipe away all the human beings there,” he added.