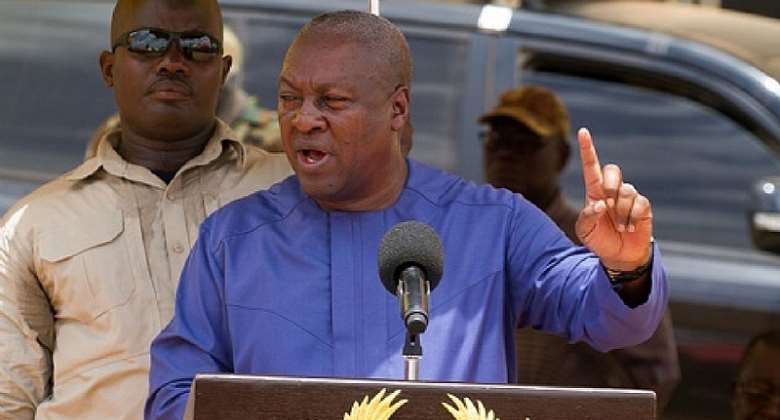 “Shadow Presidents” are a fairly normal occurrence in any healthy and robust constitutional democracy, for the instructive information of Mr. Abdul-Malik Kweku Baako, the Editor-Publisher of the New Crusading Guide (See “ ‘It Seemed We Had a Shadow President and a Parallel Administration’ – Kweku Baako” PeaceFM.com / Ghanaweb.com 5/10/20). In Britain, for example, shadow ministers are a normal fact of Westminster democratic political culture. Actually, what we had in Ghana in the wake of the apocalyptic onslaught of the COVID-19 Pandemic was a hopelessly failed former President John Dramani Mahama’s farcical and scandalous attempt to violently wrest power from an inimitably competent and visionary President Addo Dankwa Akufo-Addo.

It was at once farcical and outrageous because in 2014, when the highly localized Cholera Epidemic struck the country, the Mahama Posse literally got carried away by the current of the creek of this most preventable canker, and Ghana had to be promptly rescued by several of our so-called traditional Western-European partners. Indeed, had President Barack H. Obama not promptly and personally intervened during the Ebola Epidemic in the West African Subregion, about the same time, the situation would easily have been far worse than the current spread of the Coronavirus Pandemic in Ghana under the visionary and socially responsible government of President Akufo-Addo. And then, the all-too-preventable carcinogenic administrative ailment of Dumsor, the perennially erratic power supply, came and literally wiped out about half of all business enterprises in the country.

Under the Dumsor-inflected Misgovernment of Mr. John Dramani Mahama, absolutely no fiscal interventionist incentives were offered even a single one of the legions of the collapsed businesses, whatsoever. It is also significant to underscore the fact that such political and/or administrative incompetence of the then-President John Dramani Mahama occurred in the context of a country whose most talented and able-bodied youths had absolutely no access to a direly needed fee-free Senior High School System. Mr. Mahama, as Ghana’s Main Opposition Leader, would vehemently protest this most creative, progressive and visionary policy initiative. In short, the man clearly appears to think and believe that he has an inalienable constitutional right to wreck the nation and, in the memorable words of Black-Africa’s first Nobel Literature Prize Laureate, Prof. Wole Soyinka, literally rob Ghanaian youths of their future.

Mr. Mahama and his clansmen and political associates and cronies criminally cut backroom and backdoor deals with foreign energy-supply companies, largely companies located in Turkey and the United Arab Emirates (UAE), to murderously inflate Ghana’s energy bills in what has recently come to be known as the AKSA Karpower Payola Heist. Then, of course, there is also the European Airbus SE Mega-Heist that cost the Ghanaian taxpayer millions of dollars in inflated military aircraft prices. If yours truly personally had his way, Candidate Mahama would long have been indicted – this is routinely done in enviably functioning democracies like Israel and, to a quite remarkable extent, even right here in the United States of America – prosecuted, convicted and summarily executed by firing squad, instead of allowing this walking criminal with a farcical sense of entitlement shamelessly re-gun for the Presidency, so that Little Dramani and his unconscionable gang of thievish thugs could continue to fleece Ghana in perpetuity. To be certain, the firing squad part is far more likely to occur in Japan and China than either in Israel or right here in the United States.

Which was also why very recently, I couldn’t help but feel like getting my hands on an AK-47 and the kleptocratic gonads of Mr. Samuel Okudzeto-Ablakwa, when this North-Tongu Trokosi Nationalist Western Togoland Platoon Commander had the chutzpah to call for the “Redistribution” of the nation’s wealth. Now, Dear Reader, you know what these diehard Trokosi Nationalist Goon Capos mean when they talk about the “radical” and/or “revolutionary” redistribution of our nation’s wealth. You damn well know whose wealth these pathological mega-thieves are talking about. You see, in establishing his COVID-19 Medical Team, Little Dramani was hoping that Ghanaian citizens and voters may have so soon and naively forgotten about his Senchi Circus Act, that ended up amply demonstrating that this veritable chicken-brained payola-drinking madman had absolutely no worthwhile contribution to make towards the development of Ghana, besides taking our beloved country back into the pristine backwoods of the GIHOC-dismantling and judiciary-conflagrating Rawlings-led junta of the so-called Provisional National Defense Council (PNDC).

The unspeakable pity, in the words of Prof. Soyinka, is the fact that so nihilistically blockheaded have the members of the Youth Wing of the National Democratic Congress been made by the Mahama Posse, that these cocaine-addled young men and women actually believe that these future-stealing Mahama Team of Robber-Barons really have their interests at heart.