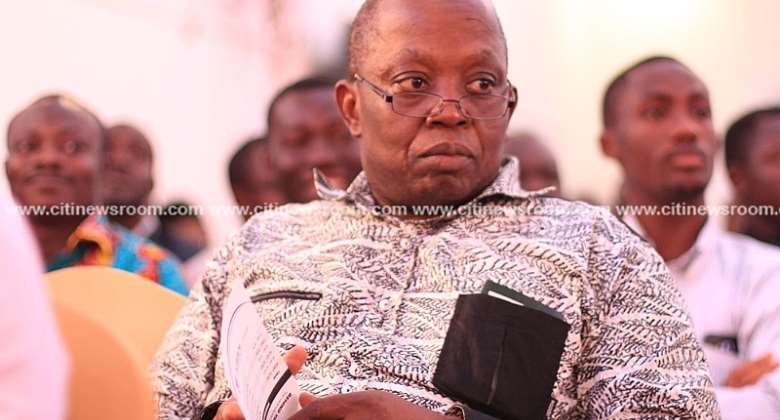 Mr. Domelevo was found guilty of contempt for failing to respond to a suit in which the Senior Minister was challenging the $1m surcharge on him.

The judge, Justice Botwe, had said the evidence before the court showed that Mr. Domelevo was properly served and should have done the right thing.

In her ruling, however, she noted that due to the important role the Auditor-General plays, she will opt to caution and discharge him instead of sentencing him.

Some Ghanaians have questioned why the Auditor-General was not jailed after being found guilty of contempt of court.

According to Yaw Oppong, his client is not interested in having Domelevo put in jail but only wanted his name to be cleared.

“We have what we call non-custodial sentences and that is a form of punishment. Even if you are cautioned to be of good behaviour or asked to forfeit your property, it’s a form of punishment and you have been reprimanded. We had told the court that our client has never been so much interested in the [Auditor-General] being in prison so other remedies that will ensure the maintenance of the sanctity of the court [should be adopted], so the court should be lenient with him. The judge also made a very important statement in the judgment which said that especially in this period of COVID-19, I will not issue a hard custodial sentence. That was very important and given that I think that is fair.”

According to the court, the reason given by Mr. Domelevo for his inability to respond was “untenable and an afterthought.”

Domelevo had said he was busy finishing up an audit report for Parliament hence his failure to respond to the suit.

Commenting on the substantive case, Mr. Oppong disclosed that lawyers for both the plaintiff and the defendant as well as the legal team for Kroll and Associates will in the coming days discuss the next move to take.

“We are going back to the court on the 19th [of May 2020] for further directions of these matters and what we will finally decide on out of time. The bigger case is in court but we the lawyers have agreed that there is an appeal filed by lawyers of Kroll and Associates; so we will decide on the proper approach for it to be consolidated. So we will be going on the 19th for those issues to be ironed out and then we will see the way forward as to whether the whole process is valid or not.”

Hottest Photo Reports
Catch up with all the political quotes from our politicians.
Advertise here
More Headlines
ModernGhana Links
Asantehene charges IGP to combat proliferation of arms
Let's disband witch camps; it's barbaric, indictment on conscience – Jane Naana
Some few cops use the ammunition to engage in criminal activities, weed them out — Asantehene charges IGP
1st Deputy Speaker’s ruling on motion for rescission of approved 2022 budget wrong – Iddrisu Haruna
Court withdraws arrest warrant for Xavier-Sosu after reporting himself
Joe Wise ‘abandons’ seat for 2nd Deputy after chaotic ruling on Minority’s motion
All my appliances have been destroyed by ‘dumsor’ – Otumfuo
‘A Deputy Speaker is not a Speaker, I’m an MP’ – Joe Wise
Adwoa Safo impersonation: Findings from our preliminary investigations disturbing – Minority
TOP STORIES