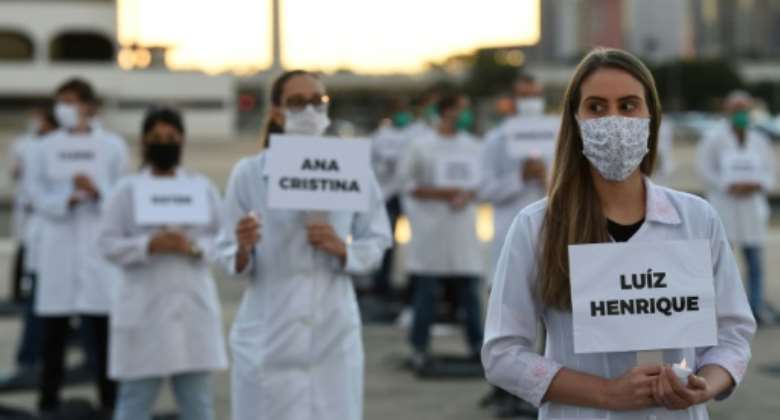 Brazilian nurses honour health workers who have died of the coronavirus at a demonstration in Brasilia. By EVARISTO SA (AFP)

Europe's re-opening gathered pace Wednesday after weeks of coronavirus lockdown, while America's top infectious diseases official warned of uncontrollable new outbreaks if the process happens too quickly in the US.

Austria announced its border with Germany would be unlocked following a two-month shutdown and Britons were allowed unlimited outdoor exercise, despite a global death toll closing in on 300,000.

Curbs that have confined billions to their homes continued easing but the death toll spiked in some of the world's most populated countries, with Brazil, Russia and the US all reporting bad news.

It came as US government expert Anthony Fauci issued a stark warning to Congress about the dangers of resuming normal life too soon, saying a run of 14 days with falling cases was a vital first step.

"If a community or a state or region doesn't go by those guidelines and reopens... the consequences could be really serious," he said Tuesday.

"There is a real risk that you will trigger an outbreak that you may not be able to control."

Fauci said the true number killed by the epidemic in the US is likely greater than the official toll of over 82,000 -- the world's highest.

On Tuesday the US registered 1,894 coronavirus deaths in 24 hours, a steep rise after daily tolls fell below 1,000 on Sunday and Monday.

Lebanese nurses show the heart gesture as they celebrate International Nurses Day at the Rafik Hariri hospital in Beirut. By JOSEPH EID (AFP)

Fauci's cautionary message stands at odds with rhetoric from President Donald Trump, who has pressed for rapid steps to rekindle the devastated US economy before a November election.

Trump has sought to shift focus onto the role played by China, where the virus first emerged in December.

Republican allies in the Senate on Tuesday proposed legislation that would empower the president to impose sanctions on Beijing if it does not give a "full accounting" for the outbreak.

"The Chinese Communist Party must be held accountable for the detrimental role they played in this pandemic," said Senator Jim Inhofe.

Nurses who work at central London hospitals protest with placards outside Downing Street in central London calling for improved conditions and pay for nursing staff. By Tolga AKMEN (AFP)

"Their outright deception of the origin and spread of the virus cost the world valuable time and lives as it began to spread."

In the House of Representatives meanwhile, Democrats unveiled a $3 trillion virus response package, the largest yet, to fund efforts to fight the pandemic and provide emergency payments to millions of American households.

The lifting of lockdowns across Europe has gathered pace this week, with France beginning to re-open primary schools and nurseries.

Couples wearing facemasks dance in a park next to the Yangtze River in Wuhan, in China. By Hector RETAMAL (AFP)

Teachers wore face masks and desks were separated as children filed back into classrooms.

Russia began easing lockdown rules even as infections surged past 232,000 -- now the second most cases in the world after the US.

The nation hit the landmark on Tuesday after a week of reporting more than 10,000 daily cases.

Medical staff take a blood sample from a vendor at a market in Makassar, Indonesia. By Opu Sendang (AFP)

For those braving public transport in Moscow, masks and gloves were a must in line with new anti-virus rules.

"It's protection, I hope it will work," said 48-year-old Natalia Goronok, travelling on the metro.

"It is scary that cases are going up, but people do need to live."

Indian Prime Minister Narendra Modi announced a $270 billion economic stimulus as the Asian giant's economy lumbers back to life after a prolonged shutdown.

Its giant railway network also restarted, despite a recent surge in infections.

The country of 1.3 billion imposed a strict lockdown in late March, which Modi's government has credited with keeping cases to a modest 70,000, with around 2,300 deaths.

A monk walks in front of a giant Buddha statue wearing a face mask at Wat Nithet Rat Pradit temple in Pathum Thani outside Bangkok. By Mladen ANTONOV (AFP)

Fears of a second wave remain across much of the Asian continent, with Chinese state media reporting that the city of Wuhan, where the virus was first detected, plans to conduct tests on the entire 11 million population.

The proposal comes after Wuhan saw the first cluster of new infections since the city re-opened on April 8 after a 76-day lockdown.

A city in the northeast of China partially shut its borders Wednesday and cut off transport links after the emergence of its own local cluster.

But there were stories of hope amid the gloom. A 113-year-old woman, believed to be the oldest person living in Spain, was reported to have beaten the coronavirus at a retirement home where several other residents died from the disease.

Maria Branyas became infected in April but fought off the illness during weeks of isolation in her room.

Her daughter said her mother was "in shape, wanting to talk, to explain, to reflect -- she has become herself again".