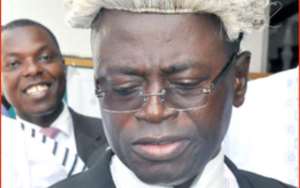 Supreme Court judge nominee Yonny Kulendi has dismissed speculations that his nomination as a judge to the supreme court will increase his financial fortunes.

Answering questions during his vetting Tuesday, the renowned lawyer who was nominated by President Akufo-Addo stated that he is about to commit financial suicide by accepting to serve as a judge at the Supreme Court.

According to him, there must be a national dialogue on the remuneration for public servants including judges which he said will aid the fight against corruption.

“Mr Chairman, People in my village are watching me and they will think that this is an elevation but they don’t know that I am about to commit financial suicide, levels will change.

“We need to have a national dialogue on where we want to go otherwise the Imams will preach their sermons, the pastors will preach but this demon called corruption will bring us down.”

Mr Kulendi also revealed he has a relationship with President Akufo-Addo.

He said if the President had not nominated him as a judge of the highest court of the land, he would have still put his name as a reference on his CV in any job appointment.

Answering a question on how his relationship with the president will affect his judgement on matters involving him, Mr Kulendi who worked in the law chambers of the President told the appointment committee of parliament that bias has not been part of his work culture.

“I have a relationship with the President, and several other politicians and presidents. If the president had not nominated me because of the schedules and workings of his office, you would most certainly find his name on my CV. And I must be candid with that.

“But for me, judges must hold fidelity to the law and be true to your conscience and that ought to be my metrics. I say consider this job. This job is that sacred to me,” he said.