Uganda's army and violence: how COVID-19 is offering hints of change

By Sylvie Namwase - The Conversation 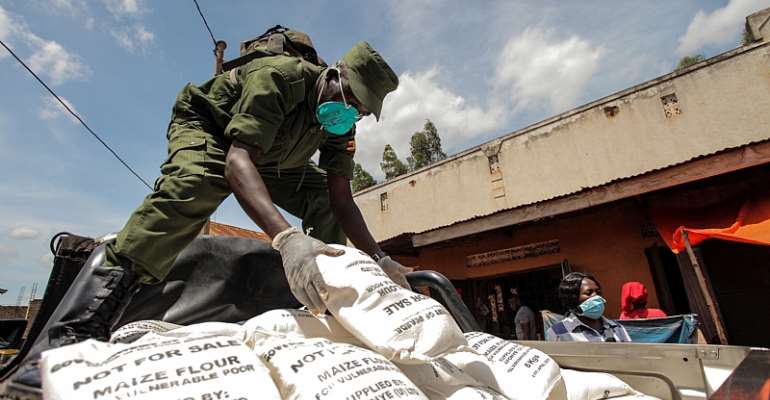 A military officer distributes maize flour in Kampala, Uganda, where the urban poor have been affected by the lockdown. - Source: Hajarah Nalwadda/Xinhua via GettyImages

As the world battles COVID 19, many countries, including Uganda, have deployed national armed forces to boost the capacity of civilian institutions.

For Uganda, excesses during the crisis have resurrected horrors of the country's violent military past . From colonialism through independence to the current government, military power and violence have been central to securing and sustaining political legitimacy.

The regimes under President Milton Obote from 1966 to 1971 and later from 1980 to 1989 were not very different. The army was used to attack civilians based on ethnicity and political affiliation , as well as amass wealth through corruption. More recently, there have been reports of the forces violently suppressing political opponents and other acts of electoral violence . The army today also stands accused of amassing wealth through corruption and wars .

Excessive use of force by security forces in Uganda is pervasive and entrenched. This has been magnified during the COVID-19 crisis. This violence paints a grim picture of civil-military relations in the country. Nevertheless, there are glimmers of hope. Under the current regime, the Uganda People's Defence Forces have gained some reputation as a professional army . This offers optimism for balanced civil-military relations in the future.

In recent months Uganda's army has shown professionalism and discipline in dealing with a number of crises, including a desert locust invasion and a national electricity outage . Uganda's inter-agency COVID-19 taskforce is led by the army. But it has been set up expressly to support the health ministry. This differs from arrangements in countries like Myanmar, Indonesia and Thailand . There, national armies have reportedly marginalised civilian authorities and taken frontline control of the COVID-19 response.

In Uganda, the army's support has been recognised as fundamental to the successful treatment of COVID-19 patients at the country's national referral hospital. And it has set up a 100 bed capacity mobile hospital with intensive care facilities. It is also playing a major role in restricting local and cross border movement.

This has become increasingly important given Uganda's porous borders and the rise in COVID-19 cases in Tanzania and Kenya.

But Uganda has also witnessed a series of reports of misconduct and excesses against civilians by soldiers and the local defence units under their command.

Excessive use of force

Reports emerged early in the enforcement of the country's COVID-19 lockdown that the army and the local defence units forced themselves into people's homes and beat them up. Similar excesses have been reported around the country.

Since colonial times, the police in Uganda have been highly militarised to serve regime interests. Post-independence regimes continued this blueprint, deliberately undermining civilian structures and standards to favour military doctrine and actors within the police force .

The law under which the army falls, and laws that give police officers their powers, have left a lot of leeway to use force . Moreover, the imbalance of power between the police and the army during joint operations can undermine training on the use of force. It also affects the implementation of standards to protect the right to life under human rights law.

The imbalance could also obscure chains of responsibility and accountability. This can leave room for excessive force during joint operations.

In a rare show of responsibility and humility, the defence forces chief apologised to the victims of brutality during the lockdown. And errant officers have since been arrested, tried and convicted .

But Uganda's President Yoweri Museveni, who is also the Commander in Chief of the armed forces, only directed the head of the anti-corruption unit to deal with errant security personnel after a public outcry against the military and police brutality during the early stages of the lockdown.

He also shared her mobile phone number with the public, calling upon affected citizens to report any violations by the security forces.

This was a commendable step which has contributed to reduced excesses. But it is likely a short term intervention that won't extend beyond the COVID-19 crisis. Moreover, this ad hoc ombudsman role is being undertaken by an army officer at the rank of a lieutenant colonel .

This raises concerns around independence and accountability. It is also a role based on a presidential appointment. This means it is not rooted in a legal framework defining its mandate, powers, privileges, limitations and relationship with the civilian population. This infrastructure is critical for such a mechanism to be effective and accountable.

Another legacy of military impunity exposed during the COVID-19 lockdown relates to the personalised and irregular deployment of the armed forces to safeguard private interests. Army officers were deployed to effect a land eviction against market vendors in Kabarole district in the western part of the country.

This was contrary to ministerial guidelines that no evictions should be conducted during the lockdown. It later emerged that the soldiers had been deployed following an order from well-connected individuals with an interest in the land.

The deployment of soldiers in Uganda to safeguard private land interests is fast becoming a trend . It is often done outside the realms of the law and has resulted in antagonism between the army and civilians. This suggests absence of centralised control over army deployment and functions in peacetime.

It also points to the lack of a robust civil-military regulatory framework.

How to achieve a balanced relationship

There is a need for fundamental legal reforms. Firstly, the Uganda People's Defence Forces Act should be amended.

It should outline the protocols under which the army may be deployed during peacetime. This should include training requirements and parliamentary oversight. It should expressly prohibit deployment of the army for private interests. And laws on the use of force during peacetime should be amended to meet the highly restrictive international standards .

Legal and institutional reforms should also be aimed at creating and entrenching an independent oversight mechanism. This needs to be easily accessible by the civilian population so violations can be reported and swift investigations triggered.

The media should also be trained on reporting these violations. Lastly, there should be a national mechanism which enhances awareness about civil military relations in Uganda.

Sylvie Namwase works for the Human Rights and Peace Centre at the School of Law, Makerere University. She receives funding from the Ministry of Foreign Affairs of Denmark under a project on militarisation, sustainable growth and peace in Uganda, which is jointly implemented with the Centre for Resolution of International Conflicts at the University of Copenhagen in Denmark.

By Sylvie Namwase, Post Doctorate Researcher under the DANIDA funded project on militarisation, sustainable growth and peace in Uganda., University of Copenhagen

PPA Scandal: All Sole-Sourced Contracts Should Be Halted, Pr...
12 minutes ago