We Need A New MP – Sunyani East Residents Cry Out 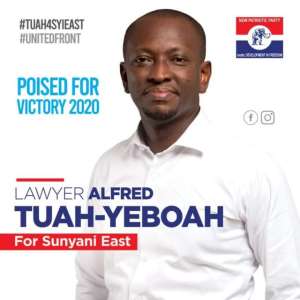 Some angry residents in Sunyani East constituency in the Bono region are making a passionate appeal to the New Patriotic Party (NPP) delegates in the area not to retain the incumbent Member of Parliament for the area in their upcoming primaries.

According to them, considering the slow pace of development in the constituency, which is seen as the eye of the Bono region, there is the urgent need to change the incumbent MP and vote for his contender, Lawyer Alfred Tuah-Yeboah, who they believe could deliver to their expectation.

They also raised concerns about the apparent lack of unity and cohesion among some executives and members of the party in the constituency and said the best way of is vote for a new person, who could bring everyone on board, irrespective of one’s background.

In separate interviews, the residents wondered why their MP, who is also the Majority Chief Whip and until recently Ghana’s Leader to the ECOWAS Parliament has over the years failed woefully to lobby for monumental projects such as tarring and completion of major roads in the area including the New Dormaa road and the execution of some of the government’s flagship projects like One-District, One-Factory in the constituency.

“Besides, we hardly even hear of him talking on the floor of parliament. When he is Sunyani, he is sometimes heard on the radio talking plenty but when he gets to parliament, we hardly hear him talk. Why? Is he afraid or what?”, one resident noted.

A Public Servant in Sunyani, David Owusu-Ansah, described as appalling, the performance of the incumbent MP and said since the Sunyani East seat is not anyone’s family stool, the MP must be changed so that another person could also occupy it.

“What at all has he done here in Sunyani since he became MP for Sunyani East?”, he asked, adding that Sunyani deserves better and so you cannot represent us in parliament for three terms running and there is nothing monumental to show for all these years.”.

A popular radio presenter in Sunyani who spoke on conditions of anonymity said “the incumbent MP, Kwasi Ameyaw-Cheremeh, MUST be changed, because he is not accommodating but rather divisive and vindictive also not grateful at all. He is too emotional in his politicking and that is very bad.”

He believes that Lawyer Alfred Tuah-Yeboah has endeared himself to the party’s activities over the years and demonstrated a strong unifying character both as a leading member of the NPP and also the Regional President of the Ghana Bar Association.

“This is the kind of person Sunyani needs now and I’ll humbly plead with the delegates to consider some of these positive qualities of Lawyer Tuah-Yeboah and vote massively for him”, he stressed.

Information gathered by this reporter indicates that most of the NPP delegates in the Sunyani East constituency have vowed to teach the incumbent MP a bitter lesson during the primaries for neglecting them after they voted for him the last time.

“He only comes around during elections, and after you vote for him; that’s all. We don’t see or hear anything from him again”, one delegate said.